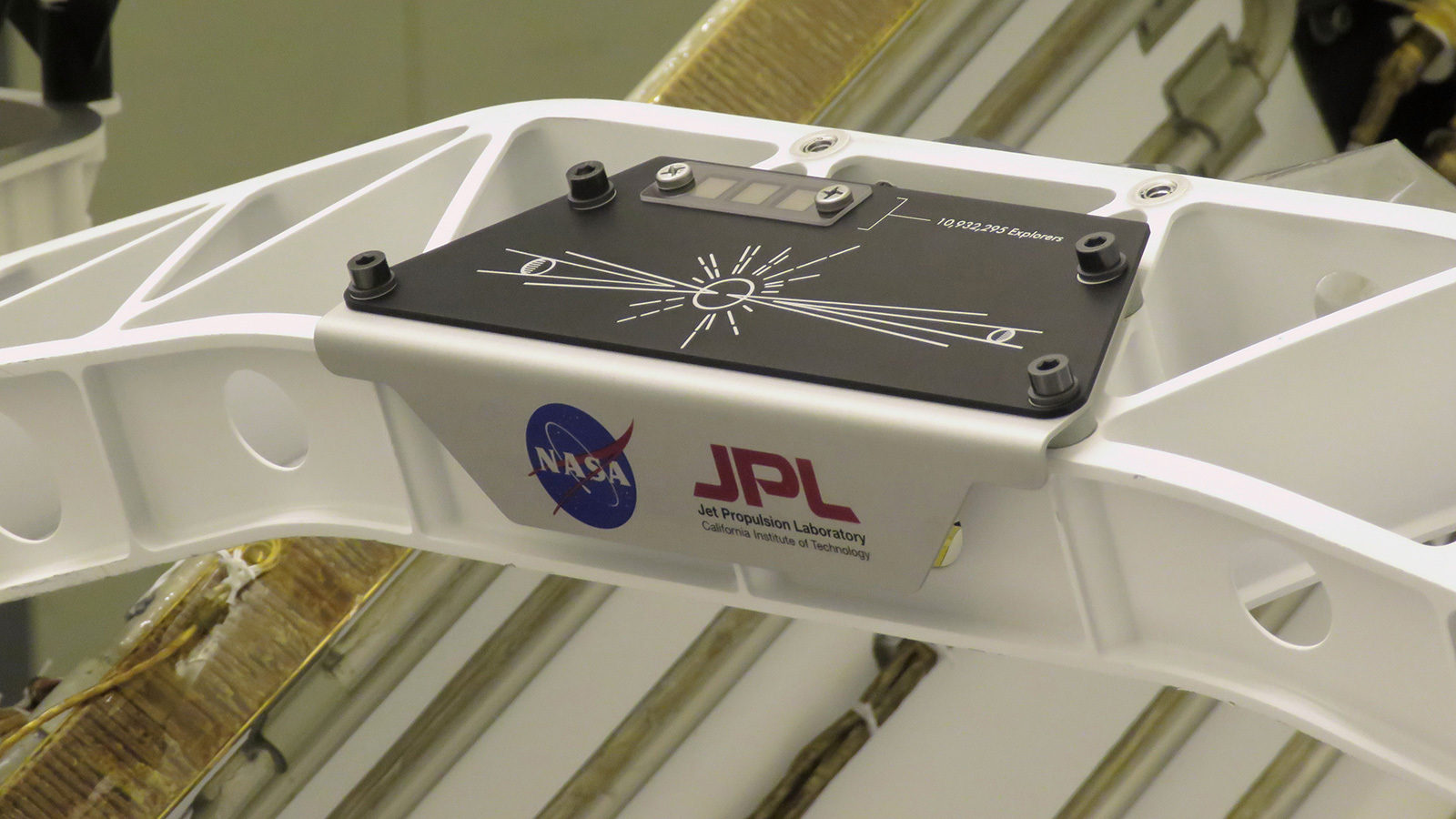 Poster with the words “Send your name”: A poster was placed on the Persevarnce Mars Rover to commemorate the NASA “Send Your Name to Mars” campaign. Three silicon chips (upper left corner) were stenciled with 10,932,295 names and the essays of 155 finalists in NASA’s “Name the Rover” competition. Credit: NASA / JPL-Caltech. Full screen and caption ›

As part of the NASA “Send Your Name to Mars”

; campaign, they were stenciled on three microchips together with essays from the NASA “Name the Rover” competition. Next stop: Mars.

NASA’s “Send Your Name to Mars” campaign invited people around the world to submit their names to travel to the agency’s next rover to the Red Planet. About 10,932,295 people did just that. The names were stenciled using an electron beam on three fingernail-sized silicon chips, along with essays by the 155 finalists in NASA’s “Name the Rover” competition. The chips were then attached to an aluminum plate of NASA’s Perseverance Mars Rover at the Kennedy Space Center in Florida on March 16. Perseverance is scheduled to start this summer and land in the Jezero Crater on February 18, 2021.

The three chips share the space on the anodized plate with a laser-etched graphic that represents Earth and Mars, connected to the star that gives light to both. While the simple illustration is reminiscent of the rover that connects the two worlds, it also recognizes the elegant line art of the plaques on board the Pioneer spacecraft and the gold records of Voyager 1 and 2. The plate is in the middle of the rear cross member of the rover attached will be visible to cameras on the Perseverance mast.

The corona virus currently has no effect on the start plan of the Mars Perseverance Rover. The installation was one of the many activities recently performed by Perseverance’s assembly, test and launch operations team. On March 21, the team began reconfiguring the rover so that it could ride the Atlas V rocket. The steps included stowing the robot arm, lowering and locking the remote sensing mast and high gain antenna, and pulling back the legs and wheels.

The Perseverance Rover is a robot scientist weighing just under 1,043 kilograms. It will look for signs of past microbial life, characterize Mars’ climate and geology, collect samples for future return to Earth, and pave the way for human exploration of the Red Planet.

JPL, a division of Caltech in Pasadena, is building and will manage the operation of the Mars Perseverance Rover for NASA. The agency’s Launch Services program, located at the agency’s Kennedy Space Center in Florida, is responsible for launch management. The Mars 2020 project, with its Perseverance rover, is part of a larger program that includes missions to the moon to prepare for human exploration of the Red Planet. NASA is slated to return astronauts to the moon by 2024 and to build a sustained human presence on and around the moon by 2028 through NASA’s Artemis moon exploration plans.

For more information on the mission, please visit:

The black hole seems to break the laws of physics, but it is an optical illusion