Breaking News
Home / Sports / 2019 NCAA Tournament: Virginia Can Beat a 16 seed After All

2019 NCAA Tournament: Virginia Can Beat a 16 seed After All 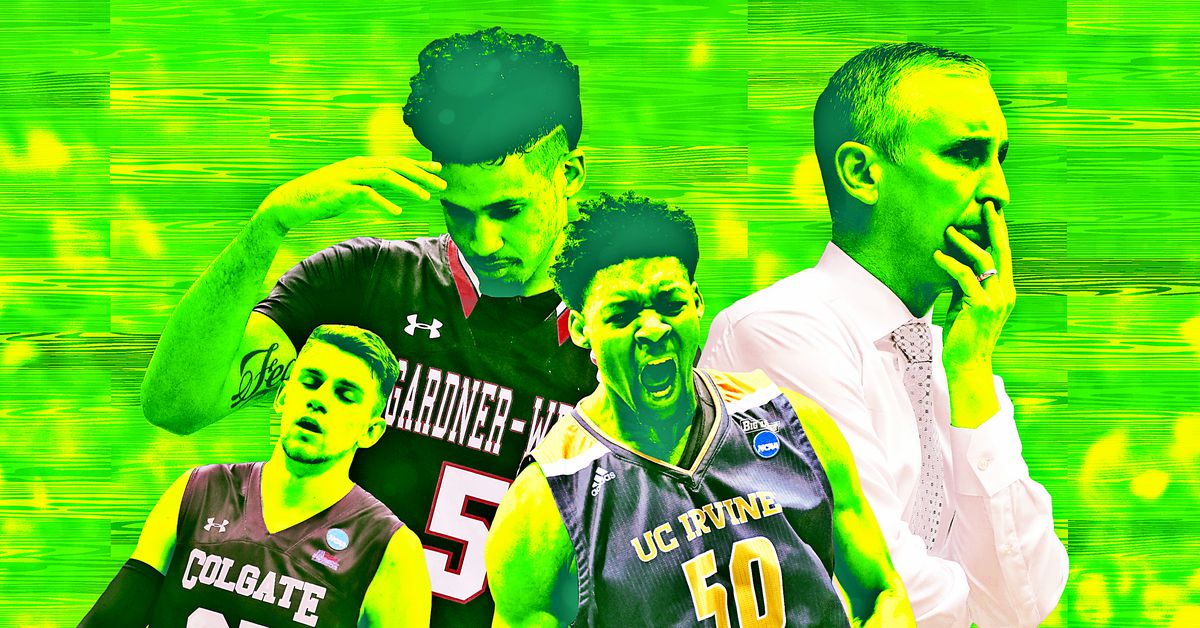 Who shines the most on the second day of March Madness? Winner: Entomophagy

The second day of March Madness brought a Cinderella worth celebrating: the UC Irvine Anteaters. The 13-seeded 'Eaters trailed to Kansas State in the first half, but when anteaters sticks its 2-foot-long eel-like tongue into an enormous pile of dirt and does not find any ants, do you think it gives up? No. It can not quit because, like, it needs to eat ants. That's sorta the gist of anteating. The Anteaters kept shoving that proboscis down the ant mound and emerged with a 70-64 win. Here's everything you need to know about UCI's big victory:

Normally, we'll celebrate this fun win and move on with our lives , But things set nicely for the Anteaters, since 5-seed Wisconsin lost to Oregon in their region. It'd barely be upset with the 13-seeded Anteaters beat the 12-seeded Ducks next round. (Honestly, I think an anteater could beat a duck in a fight.) Win that game, and UC-Irvine wants to be in the sweet 16. There's plenty of tasty insects left in this massive mound of March on.

Loser: Cheering on Your Friends

Kansas State has slipped up by the Eaters' endless tongues. Barry Brown, Jr., who is in a hurry to pass the time.

At first, I thought this was just a horrific pass, but after rewatching the play, I think what happened is sadder. I think Brown brought the ball across the halfcourt, saw an uncovered white jersey in the corner, and passed. Unfortunately, he was passing on a teammate on the sidelines, and not a teammate on the court.

Brown's teammates thought they were helping by standing up and getting hooligan, but for a split second, they distracted him enough to ruin their team's season. There is a danger in being too supportive of your friends. And that's why I'm skipping your improv shows, Steve-I just do not want to be uncontrollable to ruin your big moment.

Buffalo got dumped in 2015. The Bulls were a pretty dismal program before 2014, when the school hired shaper Duke point guard Bobby Hurley as head coach. In his first year, the Bulls won the MAC East. In his second year, they won the MAC tournament to make the NCAA tournament for the very first time ever. And then Hurley left, ditching the world of mid-majors to becoming head coach of Arizona State.

Friday, Hurley's Sun Devils faced off against Buffalo. Buffalo good left for a bigger name school in a better conference with deeper pockets. And, sure enough, it was a mismatch-because the six-seeded Bulls walloped Hurley's 11-seeded Sun Devils, 91-74.

Since Hurley left Buffalo, the Bulls have only gotten better. Hurley's successor, Nate Oats, led Buffalo back to the tournament after Hurley left, and again last year. This year, Buffalo had its greatest season of all time, going 31-3, with wins over Syracuse and West Virginia. Oats's run-and-gun style Buffalo's fifth-highest scoring team in college hoops, as the Bulls average 84.9 points per game.

Some people get dumped and wallow. Buffalo got dumped and improved. Hurley probably hoped he could stunt on the bulls with his rich and hot new partner. (Seriously, ASU has a lot more money than Buffalo and it's definitely hotter in Tempe than in Buffalo.) Instead, Buffalo got to show exactly how well they've been doing since the breakup. It's quite possible Oats wants to be the same thing in the coming weeks as he's sure to be highly sought after on the coaching market. If that happens, let's hope he never matches up with the Bulls in future years-for his sake.

Fifteenth-seeded Colgate Tennessee today, leading the Volunteers with 11 minutes to go and staying in a few points until the final buzzer. But Raiders had their best player, Patriot League Player of the Year Rapolas Ivanauskas. Ivanauskas played in the first half played and played terribly, 0-for-4 from the field with two turnovers, before the rest of the game.

Ivanauskas had issues with his non-athletic glasses and looking miserable. But after the game, head coach Matt Langel revealed the full story. Colgate's Rapolas Ivanauskas has pink eye.

"He woke up this morning, and it just happened," coach Matt Langel says. "Your heart breaks for him."

Poor Ivanauskas tried to play through his pus-filled peepers, but had to call it a day. Leonard had a bout of conjunctivitis at the start of the 2014-15 season, missing most of the preseason and the first official game of the year.

You've gotta feel for Ivanauskas. 1966 percent from the field in his first three games, struggles he blamed on the pink eye. His entire body felt ready to go, but his entire game was still affected by a fluky vision issue. Colgate played well without him, but they have pulled off one of the upsets of the year.

My one suggestion: Next time a star player comes down with a pink eye, he should take part in a biological warfare and stay on the court with his highly contagious and highly gross ailment. Who's gonna try to post a guy with pink eye?

Some things are just too perfect to be true. Like your bracket-obviously, you pick the right one, from your bold-but-wise upset picks to a smart-but-underrated team. But nobody can ever pick a completely perfect bracket-it's just impossible. 1-seeds in the first half, then fell short. First up was 16-seed Gardner-Webb's upset seed against top-seed Virginia.

After the Cavaliers became the first-ever one-seed to loose to a 16-year loss to UMBC, you had to assume. Virginia is the most consistent, most mistake-free, dullest team in college basketball-course they'd smother their vastly inferior opponent. They were jumped out to a 28-14 lead on Virginia, who committed eight turnovers while Gardner-Webb drilled five 3s. Gardner-Webb crowds out in GWU's campus at Boiling Springs, North Carolina – The galloping chubby pups were feasting.

The world preemptively laughed. again one year later ? How could any team be so great all season and so piss-poor on the big stage? Could they just be in the past two years? Would Virginia be like, Tony Bennett, in the fact of the fact that he turned UVA into a basketball machine? HOW WHAT THIS HAPPENING?

Later came Dakota State, which briefly outshone Zion Williamson, as the Bison held a 20-10 lead against no.1 overall seed Duke. And Iona tried to outshoot UNC, hitting 10 first-half 3s and taking a 38-33 lead into halftime.

Unfortunately, none of these underdogs could hold on. All three no. 1 seeds ended up winning by double digits-Virginia and North Carolina by 15, Duke by 23. But there was a moment in the first half when all three massive underdogs seemed destined to make something incredible happen. The Runnin 'Bulldogs ran as fast as their pudgy bodies could take them; the Bison had a legitimate stampede; and Iona … I think Gaels are, like, Irish people? I can not think of any cute, evocative verbs for that one. Moving on.

Anyway. No, your bracket did not hold up, and neither did these upsets. But I still believe there's a world where all of your 16-seeds have their first-half brilliance.

Congratulations to the Cavaliers for beating a 16-seed.

Even the most college basketball illiterate person in your bracket knows about the 12-over-5 upset. Even if you know nothing about the teams, you can pick a 12-seed, and even though a 5-seed should be better than a 12-seed, you've got a great chance of it working out.

If you did that, you're in pretty good shape. Friday, both 12-seeds won-Oregon beat Wisconsin (by 18!) And Liberty beat Mississippi State-and-yesterday, Murray State beat Marquette (by 19!). The fourth 12-seed, New Mexico State, had auburn buff, but was doomed by missed free throws and an airballed buzzer-beater. All told, the 12-seeds beat the 5-seeds by a combined 42 points, averaging a 10.5-point win.

There's an explanation for this. One-seeds through 11-seeds are for the most part, teams that have gotten at-large bids from the selection committee-that is, teams that did not win their conference tournament, but were selected because of their résumé. These spots skew predominantly towards teams from major conferences. Starting with the 12-seeds, though, we're getting teams that won their conference championships, but otherwise they did not make the tournament, according to the committee. vastly underrates the teams from smaller league teams like Murray State, which was 16-2 in conference play, and is currently ranked higher in Ken Pomeroy's rankings than seven teams which received at -large bids. I have heard of how much they are doing and how they are doing well.

That's not only manifestations in the teams that are chosen for the tournament, but also where they're seeded. And in a way that punishes 5-seeds. Because the committee undervalues ​​small-league champions that deserve to be 9- or 10- or 11-seeds, 5-seeds are left to dry.

While Virginia flailed against its 16-seed opponent, Duke demonstrated the other-way a 1-16 game with the one seed just obliterating the 16 seed, blasting them to hell with hilarious flair. Here are three separate things Zion Williamson did:

Williamson is making a strong case for the best college basketball season of all time, which mainly has to do with his production, efficiency, and how much better he makes Duke. He went 12-for-16 with 25 points in at 85-62 Duke win. Zion is not about his efficiency, his impact, his prospects, or anything serious. It's about watching a preposterous athlete. Even against a 16 seed, that's fascinating.