49ers and Bengal's Reactions to Week 2 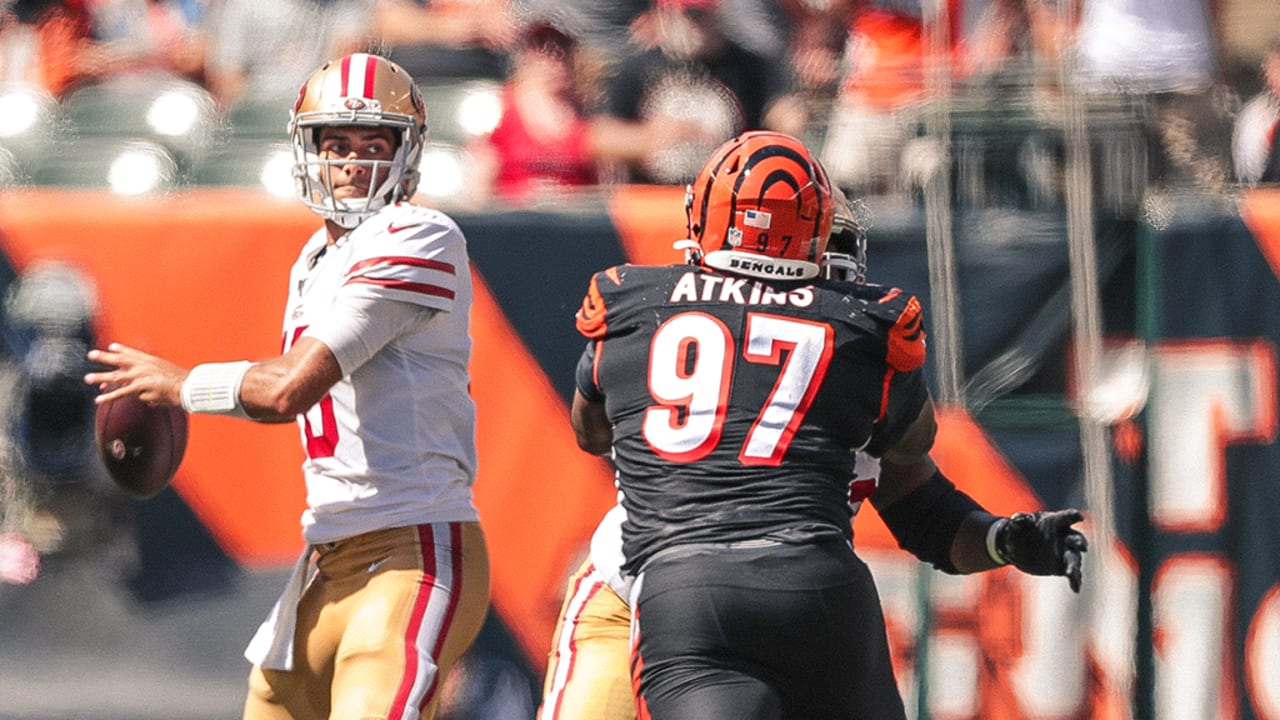 Kyle Shanahan on the first defensive drive of the day:

"I thought they got a lot of momentum back with our interception, I think it was on second-and -long. I thought their team came out playing well. I mean, I know that score with the big play to Marquise (Goodwin) early, but then they responded with that turnover. I thought our defense really got up because they got that momentum there, and our defense got them on a 10-yard loss – I forget how – but then they missed that field goal. So, it's a chance to change momentum. It's nice. "

Shanahan on feeling. We made a mistake and got scored in the second quarter and scored in the opening drive of the third quarter, so when you whack people like that, it's nice."

Shanahan on feeling the rhythm as a play-caller:

"Yes, the more you're out there ̵

1; it seemed like, for a while, we did not have to call it a third-down play – which means you're in first – or second-down, that's going well, and that's the goal. You want that stuff to play off each other. Shanahan on Jimmy Garoppolo's comfortability in Week 2.

"Yes definitely. Everyone knows the ability Jimmy has and he's shown – it's not just felt. A guy with talent – a guy who's played in games and shown everyone he can play at a high level – I'm sure he's going to get even if he makes mistakes, as long as he learns from them. I know it really helped him out today just having a run game. It really helps you get the pressure off of it, it takes you some clean looks. Jimmy did too. "

QB Jimmy Garoppolo on the Importance of Getting the Game Going Early:

" Yeah, the O-line got after you early , and they got after them often. It makes everything easier when they own the line of scrimmage like that. The pass game, the run game – everything – those guys dominated up front.

"It's tough. It's tough." Joe just goes over the news, especially with the situation we were in – he goes down and it sucks. Especially with a guy like Joe. We'll be in good spirits, but it's tough. "

" Yeah, it's awesome. It's like having a running back at the same time. It's very unique. I love him, and he's so raw and still has a long way to go. That's the exciting part. "

CB Richard Sherman on what he saw out of the 49ers open in Week 2:

" I guess they answered any questions you guys had. We knew what they were capable of. Some games you have those games. This is the NFL – there's talent on both sides. As you saw, Tampa (Bay) played a good game on Thursday night. They played great defense, and their D-line was pretty stout. We knew what our offense was capable of. We knew what Kyle (Shanahan) was capable of, in terms of his play-calling and creativity. We know what Jimmy is capable of, so we were not really concerned. It's a team game. If the defense does not have their best game, the offense has to step up. Some games you both step up, and you end up with a great result. "

Sherman on his impressions of Shanahan's offense:

" Yeah, I'm always impressed with it. But we also deal with it in training camp and OTAs, with everything he presents. He's one of the best offensive minds in football, so we hold him to a pretty high standard, and he lives up to it. He's a guy that's going to give defenses trouble, and he did that again today. "

" I was saying all this week that this is the first game we'll all be together since last year. We had some guys silently knocking off some rust.

Breida on the running back rotation:

"It's going great. That was the plan all year. All of us are great running backs and all are starters. "