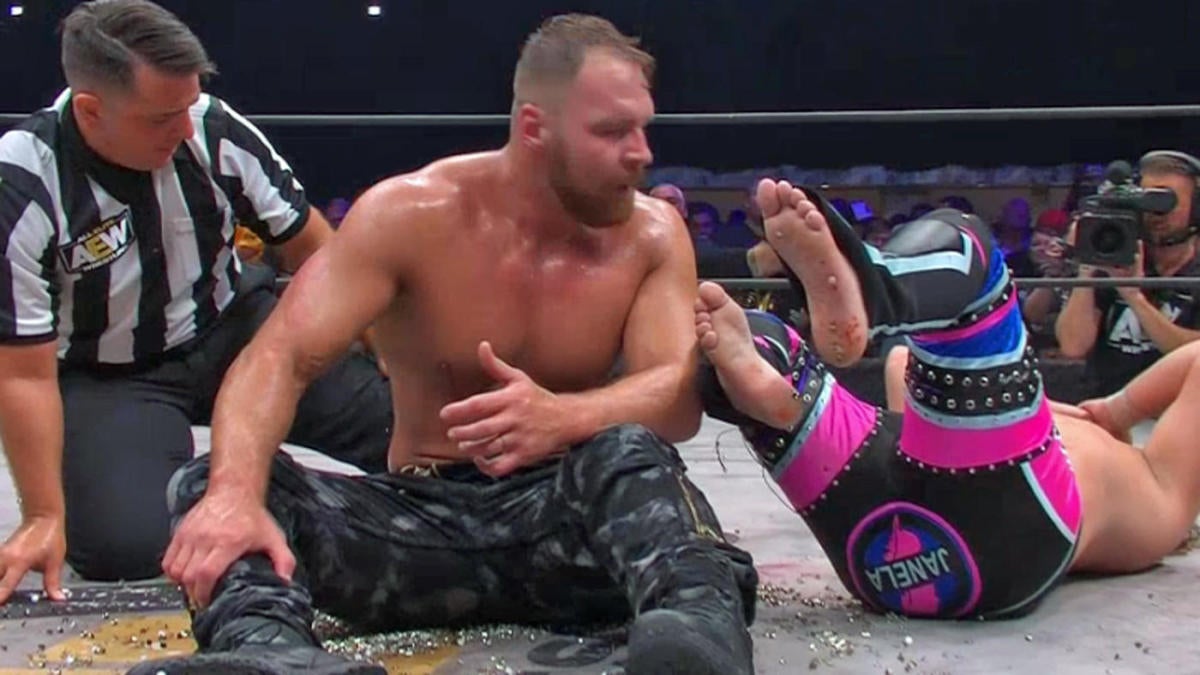 While not comparable to All Elite Wrestling's first offering, Double or Nothing, the Fyter Fest in Daytona Beach, Florida should never be a big show on Saturday night. Nonetheless, it provided a series of entertaining moments and continued the storyline as it approached both the July battle and All Out – its next big event – in late August.

There was another big bloodstain involving Cody, a massive six-man tag team match with The Elite, and a brutal unauthorized match to end the game between Jon Moxley and Joey Janela , After the match, Kenny Omega attacked Moxley in retaliation for what Moxley had done at the end of Double or Nothing Omega and Chris Jericho.

So what happened on Saturday night in Daytona Beach? CBS Sports accompanied you in updating this story with the latest results of the show. Read it below.

Subscribe to the podcast "State of Combat" with Brian Campbell every Wednesday as we break down the world of professional wrestling with longer episodes.

AEW Fyter Fest Results, Sheet Music [19659006] Best Friends def. Private Party (via Pinfall) and SCU (The Buy In): The winners of this game receive a shot at All Out for a first round of the Tag Team Championship Tournament. A beautiful shooting star press by Marq Quen from Private Party experienced the first fall and drew a light song from the crowd. He later freaked out of an attempted German suplex from the top rope and assisted in a huricanrana cutter for another close count. After Quen had dropped out of the ring after a failed dive and the SCU was eliminated, the Best Friends took advantage of Isiah Kassidy and hit Strong Zero for the 1-2-3. Perfect opening game for the show with non-stop action and a few highlights. The Dark Order appeared on the big screen after the match to challenge the best of friends. Suddenly the lights went out and the group surrounded the ring area; then the lights went out and they were all gone. The action after the game was unnecessary at the moment and really cooled things in the arena. Grade: C +

Failures of the Fyter Fest: The memento act of the Fyter Fest continued in the series and The Young Bucks complained about lodgings while on the Stage-standing bikini models were replaced by plastic dolls. Later, behind the stage, Omega was shown with wires and a piece for drums, only to find that it was not needed. The plot was not played through in the remainder of the show because it was completely forgotten on the main card.

Allie def. Leva Bates on Pinfall (The Buy In): The play with two librarians continued as Bates and Peter Avalon cheered each other and the crowd as they reached the ring. Avalon tried to help Bates with each match, but proved more distracting, even as he later threw a book into the ring as a foreign object. Allie caught it instead and threw it to Bates, who was caught with a super kick and pinned. It was good for Allie to win a win over her match with Brandi Rhodes next month, but this was for no other purpose. Condition: D

Michael Nakazawa def. Alex Jebailey on Pinfall in a Hardcore Match (The Buy In): The action in this one was weak because most of the participants are a comedy act and an amateur (that's nice). Jebailey was punished for putting a Nakazawa spear from the apron on a table on the ring and a kendo stick on the back. Nakazawa turned a dangerous and maimed German suplex on its head, but luckily it was fine. Jebailey then threw some LEGO-like buttons on the screen and the back of the body dropped Nakazawa on them, but only got two points from a cradle; Nakazawa returned to earn the victory. Let us then continue with our lives. Grade: D-

CIMA def. Christopher Daniels on Pinfall: After some nice floats, including some time outside the ring, CIMA hit Daniels to victory with a hanging backbreaker, a top rope power bomb, and a Meteora. It was a fine opening game, but nothing spectacular, and the Fourway would probably have been a better choice. Grade: C

Riho def. Nyla Rose (via pinfall) and Yuka Sakazaki: Rose played against two smaller rivals right to their size. Yuka hit a 619 on Rose and kicked twice from the top rope, but did not even get a two count. Rose finally caught Yuka for a side slam, but her nonchalant cover only resulted in a two count. Then she hung Riho over the top rope and for the moment of the night sank a sick flying knee lash from the top rope, but did not even try to pin it down. Yuka distracted Rose so much that she missed a Senton from the top rope. Riho and Yuka both climbed the top rope to meet Rose, but she caught both competitors, who pulled her down and counted 2.7 in a double Pinfall attempt. Finally, Riho Rose rolled up with an interesting cradle to get the surprise victory. Rose attacked Riho after the match, but Yuka rescued her. This match started slowly and hard, but all three participants were entertaining for the past five minutes. Difficulty: C +

Hangman Page Vs. the present fans "nerds". As MJF and Page went head to head, MJF went to Pages injured left knee and was about to mock Bret Hart with a sniper when Page stopped him and put on the same car. MJF hit a heat on Page, but Jungle Boy canceled the count. Page tried to hit a Buckshot lariat for MJF but hit Havoc when MJF moved out of the way; He then followed with Dead Eye on Havoc for the win. An entertaining match that consistently narrated a solid story and wrote over Page – and continued its feud with MJF – while in two months we're still waiting for its AEW World Championship match with Chris Jericho. Difficulty: B

Cody versus Darby Allin ended in a draw (20 minutes): This was a fun pairing as Allin's fast, athletic style intensified the otherwise slow excitement and pushed match. Cody fought aggressively throughout the fight, largely dominating the action until Allin hit a springboard tornado and a spherical jump through the ropes, which Cody quickly countered. Allin nailing Cody with a code Red and Cody responding with an inverted Superplex. After Allin bit into Cody's hand, he tried to drop an elbow on the ring apron. Cody bypassed it by rolling into the ring, and Allin landed flat on his back with a brutal result. Back in the ring, Cody packed Allin into a body bag that Allin had actually brought to the ring. He hit him with a disaster kick in his pocket and unpacked it for the pinfall attempt in an unnecessary spot that really slowed down an interesting finish. At that point, as time went on, Cody took off his weight belt and beat Allin with it. Then Cody hit a Cross Rhodes on Allin, but time ran out when the referee counted three.

When the crowd asked AEW to restart the match, Sean Spears ran into the ring, hitting Cody with an unprotected stool shot on the dome opening a cut on the back of Cody's head (over blade job); Cody, who did not raise his hands, was ridiculous in 2019. MJF immediately ran to the ring and the SCU followed him as Cody's head was completely covered in blood. Cody sold the chair shot as potentially affected when Dean Malenko and Brandi Rhodes helped him back. Most of the games were average at best, but the finish was solid and the angle after the game added tension. Grade: C +

Kenny Omega and the young bucks against the Lucha brothers and Laredo Kid: The bucks came out as Ken and Ryu, and Omega dived as on Akuma – everything from "Street Fighter"; Ring announcer Justin Roberts played the theme by announcing "Round 1 … Fight!" to start the game. The match started with a hot double superkick by the Lucha team in a Huricanrana. Matt Jackson hit three Northern Lights suplexes (including a double) that shook the crowd. Laredo Kid hit a fantastic top suicide, which popped through the legs of Penta El Zero M, who harnessed the ropes. Omega hit a trio of Snapper Duplexes to slow the Lucha team, but they quickly took advantage of it when Penta literally threw his brother Ray Fenix ​​over the ring post in Nick Jackson. All six competitors exchanged Superkicks before the Luchas hit a trio of them, and then The Elite countered with three Hadoukens (a street-fighter tactless move) and three power bombs.

Fenix ​​hit a cutter on Omega before he could hit a top con Hilo, and Nick hit a reverse cutter on Fenix ​​to equalize the sides. Matt then picked up Penta outside the ring for a Meltzer rider, but Fenix ​​stopped Nick's attempted jump by hitting a spanish fly from the top rope on the duo. Back in the ring, Omega hit a Tiger Driver 98 on Laredo Kid, but only got a count of 2.8; He followed with a V-trigger and a single-winged angel for the 1-2-3. This match was pure action, but I would be lying if I did not admit that the Hadoukens had taken me out of the "athletic" part of the contest for a moment, what AEW was supposed to be about, even though the elite played a unique audience at this moment. Pure fun from start to finish. Difficulty: A-

Jon Moxley vs. Joey Janela in an Unauthorized Match: AEW has marked the end of the current Fyter Fest Show by turning off the lights and then turning the light back on to start this match , The first big spot came when Moxley avoided a Janent Senton, causing Jalena to sit on a chair. Moxley then introduced a barbed wire chair, which he stomped on Janela as the crowd sang "you sick child" and made Moxley bow. Janela then slapped a Huricanrana on Moxley and sent him to the chair before slapping him on the back. Next, a Russian leg swung from the apron to a chair outside; Moxley drove with Janela's back first to another table in the corner. A barbed wire board was placed in another corner when two tables were placed side by side on the ring. Moxley was thrown into the former, and Janela soon put a ladder in the ring and climbed on it to propel an elbow in Moxley through the tables.

Janela put another barbed wire board between the apron and the barricade, but tried to make sure that the fans were not injured, Janela lost his advantage. Moxley woke to pick up Janela and hit a Death Valley bomb over the top rope and into the board. Moxley then poured tacks into the ring and immediately removed Janela's boots and socks and released his bare feet. Moxley slapped Janela on the nails with a release suplex, but Janela asked for more and shook hands with Moxley; he forced himself by throwing a second set of thumbtacks into the ring and making paradigm shifts for victory. This was a solid hardcore / unanctioned match with some great spots the fans loved, but basically there was no wrestling and very little in the way of psychology. Difficulty: B-

After the match, a furious Omega hit the ring and punched Moxley with a V-trigger. Then he put Moxley between two pieces of table and stomped from the top rope on the outside of the ring. The two fought near the set and Omega drilled Moxley over the back with an electric guitar before leaving. Omega seemed to have left, but came back quickly with a trash can. he slapped Moxley into his can with his own paradigm shift before standing on the set to ovation from the crowd as Moxley smiled and cackled to the floor.