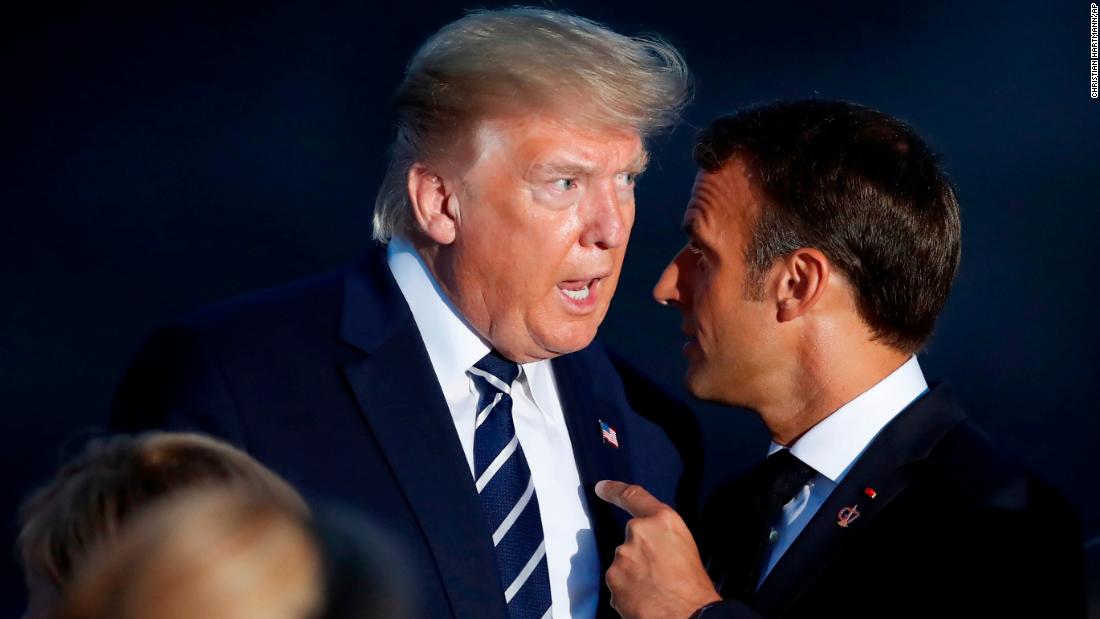 He said he had received news from China that the negotiators were ready to return to the trade talks, even after his advisors insisted on Sunday that Trump wanted higher tariffs on Chinese products. And he shrugged a surprise visit from the Iranian Foreign Minister the day before and said that he knew this was happening and did not interpret it as a sign of disrespect.

"It was really good, it's not over yet, but I'll tell you that we had a great unity," he said before a meeting with German Chancellor Angela Merkel.

But even in this session differences were obvious. Merkel said it was still "a long way" until a solution was found for Iran. And she said she would be "very happy" if the US and China could end their bitter trade war.

Trump seemed to suspect there was a better chance that this would happen overnight after the phone calls. He also appeared to refer to statements made by the Chinese Vice Premier, who said China would "take a calm stance in trade negotiations."

"One of the reasons why China is a great country is that they understand how life works," Trump told reporters during a morning meeting with Egyptian President Abdel Fattah el-Sisi. His trading team received calls from Beijing expressing a desire to resume talks. "I have great respect for this, it is a very positive development for the world."

It was a hopeful moment in otherwise fierce trade discussions at the G7, where Trump was a man who insisted that tariffs could be produced as a truce rather than shaking the world economy.

Already next month, US and Chinese negotiators should meet again, so that announced on Monday development of Trump itself meant no breakthrough. But any indication that the two sides are still working to reach an agreement is a welcome development for other G7 leaders who blame the protracted trade war for slowing growth.

Apart from the signs of optimism, there was little evidence that Trump prepared reconciliation acts that could help the group of leaders to send out a sign of unity on the final day of the negotiation. Instead, disputes over trade, foreign policy, and climate change were evident, though Trump claimed the summit was without discord.

He will end the day with a joint press conference with his host, French President Emmanuel Macron. I have sought to advance issues in which his disagreements with Trump are evident. This included a surprise appearance by the Iranian Foreign Minister, whose arrival in Biarritz surprised some US officials on Saturday. Macron told his leadership colleagues that Mohammad Javad Zarif would not hold the visit until the night before his arrival.

Trump kept a neutral view of the situation on Monday and said he was not surprised and even gave Macron his consent to continue "Macron spoke to me, he asked me," Trump said. "I said if you want to do that, that's fine, I do not think that's disrespectful at all, especially when he asked for my consent."

Nevertheless, Trump said it was too early for a meeting with Zarif. And he has further ruined the Iranian nuclear deal, an agreement that European leaders are working to save after Trump has withdrawn. Another topic was climate change, the focus of a lunch session on Monday.

Trump was not present at the beginning of the session, his chair was empty, while other leaders started the talks. Prior to the G7, US officials said the president considered meetings on climate change and the oceans as less time-consuming and instead focused on the economy.

In the last two G7 states, Trump has nullified the attempts of his counterparts to present a demonstration of unity on this issue.

Trump's adjutants have angered that the summit's agenda is an attempt to politically strengthen Macron while isolating the United States. Whatever the intent, the effect was to separate Trump from other leaders in a moment of global concern.

Nowhere was this as obvious as in trade, a subject that has filled Trump with new confusion on Sunday. After his beloved tariffs seemed relaxed, as he told reporters that he had "second thoughts" about the punitive trade war, his adjutants came in to explain that he was only expressing concern that he would not apply any stricter duties.

The attempts to clean up were not welcomed by other leaders who were cautiously encouraged to meet with Trump, perhaps rethinking his approach to global trade. Instead, Trump has argued in meetings and dinners that they should apply tariffs on China with him to force Beijing to change some of its economic practices.

Inter-Summit interactions taking place in the midst of the crowd of French holidaymakers finishing their summer vacations On the picturesque Basque coast, tensions have arisen, according to officials from several countries. Trump has denounced his counterparts on Iranian issues for trade with Russia, which he fiercely advocated during a dinner on Saturday night for the resumption of next year's summit.

There were some friendly moments. Trump greeted Merkel with a French double kiss on the cheek, when they met on Sunday in a family photo. And Trump zealously announced a "fundamental agreement" on trade with Japanese Prime Minister Shinzo Abe, even though the final details were still on paper. Even the leader closest to Trump, British Prime Minister Boris Johnson, admitted he had spoken out against Trump's trade war with China on Sunday.

However, the president has insisted that the summit be happy – either blind to obvious disagreements or ready to ignore them.

"In France, we all laugh at how inaccurate the US coverage of events and conversations is on the G-7," he wrote on Sunday night on Twitter after sending birthday greetings to actor Sean Connery and the retired television presenter Regis Philbin.

He also seems to be looking forward to the summit next year when it's his turn to be host. He told reporters it would probably happen at his Doral Golf Resort near Miami airport.