Alabama's defense responded violently to the conversation in Louisville 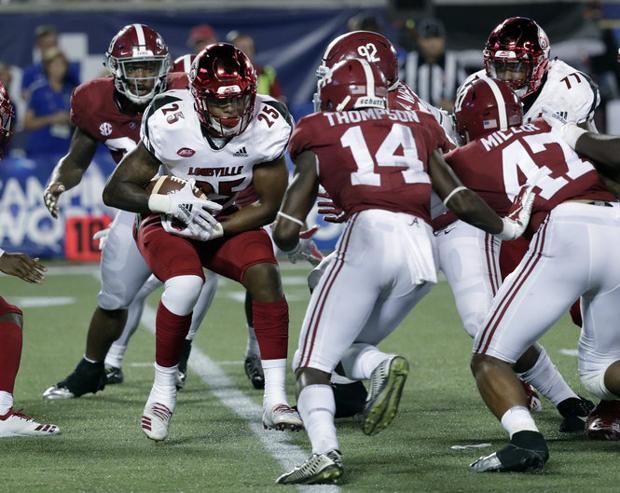 The few weeks of chattering by Cardinal Offensive Linemen and a receiver about the possible mastery of the Crimson Tide's rebuilt defense, it was pointed out, was exaggerated.

Top ranked Alabama's 51-14 Louisville hammers will be remembered for the magic of Tua Tagovailoa, though his defense had his say. Sometimes violent.

Louisville played his first game without Heisman winner Lamar Jackson, scoring only 16 yards and 268 goals. The first starter, the Jawon Pass, had 20 of 39 passes for 252 yards and two points. There just was not the consistency, thanks in part to the Cardinals going 4-for-14 on the third downs.

When it was still close, he had the cardinals marching relative to the Alabama 30, before Deion Thompson got a pass in the end zone. Shyheim Carter then took one more in the fourth quarter and returned it 45 yards for the Tide's first defensive result.

It was not perfect and Nick Saban will have many teaching moments in the second half.

"We basically just gave them a touchdown," Saban said.

Nick Saban walked away on the sideline when Christian Miller was tagged for an unsportsmanlike gambling flag, which kept the Louisville drive alive for the 12-yard touchdown pass to tight-end Kemari Averett.

This was followed by a pattern that Louisville coach Bobby Petrino does not accord with the taste for throwing receivers. The first two passes of the game went to tight end Mickey Crum. Averett, with four catches, was the leading receiver.

But in August, it was cardinal recipient Dez Fitzpatrick who said that Louisville's recipient "1,000 percent" had a talent advantage on the Alabama secondary. Fitzpatrick caught three passes for 30 yards Saturday night.

"You know they're recipients," Saban said, "they talked about how they should be pretty good, so I was really kind of satisfied with the way we covered them."

Then, last week, Louisville offensive lineman Mekhi Becton said the cardinal front would "shock a lot of people." His neighbor Lukayus McNeil said Louisville was "not worried" about Alabama's front.

The Cardinals completed the third quarter with four yards on 22 attempts Alabama issued 11 tackles for the loss.

Quinnen Williams ran the charge, the Birmingham product made its first start at Buggeil and made six stops, 3.5 of which came in the backfield and also led a pass in the backfield Mab Wilson also had 1.5 stops behind the line with four players combining for Alabama's three sacks.

Saivion Smith tied Williams' team-high six tackles and nearly had picked up a concussion hunt on the ball from Thompson.

The 111 penalty boxes on 10 flags – largely rated for defense – will not sit well despite the score. There were undisciplined moments and drive extenders that are as good as sales.

But after the rant from Louisville, it looked like a happy evening for an Alabama defense that played with an edge in Orlando on Saturday night.

Bengals need a “ridiculous move” from Dolphins for No. 1