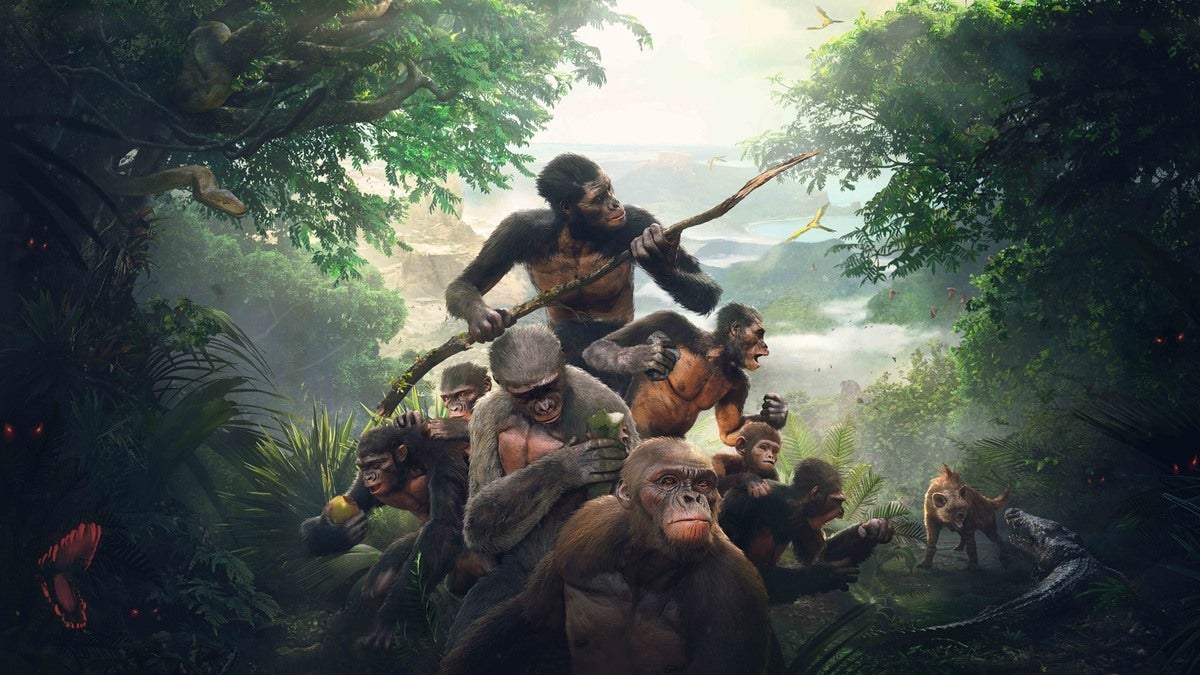 When our ancestors of the distant apes came together some 10 million years ago and decided that they should become human, did they have a manual that told them which two things to bring together to get there? No! They had to put just about everything that had happened to them in their mouths to find out what was tasty and what was deadly poisonous. There was a lot of hard work, repetition and death, which turned out to be completely unnecessary in retrospect. Ancestors: The humanity's odyssey is doing its best to restore much of this crazy blindness and futility and the associated sense of discovery in a beautiful prehistoric world, making it an apt metaphor.

Ancestors are proud to withhold information about how the key systems work or what they should do, beyond the general goal of developing a group of chimpanzee-like common ancestors into modern humans faster than they actually did. "We will not help you much," says the introduction. As a result, the opening hours are somewhat mystified, as both you and your primate tribe are trying to figure out the world around you at the same time. However, once you have demystified the basics of how systems such as skills and fights progress, start with a long, lengthy and repetitive slog of sentience. If someone had just explained the basics to me, maybe I would have better appreciated the majesty of nature around me.

To be at the forefront, I have not reached the end of yet – which, I suppose, means becoming human. However, I spent about 40 hours starting and restarting the journey. Every time I have at least one important "Why did not you just tell me that?" – learned information that I could come up with next time. Somehow, the many tips on the pause screen and in the help section of the menu avoid becoming specific enough to be useful. For example, I still do not fully understand how the indicator works in the lower right corner of the screen, though I have some theories.

If I know what I know now, I could in a fraction of return to where I am the time. "

I am sure that if I know what I know now, I can return to where I am in a fraction of the time, and I can write here in a few sentences – but that would ruin the fun of anyone going to explore it. Instead, I'd just like to point out one of my biggest annoyances: it's absurd for a monkey I controlled to develop a tolerance to eating eggs that will forget when it ages and needs to re-learn. That's weird.

In my most successful run, I covered about half of the 10 million years between the start and end points (which does not appear to have a 1: 1 relationship with the time played) and saw a few things. My main complaint is that many of these things have looked new, but otherwise they were exactly the same as the things I've seen before, and do not give me the assurance that what's coming next will be significantly different.

First of all, it is fascinating to control a small group of great apes with common ancestors in a prehistoric African jungle. Animations are a highlight and the way they move and interact feels lifelike and authentic. I've found that when one of these animals is in distress or dies, than with a typical human character, it's more of a gut punch. They each have their own monosyllabic names like Kwu, Na and Mo … but otherwise they are disappointingly interchangeable and almost completely available. That's probably best because the AI ​​of those who do not control you is pretty bad at keeping them alive. Apart from that, these are effectively your lab rats and you definitely should not get stuck. I ended some early lineages by failing to prioritize the next generation before the current one. And because you can not go back to a previous memory state, the loss of your last monkey is really the end of the series.

The way monkeys move and interact seems natural and authentic. "

It is meanwhile Early Explorations and Experiments, in which Ancestor's" mocking "find it self-out humor seems somewhat inappropriate. You have to keep in mind that access to the Internet is a prerequisite for playing, as there is currently no physical copy available (it will not be available on the consoles until December). Since Minecraft has trained a generation to do that, I have no doubt that if the vast majority of people come in contact with a basalt stone, for example, they will first run Google and find out everything that they can. If you want to surprise people these days, you have to do a procedural generation of which, as far as I can judge, Ancestors does almost nothing. But as I play before the launch, I've learned that developer Panache seems to hope that all will do this: exploration and trial and error, literally crush stones to see what happens. It is associated with a lot of frustration.

Some things are much easier than you would expect. For example, only the parents and children of a certain monkey are hereditary and nothing more than that – so the story is completely lost over just a few generations. And there is no real individuality or complexity in breeding, because every evolutionary progress you make is collective. The only thing about individuality is that babies are born with spontaneous mutations that give them special abilities. However, they only become available when you trigger a generational change, and they grow up – and then they are accepted by all persons (even if the mutant monkey has not survived even had children).

The way you develop your lineage is a fairly normal ability tree that disguises as a neuronal connection in a brain using "neural energy" (also known as XP) Way to represent it. But there is a catch: every time you decide to advance a generation or make a much larger development leap that effectively backslash your game but maintains its development, you get a set number of lock-ins (depending on factors, which do not apply). Everything that is not locked is lost and must be unlocked with newly acquired experience. It's an effort that slows down progress, especially if you waste a lot of time figuring out how it works and how it can be optimized.

Crossing a rushing river or a steep cliff requires some effort, and everything feels well thought out. "

So there is no attachment to a particular monkey or lineage, but the surprisingly large world (for which there is no actual map in play, but only landmarks from which to navigate), the researching is interesting for me. The lush jungle in which you start is pretty pretty, thanks to a variety of plant and animal species to discover, and many rivers, waterfalls and caves that can be tripped over. It is more so that it was clearly created by hand to make reaching point A to point B a mystery, and the routes between the recognizable landmark areas are rarely a straight line. Getting over a rushing river or a steep cliff takes some effort and everything feels well thought out. Discovering Points of Interest is one of the best ways to gain experience. To do this, you need to get your monkeys to move outside their comfort zones and face the fear of the unknown (another weird process that needs early explanation)), so there's a big incentive to get moving stay.

This whole African habitat is heavily populated by predators, but once you understand how Dodge and Repel works, it quickly becomes clear that the many jungle cats, snakes, crocodiles, huge birds, and more are trying to eat you , are virtually all the same, and no one is a threat. Do not get me wrong – there were still moments when I was surprised and they frightened me, but it's almost a shock. I'm not going to tell you how the fight works because you might want to find out for yourself, but I'll tell you that if you find out that fighting a hippopotamus or a buffalo is going to kill you mechanically, you'll probably be disappointed Wild boar is identical.

Before you figure out how easy it is to make a stick to defend yourself, it's often wise to stay out of the way as predators are almost entirely on the forest floor (even snakes, as you think would be decent climbers). Swinging from tree to tree is a thrill, except that doing so from a third person's point of view and flying through leaves means that you can not really see what's coming. If the branches go out unexpectedly, you will go down in history as the inventor of the concept of the face plant. Part of it is never really knowing how far you can fall without hurting or killing your monkey (it's quite a long shot), but once you've figured out the confusing three-layer endurance system, you can climb and swim a lot pretty much overcome obstacle.

It is important that it is not a matter of accumulating large heaps of resources for production in walls, tables and chairs. "

Ancestors is a survival game in the sense that you have to eat and drink on a regular basis and sleep to maintain your stamina and not die, but there is rarely a lack of food or water or places where you can take a nap. The important thing is not to collect large amounts of resources for the production in walls, tables and chairs. You do not have real inventory outside of your own two hands (which are managed independently and a bit cumbersome), so this is not really an option. Instead, I usually wore an old-fashioned tool that allowed me to sharpen sticks quickly into sharper sticks that could be graphically slid into the eye socket of any jungle cat or boar or alarmingly large python my own business and inventing the slug. It gets a bit more advanced, but not much.

The goal of all this is evolution, which (unlike what Pokemon may have taught you) requires many generations of gradual change. This means that many babies have to be born, but the tragic act of procreation at Ancestors is deeply unsexy. Courting is not only a matter of very mechanically locating a suitable partner for the monkey you are currently controlling, and pressing B to nurture it for 20 seconds, but you then call it with a shriek and a thud Ground and mating bed then they are forced to watch a complete one-minute cutscene for each birth.

Well, I'm a dad and I'm the first to admit that this is deeply rooted in almost every proud parenting parents are desiring to force everyone around them to get an assembly watch videos of her first year with her newborn. It's a disease – we all know it and we do it anyway. In Ancestors, I overdosed on my own medicine: they are forced to see exactly the same minute-long, non-skippable cutscene every time a new baby is born. And babies are one thing you have to have a lot of – the more successful your clan is, the more babies it will give birth, and my best strategy yet is to do nothing else until every monkey woman has had a maximum of two children. With your starting trunk you can expect to see this four times per generation, and it just goes up from there. The cutscene is literally long enough to get up and make me drink. That is, unless I'm doing something wrong, which I could be because Ancestors "does not help you much".