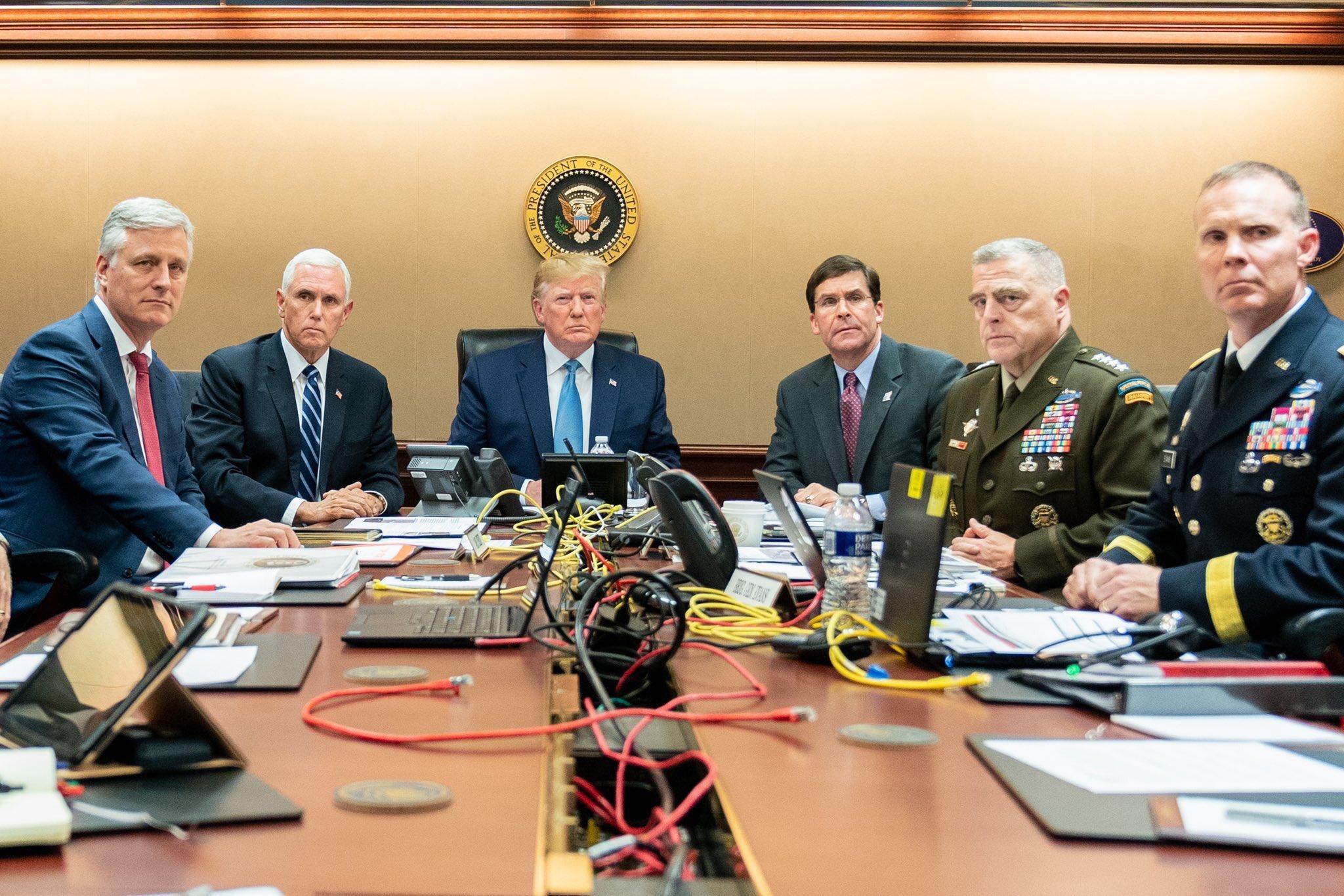 In 2011, 10 years after the terrorist attacks in New York that destroyed the twin towers of the World Trade Center, the kidnapping architect, Osama bin Laden, was killed by US special forces in a raid in Pakistan.

] The US Navy Seals that carried out the raid broadcast live footage to the White House, and a photo of President Barack Obama along with his national security team, which witnessed the operation, was featured on the front pages of Newspaper used throughout the world.

At the time, numerous conspiracy theories emerged, including that the photograph was a fake, that bin Laden had not been killed, or that he had been killed a few years earlier and his body had been frozen and held by the United States. [1

The death of Isis leader Abu Bakr al-Baghdadi, who blew himself up during a raid by US special forces in Syria, has seen the release of The White House shows a photo of Donald Trump, who is witnessing the live operation.

And this has also triggered online allegations of falsification.

But this time, one of the prominent skeptics is the photographer who shot the famous Obama image "Situation Room" himself – Pete Souza.

There are remarkable observations on the photo published by the White House.

Mr. Trump is sitting at the head of the table in the middle of the photo, surrounded by his team, wearing smart suits and ties and looking mainly towards the camera. On the table is a mass of Ethernet cables, many of which seem to be connected to nothing.

The picture is in stark contrast to the photo from 2011, where Mr. Obama is not at the center of the big picture, where the less formally dressed national security team appears tense and focuses on watching what is on an invisible screen plays outside the shot.

The differences have led many critics to accuse Mr. Trump of staging the photo instead of viewing it as a true account of the situation at the time of the robbery.

But is it really staged?

In a tweet that has since been praised more than 50,000 times and retweeted in less than 24 hours, the former White House photographer Mr. Souza wrote, "The raid was reportedly held at 3:30 pm Washington time , The photo shown in the IPTC data of the camera was taken at "17:05:24".

He also retweeted a CNN commentator, David Axelrod, who posted both the 2011 and 2019 images and wrote: "Which these pictures looks real and which looks set?

Later, Mr Souza tweeted, "To be clear, I did not say it was staged, and Trump himself said he did not get to the Situation Room until 5 pm so it's definitely possible that

According to the Associated Press [1965-9026]the attack took place after midnight (local time), which equals 6 pm in Washington DC – matching the time of the photo.

Commentators have also suggested that three people in the photo, including Mr. Trump, wear exactly the same suit and tie combinations as two days ago, leading to speculation that the photo may have been taken two days before the raid This is totally unproven.

In an unusual press conference after the raid, Mr. Trump described at length the death of the Isis leader, whom he said had a suicide vest ignited after he had fled into a tunnel. while being hunted by US military dogs. The explosion apparently killed him and three of his children.

Despite Mr. Trump's strong allegation of the death of the leader of a movement he had repeatedly declared defeated, the Pentagon reported the raid on al-Baghdadi's residence had been "successful" despite Mr. Trump's actions, rather than because of them, The New York Times reports.
Source link