Backlash in China after the death of the front doctor 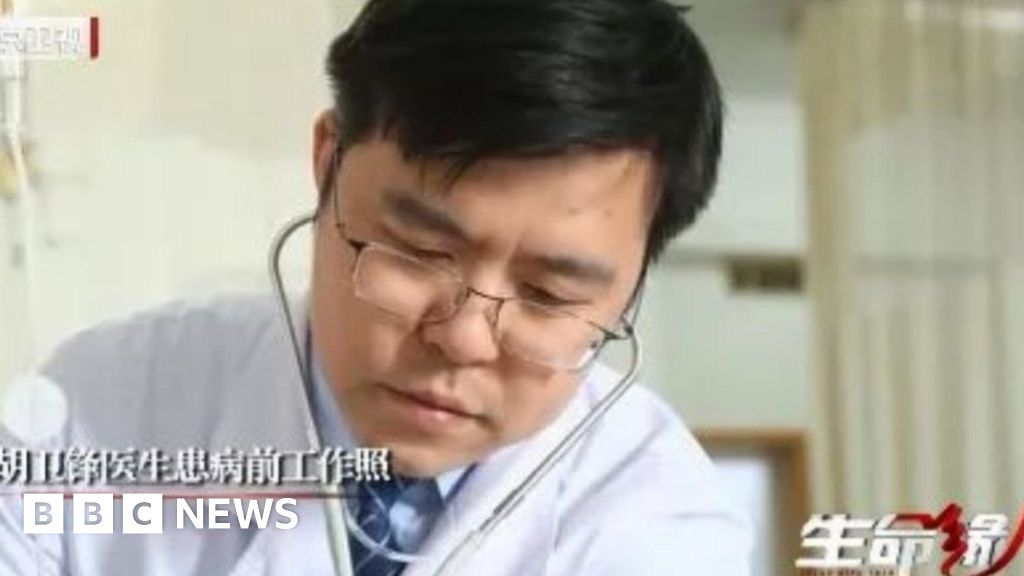 7; handling of the coronavirus pandemic.

Dr. Hu Weifeng died on June 2 after a four-month struggle with Covid-19.

He made headlines in March when his skin went black during his treatment “due to liver dysfunction”.

The exact cause of death has not been released, but the news has caused anger on Chinese social media sites.

Who was Hu Weifeng?

Dr. Hu Weifeng was a urologist who treated patients at Wuhan Central Hospital – where Covid-19 was originally identified.

He was tested positive for the virus in the early stages of the Chinese outbreak in January and taken to various hospitals for treatment in the following two months.

His condition initially improved in mid-March; However, at the end of April and May he suffered bleeding from the brain.

Dr. Hu Weifeng and a colleague, cardiologist Yi Fan, went viral in April after official media released their “hard fight against the virus”.

Users of the popular Sina Weibo microblog were amazed at the time when they found that the pigmentation on their faces had changed. Media said “could be due to abnormal liver function”.

The two became known as “the two black-faced Wuhan doctors” and received national praise for fighting the virus because they were both seriously ill.

The Communist Youth League called them “angels who fought death,” and Weibo users sympathized with how much they had to endure at the front.

Social media users said at the time that their skin was a physical “scar” to live with after fighting on China’s front.

According to China Daily, Dr. Yi was only released on May 6 while Dr. Hu apparently never recovered.

Worked in the same hospital as “Whistleblower”

Many newspapers, including the Global Times national newspaper, have found that Dr. Hu “worked in the same hospital as Li Wenliang.”

Dr. Li became known as China’s “whistleblower” doctor, who warned his colleagues about the virulence of the virus in late December.

His death sparked national outrage when it became clear that the authorities had tried to silence him by reprimanding him.

It is unclear whether the two knew each other because the two doctors worked in different departments. Wuhan Central Hospital is reported to have more than 4,200 hospital employees.

It is also unclear whether they could have infested each other with the virus – both Li Wenliang and Hu Weifeng were infected with the virus in mid-January, but according to the Global Times, 68 people tested positive for Covid-19 and more than 200 were found examines medical observation.

The reaction to Dr.’s death However, Hu Weifeng was similar to that of Dr. Li Wenliang: pure anger.

The cause of death was not published; However, Global Times says “his situation was serious and he became emotionally unstable”.

Tens of thousands of Sina Weibo users have used the hashtag #WuhanCentralHospitalDoctorHuWeifengPassesAway. While many candle emojis publish – a common practice to honor a deceased person’s respect – others ask how he died and demand that top officials be released from the hospital.

The anti-establishment newspaper Epoch Times, which is blocked in mainland China, says hospital executives have “strongly suppressed the early warnings.” [of Covid-19] to medical personnel and forced them to be exposed to large cases of the virus without protection “.

There are also many on Weibo that make hospital data transparent after Dr. Question Hu.

“Hadn’t the patients in Wuhan been evacuated a long time ago?” asks a Weibo user and receives more than 400 likes.

This has raised concerns that many patients may still be treated for health problems that are a direct result of Covid-19 but have since been tested negatively.

On April 27, the National Health Commission announced that Wuhan had released all of his coronavirus patients.

There were more than 50,000 confirmed cases of Covid-19 in Wuhan. And the Wuhan Central Hospital was one of the worst affected hospitals.

Xinhua official news agency says that “the number of deaths and infection rates were the highest of all Wuhan hospitals” during the China outbreak.