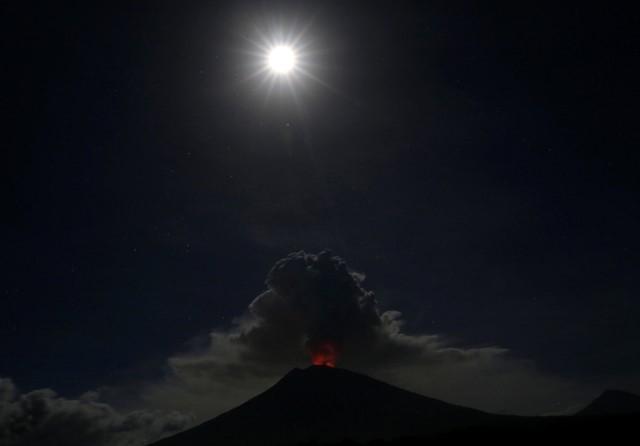 DENPASAR, Indonesia (Reuters) – The airport on Indonesia's holiday island of Bali was reopened on Friday after the ashes of a volcano had forced a brief closure and the cancellation of more than 300 flights.

Mount Agung in northeastern Bali has been rumbling temporarily since the end of last year and has again thrown up smoke and ashes on Thursday.

On Friday, he shot more than 2,500 meters of ash cloud into the sky and officials said operations at Indonesia's second-largest airport would be checked every few hours.

"We are watching the outbreak," said Israwadi, a spokesman for airport operator Angkasa Pura.

"The airport could be closed again if the eruption affects flight safety."

Agung towers over eastern Bali to just over 3,000 meters (9,800 feet). The last major outbreak in 1963 killed more than 1,000 people and destroyed several villages.

Sutopo Purwo Nugroho of the Civil Protection Department said that the activities were running deep under the volcano.

"Microtremors are still being discovered … suggesting that magma moves to the surface," Nugroho said in a statement.

At the beginning of December, operations at Bali airport were interrupted for more than a week. Thousands of visitors were stranded before the wind changed to blow away the smoke and calm the volcano.

Hundreds of villagers living near the volcano evacuated their homes on Thursday and moved into three evacuation centers.

Worried passengers crowded into Bali's airport, waiting for news of their flights.

Garuda Indonesia, Sriwijaya and Indonesia Air Asia said among the airlines serving the holiday island that they were working to help stranded passengers.

Virgin Australia, Qantas and Jet Star observed the situation in consultation with the Vulcanic Ash Advisory Center of the Australian Bureau of Meteorology.

Chinese families should now sweep graves. Thousands have not yet buried those who have died from coronavirus.