Barbara Bush changed with her country 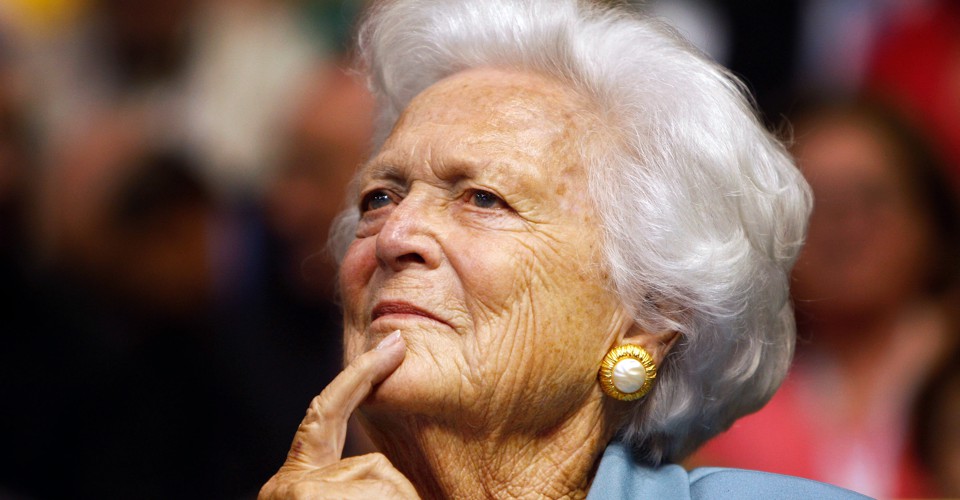 Some famous people are much less interesting in person than you would expect. Some are more interesting. And a few are rocking your world. For me, Barbara Bush, who left us on Tuesday, occupies this last category almost alone.

Many of the honors for the former First Lady present her as a flashback to an earlier era of American politics, the silver-haired Doyenne of a political dynasty. But I learned to appreciate her for another reason. Her land has changed dramatically during her long, full life. But even as some in their Republican Party withdrew from these changes, Barbara Bush did not stop asking, learning and adapting ̵

1; she changed with the nation that served her and her family.

I met Barbara Bush in October 2015 in the Bush connection at Walker & # 39; s Point. I met with historian Jon Meacham, who came to thank the Bush for their help with his biography of the 41st President. Vascular Parkinson's disease had limited the President's use of the voice, so his wife brought much of the conversation during a four-hour visit.

With two visits from historians, she began to remember the Great and Near-Grand, and her husband had known it. Their comments could cut, but they were not mean. And there was clearly no filter, or at least none, that I could recognize. "Bill Clinton has a special way of playing golf," she told us. "He's moving the ball" – making a stifling move – "and he's having a hard time counting." But she liked Bill, praising him for his sympathy with her husband, even when she reprimanded him for cheating on golf.

And she flashed her famous-sour joke. I started patting one of the family dogs in the very informal family room of the big house the older bush used in Kennebunkport. "This will bite anyone who tries to hug me," she warned. "But I did not ask your permission to hug you," I answered, a little startled. (Which stranger would try to hug an intelligence officer before asking?) Without missing a beat, she replied, "If I do not like you, I'll let you."

She could be serious too, and as she did, you could feel why she was probably the strongest backbone of the Bush family. The day before, nine people had died in a mass shooting at a community school in Oregon. "We have no weapons in our house because of me," she explained. "I do not like weapons."

By the time I was researching a gay men's story in Washington, DC, I asked her about the role she played in encouraging her husband to acknowledge the AIDS crisis. She had suggested that he visit an AIDS clinic during the 1988 campaign, which he did. And in her first few weeks as a First Lady, Bush visited a young man in a hospital who died of AIDS. "People thought it was an infectious disease [an easily]," she recalled.

When I said she was politically brave, she said, "Not if you think about it, it was not courage." "But President Reagan did not do it," I countered. The look she gave me signaled her opposition to Reagan. She then began to describe the dying AIDS patient. "This man, who was a Catholic, had lost his mother when he was young and rejected by his father." Bush tore when she talked about him. She added that he had died, as well as a baby who had AIDS and had also visited her. Although these visits had taken place almost 30 years ago, they seemed to affect them as if they had happened only a week earlier.

We had lunch at a restaurant near Goose Rocks. Barbara Bush mentioned that the person she greeted as a friend when we all entered the dining room was gay. "I felt that," I said. I paused, then added, "I'm gay." Immediately she answered with a smile: "I felt that."

That was not what I expected to discuss with a 90-year-old former First Lady. But talking about LGBT affairs had sparked something that was visibly disturbing for Mrs. Bush. "Well, you know what I think about President Obama, did you see that he has just appointed a transgender person – are we always calling for the appointment of a heterosexual?"

She said she was not against hiring her I just did not understand why the White House should point out a person's sexual identity. I explained, as much as I could, the sensitivity of the transgender community, because the focus of the fight for LGBTQ rights has been on the G and the L for so long, respectfully reminding them that the White House recognizes a group positive impact on the self-confidence of this group, but also on how other Americans see this group in our society.

She did not seem convinced that the Obama White House had done the right thing. She asked me what I thought of Caitlyn Jenner, who had appeared as a transgendered woman just six months ago. I described it as an important symbol. "But why is she a heroine?" As she repeated the question, Bush wondered how important sex change is for the definition of gender. I told her about my own experience as a gay man: "It is a difficult journey for all of us, and we should only hope that people are happy." I argued that a person should be allowed to agree with their own sexuality or gender identity in their own way. And she agreed. "It's not a choice," she said more as a statement than as a question. "We're wired this way," I agreed.

While lunch was slowing down, Bush explained how the world around her had changed and how she had changed. She vividly recalled that her hometown of Rye, New York, when she grew up, had not only no African-Americans, but full of prejudice against the Irish and the Jews. "Everything has changed and it's good," she concluded. However, she feared that not all Americans could accept the changes, such as her and her husband. In particular, she feared that someone full of hate would try to dispel her anger at Obama. She criticized the politician Obama – "every day he blames George [W.] for something" – but she mentioned more than once how worried she was about his physical safety in the country's current climate.

When we left ours, she became the Matriarch of a great political dynasty again. "Remember, tell your friends when the going gets tough, do not forget that Jeb is the best!"

I admit that I left lunch a little worried because I had been so disarmed by Barbara Bush's openness. I had become too casual. When I got home, I read her inscription in her book "With Every Good Wish & so enjoyed being with you!" – and felt a bit calmer. But it was still a shock when Jon told three weeks later about a note she had written to him just days after our visit.

"I enjoyed lunch and Tim won the argument or he changed my mind about so much, transgender people were born that way … Please tell him that I learned a lot from our lunch at 90 …"

In the next few days much will be written about Barbara Bush. She deserves high praise as a strong mother, wife, grandmother, and first lady, and an advocate of literacy and courtesy. What I particularly care about is the personal experience of her willingness not just to learn about people she did not understand, but to realize that she may be wrong. And she did that at the age of 90 – and at a time when her son was leading a party whose voters especially believe America accepts transgender people too much. Now, in this even more tribal moment, America can afford even less to lose her.