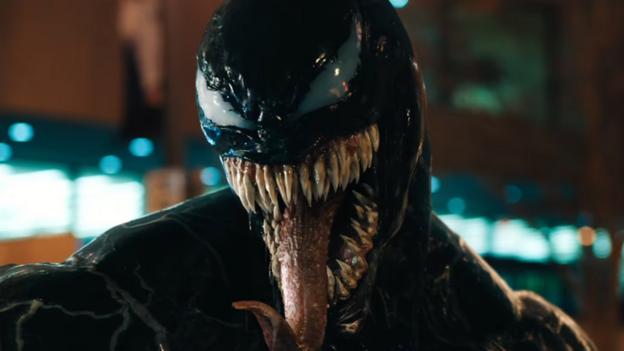 No matter how hard your job is, you can find comfort in the knowledge that it could be worse: You could be a publicist working for Sony Pictures. The studio's latest blockbuster, Venom, features an alien monster from the Spider-Man comics that acted as the villain in Sam Raimi's third Spidey movie. The plan to make his own film has been heard for over a decade. And now it is finally here, with Tom Hardy in the lead role and Ruben Fleischer (Zombieland) directing. A few days ago, however, an interviewer asked Hardy to nominate the best scene in the film. "Things that were not in the movie," Hardy replied. He explained that his favorite "30 to 40 minutes" were cut out: "Crazy puppetry scenes Dark comedy scenes … They just never made it."

Under these circumstances, any negative review might seem superfluous, as it could not be more damned than the movie's own leader. But it's easy to see what triggered Hardy's complaint. Venom is obviously the victim of brutal cuts, and the deduced, sketchy B-movie that's left is as harsh and hurry as a trailer.

When he's not grumbling in interviews about the movie, Hardy plays Eddie Brock, a television journalist who shows his own hit network in San Francisco, even though he's always unshaven and looks like he's having a shower. (His boss tells him helpfully that "there is no investigative reporter better than you," or perhaps that explains it.) His final job is to profile Carlton Drake (Riz Ahmed), a vague Elon Musk entrepreneur who has shoveled his billions into space exploration.

One of his spacecraft has just crashed in a Malaysian forest – or rather crashed – with a load of sentimental extraterrestrial dope. (Two new films, Life and Rampage, contain much more exciting versions of the same scenario.) Most of it is returned to Drake's Californian lab, where he wants to create a new species by connecting the living slime with human hosts. By the way, do not ask how this bond works or what planet the aliens are from, or why one of them should ultimately choose to call himself Venom. That kind of detail must have been cut out along with Hardy's favorite scenes.

Maybe Ahmed's favorite scenes were also cut out. He pretends to be bored with his flimsy character, who looks less like a charismatic megalomaniac than a buddy pursuing the megalomaniac pleading. As for Drake's real cronies, they are presented as respectable professionals, and yet, almost none of them seem to be disturbed by the number of people being reduced to withered bodies in their experiments. This amoral extends to Eddie's fiancé Anne, who is played by Michelle Williams and has no special features, apart from her short tartan skirt and long blond wig. Considering that she's a lawyer covering up Drake's murderous research, one might expect Anne to feel a little guilty about her filthy job, but it never occurs to the filmmakers that she is anything but angelic.

At least Eddie meets Drake, but the next day he is released from his television job. He spends several months in a bar, because apparently no other Outlet wants to hire the world's best investigative reporter and he does not own a website or a YouTube channel. Superhero films may not be known for their logic and plausibility, but Venom's plotting drives them – even before we get to the sentient "symbiotes" of another world.

She gives up being a sombre science. It is a relief when we finally come to them. As Eddie retreats into Drake's lab, a sticky black puddle slithers in and he has to share his body with a creature from outer space. First, the alien intruder is only a ragged voice in his head, barking instructions and poking into his conversations. Then it sends out sombre tendrils to knock down Drake's henchman. And finally, after nearly an hour, the mud envelops him and he becomes an oily 10 foot monster with an obscenely meandering tongue and teeth like sharp stakes. He is the stuff of nightmares – especially the nightmares of a dentist.

But rather than scare him, the movie quickly realizes that Venom is a cartoon knucklehead who does not threaten Eddie or his friends. In fact, a movie touted as the darker, scarier alternative to the standard superhero blockbuster becomes lighter and more child-friendly than most of them. In the last half hour, he ceases to be a scary science fiction horror movie and tries to become a crazy buddy comedy, with the Eddie / Venom double act owed to Laurel and Hardy as well as Jekyll and Hyde.

This section is surprisingly entertaining. Hardy takes on his dual role with the manic gusto of Jim Carrey at The Mask and Steve Martin at All of Me. And there are a few decent action sequences in which motorbikes and cars haunt each other up and down the steep streets of San Francisco.

But Venom has just found his comic tone when he crashes to his climax. The symbiote suddenly decides to be a hero rather than a villain, and then encounters another symbiont that is almost identical to the T1000 in Terminator 2: The Last Day. And then we end with a fight between two growling CGI giants, a predictable but relentlessly short punch-up that brings back memories of the 2008 The Incredible Hulk. This movie was, as you may remember, positioned as the first episode in a long running franchise, but no sequels were made. It is also unlikely that any Venom sequels will be made.

And if you liked this story, sign up for the weekly bbc.com features newsletter called "If You Read Only 6 Things This Week". A handpicked selection of stories from BBC Future, Earth, Culture, Capital and Travel delivered to your inbox every Friday.