BBC – Culture – How good is the Game of Thrones final? 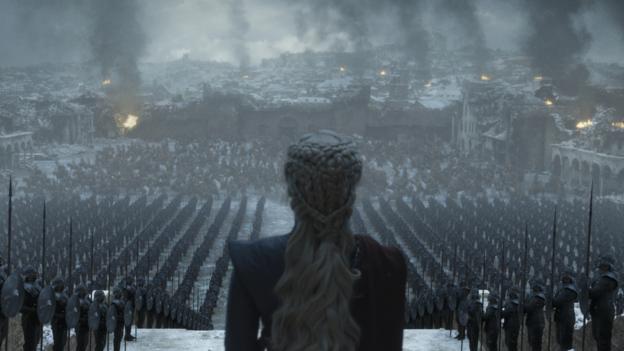 Warning: contains spoilers about the final episode of series 8.

One day, a prestige HBO drama will likely be made out of the momentous fall-out from last week's penultimate Game of Thrones episode. Afterward, the decision to have Daenerys torch the whole of King's Landing and its citizens with fire fire blew the roof off the whole enterprise for many – only for others to grumblers were wilful killjoys who should accept what, in their eyes, a perfectly reasonable plot twist.

– Game of Thrones, The Bells, review

– The horror of the near-near-future

– Eight TV shows to watch in May

For what it's worth, I think the events of last week were ruinous, in more ways than one ̵

1; and it's worth emphasizing that most of us have done about Daenerys' wholesale transformation into the Mad Queen never thought of her as 'good' or expected to be upstanding rulers of the Seven Kingdoms – far from it. A clunking privilege of plot over character.

Which is why, in reviewing this week's final, I've vowed to try and even as-handed as possible. To swallow my objections, take what has happened as read, and see the creators have now set out. And, largely, it does – beginning with a remarkable, wordless opening sequence in which Tyrion wanders through the ashen remains of the citadel, surveying the wreckage, and the charred bodies. Saturated in gray, the scene eerily evokes a nuclear holocaust – it's a nightmare of the night King bringing winter to Westeros, with falling snow, it It is likely that, for all the committed cynicism of the show's worldview, in the final reckoning it would not allow the instigator of such a cataclysm to go unpunished – and so it proves. In a Nuremberg rally-like address to her armies, our self-righteous tyrant Dany suggests her whiffy 'liberating' mission is far from over, while kitted out in a fetching but distinctly fascistic black leather ensemble.

Are you ready to believe that they have a finely tuned appreciation of the symbols of autocratic power?

Amid what remains of the Great Hall, her nephew-cum-lover-cum-dopey-wingman Jon Snow stabs her through the heart, while snogging her and declaring forth "my queen now and always". The scene, thankfully, really lands – fuelled, maybe, by the sheer torturedness of their predicament, Kit Harington and Emilia Clarke suddenly find a chemistry that has notably absent between them up to this point. It is a moment only slightly diminished by the clunking absurdity of what follows when Drogon makes an appearance. He is more or less peeved at the death of his mum, he refrains from flaming himself. Which works well to hammer home the show's central message about the inherent corruption of monarchical rule, but does the question: are we expected to believe that there is a finely-tuned appreciation of the symbols of autocratic power?

Thankfully, the story recovers its footing in the next scene when it comes to the show's surviving lead characters on the fate of the Seven Kingdoms, now that it's lost two queens in quick succession. I'm particularly glad that, for all that the show has condemned despotic rule, it does not succumb to the pat option to have the characters happily establish a democracy in its place. Indeed, when Samwell Tarly (with a stray water bottle next to his leg, another continuity clanger that has already had the internet frothing) suggests that they might consider having the people vote for their king or queen in future, he is laughed down by his comrades – a knowing upend of expectations, which somehow expresses exactly what has been made, at its best, so refreshing.

David White and DB White, looking for a way to end the story, are neither fancifully idealistic nor impossibly bleak. Older people have their way of life, but they have no interest in power for their own sake and can not bear children, thus paving the way for a new system of non-hereditary rule. That leader, not entirely unpredictably, is Bran, the Seer Stark who finally has something useful to do after a series of superfluous and obscure visions.

He's a choice that makes narrative sense, though it has to be said that there is something quite humorous about Tyrion's justification for picking him up that he has the greatest "story" – given that, for many viewsers at least, his storyline has been quite the dreariest. In any case, when he asks Tyrion if he did the right thing in killing Daenerys, he simply replies: "ask me again in ten years." [19659003] In fact, though, not one but two new rules are established. Sansa Stark – one of the few characters with a truly well-constructed character arc – can rejoice in seeing her declare the north of the other six kingdoms, and crowned as its queen. In other plot tie-ups, Jon is packed off to the night's watch, as a way to appease Daenerys' followers while saving him from a death sentence, while, ever the lone ranger, Arya vows to continue her adventuring by traveling West of Westeros into the great unknown.

I think the complaints about the past couple of years have been made. It's easy to sneer at Game of Thrones' so-called 'titled' fans, as they have been petitioning for their final season to be remade – but, at the same time, it seems to me perfectly reasonable

However, it is true that a sprawling epic like this, with chaos built into its very narrative DNA, is what it's all about always likely to have faults. In fact, the in-built imperfection seems to be wryly referenced in one of the closing scenes, where George RR Martin proxy Samwell reveals he is in possession of a book detailing the history of everything. And its title? 'A Song of Ice and Fire' – the same one, of course, as for Martin's series of novels. However when Tyrion asks about how he is portrayed in it, he discovers, humiliatingly, that he does not even get a mention. Benioff and Weiss – save a thought for example, for poor Brienne of Tarth, that one time vanquisher of gender norms whose character, in the end, what sacrificed to a gratuitous romantic plotline.

But, finally, let us remember the good times the show gave us, the gasps it induced, the caustic quippery revels in it (Olenna Tyrell 4 Eve), and the sheer amount of conversation it inspired, something which is itself proof of its cultural power. And hopefully see you back in the next year or two, to see more of the affairs of Westeros once more, when the upcoming Games of Thrones will begin.

Love TV? Join BBC Culture's TV fans on Facebook, a community for television fanatics all over the world.

And if you liked this story, sign up for the weekly bbc.com features newsletter called The Essential List. BBC Future, Culture, Capital and Travel, delivered to your inbox every Friday.