Behind a street shot in Malaysia, Israeli-Palestinian intrigue 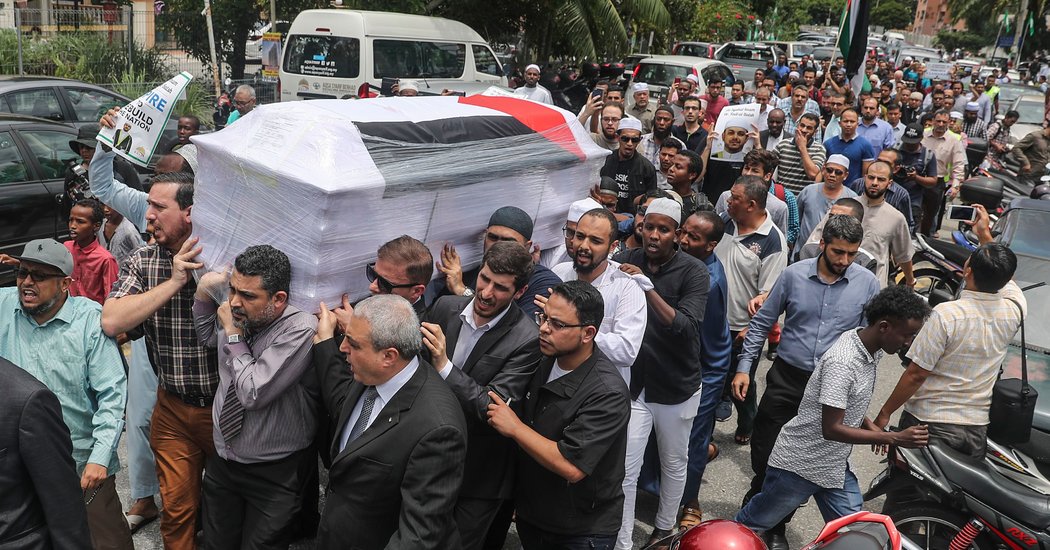 Mr. Batsh, who had written a document on drone applications in 2013, had been sent there to research and acquire weapons systems and drones for Hamas, the intelligence officials said on condition of anonymity to discuss a secret program.

Mossad said he was particularly interested in Hamas' assaults on unmanned aerial and submersible vehicles, according to officials who could be used to attack Israeli targets more effectively than the ones Hamas used during their recent wars with Israel.

Israel has distanced itself from the allegations was responsible for the death of Mr. Batsh. Defense Minister Avigdor Lieberman accused of killing inner rivalry within the Palestinian leadership

The assassination of Mr. Batsh, 34, in the suburb of Kuala Lumpur of Gombak, known as Little Arabia, does not only illuminate the increasing Presence of Hamas and other groups here, but also the emergence of Malaysia as the epicenter of international intrigue.

This was the second major assassination in the Malaysian capital in just over a year. In February 2017, Kim Jong-nam, half-brother of North Korean leader Kim Jong-un, was killed at Kuala Lumpur International Airport by two women who, according to the prosecution, had left a deadly nerve on his face. The women from Indonesia and Vietnam are being tried for their death, but at least seven North Koreans suspected of killing escaped or were allowed to leave the country.

Malaysia is also known as a port for contraband, from North Korean weapons to endangered animal products and illegally felled trees.

"It has been a tolerant environment for many crooks, as long as their focus was not on Malaysia," said Zachary Abuza, a professor at the National War College in Washington who deals with Southeast Asian security issues.

Malaysia's government has sympathized with the Palestinian cause for decades: it has no diplomatic relations with Israel, and Prime Minister Najib Razak visited Gaza in 2013 at the invitation of Hamas, who governed the area. The intelligence officials said Hamas has begun to see the country as an ideal place to develop its research ambitions in recent years.

In another case, in 2010, Palestinians sent to Malaysia trained in paragliding for attacks, according to a statement by Israeli intelligence. Malaysian officials denied any involvement in such a conspiracy.

The United Malaysian National Organization, or UMNO, the dominant party in the coalition that has governed Malaysia since independence, maintains relations with an unusual set of political organizations around the world. For example, until Kim's assassination last year at Kuala Lumpur International Airport, UMNO maintained a formal relationship with North Korea's ruling Labor Party. Malaysia was one of the few nations in the world that North Koreans could enter without a visa.

The relationship between UMNO and Hamas is even more obvious. Representatives of Hamas are invited to the UMNO party conference each year.

Connoisseurs and students of Mr. Batsh in Malaysia, where he lived with his wife Enaas al-Batsh and her three young children, characterized He was a friendly professor dedicated to improving life in his homeland Gaza dedicated. His public research focused on renewable energy, and he said that he wanted to bring electricity to a Palestinian area that was becoming increasingly scarce. Batsh won scholarships from a Malaysian sovereign wealth fund, the first Arab to receive such an award. In 2016, Malaysian Prime Minister Najib awarded Mr. Batsh a prize

"I know nothing about his home policy, but I know he was a great inspiration to all of us for coming out of Gaza and being successful in Malaysia ", said Jailani Othman al-Kathery, a Yemeni English teacher who visited a mosque in Gombak, where Mr. Batsh gave Quran lessons and served as an imam.

Mr. Batsh told friends in Malaysia that he barely avoided attempting to live in Gaza. In 2014, his uncle Tayseer al-Batsh, police chief of Gaza, was nearly killed by Israeli air strikes. Eighteen members of the Batsh family died in these attacks.

But Mr. Batsh did not address his family's tragedy, his friends said in Malaysia, even though he wrote posts on social media criticizing Israel over its conflict with Gaza. "Almost everyone in Gaza has lost a family member," said Hafidzi Mohammed Noor, chair of Humanitarian Care Malaysia, a charitable organization providing humanitarian aid to Gaza. "For him, for all the Palestinians here in Malaysia, that's normal."

Over the weekend, a funeral tent was set up in the Jabaliya refugee camp in Gaza, where Mr. Batsh grew up. Ten masked members of the Qassam Brigades, the armed wing of Hamas, stood in front of the tent, a position that usually meant the death of a top fighter.

Banners hanging in the tent were described by Mr. Batsh as the "engineer leader" for the Qassam Brigades and "our martyr to God." Another relative of Mr. Batsh's was called by family members as a commander in the Islamic Jihad, a separate militant group operating in Gaza.

On the day he was killed, Mr. Batsh was to travel to Istanbul to attend an academic conference. However, a Middle East intelligence official said that Hamas's efforts to cultivate its overseas scientists have been channeled from Istanbul and that Mr. Batsh is meeting with unit leader Maher Salah on arrival in Turkey should.

Western and Middle Eastern intelligence officials said Mr. Batsh may have been involved in negotiations on North Korean arms deals through Malaysia. Egypt has recently confiscated a shipment of North Korean communications components used for guided missiles destined for Gaza. An intelligence official said that Mr. Batshh had helped broker the deal.

Although such weapons are subject to international sanctions, the United Nations reported in a report last year that a tank grenade led by the North Korean intelligence agency had acted as a military communications system from Malaysia.

Malaysian officials rejected this report. And this week, officials would not comment on allegations that Mr. Batsh was researching or trying to buy weapon systems.

Mr. Batsh is not the first Hamas-bound engineer to be sent abroad.

In 2011, a Palestinian electrical engineer named Dirar Abu Sisi was abducted in Ukraine and sent to Israeli jail more than a week later. He was sentenced to 21 years in prison for helping Hamas make rockets, among other things.

In 2016, Mohammed Zawahri, a Tunisian scientist and Hamas military commander who developed drone warfare technology, was shot dead in the Tunisian city of Sfax. In January, a car bomb injured Mohammed Hamdan, a Hamas operative who was to build a workshop to manufacture rocket components and drones in Sidon, Lebanon.

On Wednesday, the Malaysian police said the motorcycle was being used in Mr. Batsh's murder had not been stolen. They posted a photograph of one of the suspects, a fair-skinned man with a beard, saying that he was probably still in the country.

Mr. Batsh's body was released by the Malaysian authorities on Wednesday, and a funeral prayer was given at the Gombak Mosque, where he served as an imam.

At a press conference on Tuesday, his widow said she would return to Gaza with her three children. She added that she has her own Ph.D. Studies through an Online Course: Education, she said, is the passion of her husband.