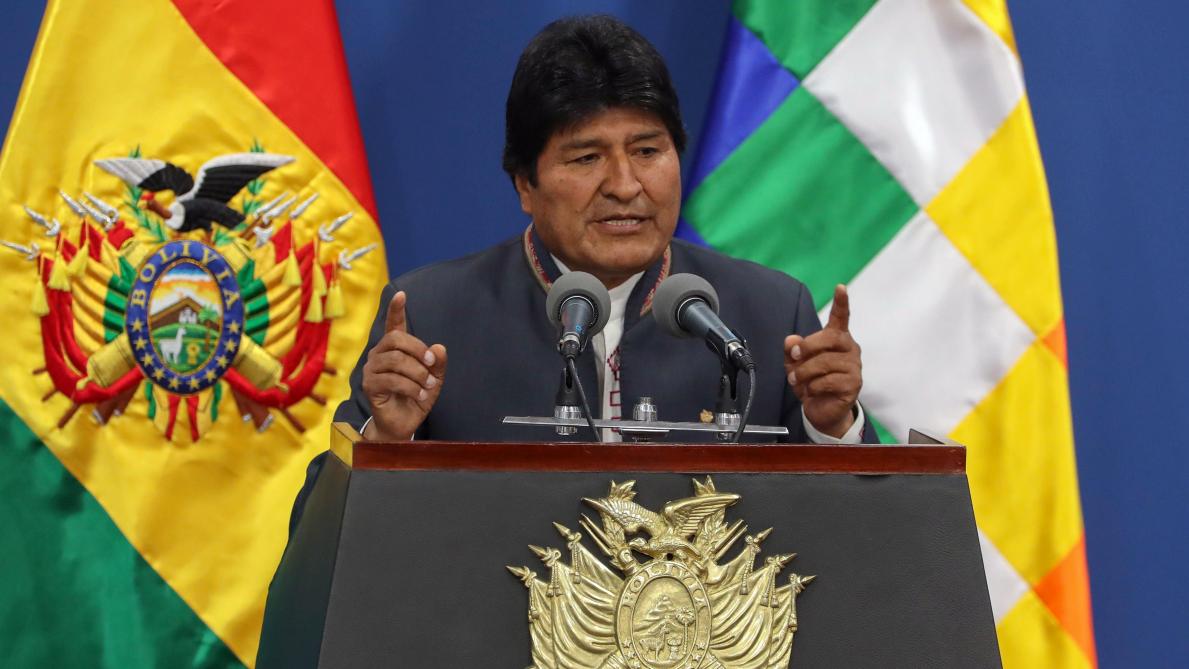 The army and the police had just called for his departure.

L Bolivian President Evo Morales announced his resignation on Sunday after three weeks of fierce protests over his re-election to a fourth term. The police and the opposition demanded his departure. "I give up my position as president," said the 60-year-old indigenous leader, in power since 2006, after a day marked by new clashes between protesters and police and resignation. in a series of ministers and deputies. "The coup took place," added Vice President Alvaro Garcia Linera, who also resigned.

Shortly before, General Williams Kaliman, Commander-in-Chief of the Army, urged the head of state to "give up his presidential mandate to facilitate peace and maintain stability in the interests of our Bolivia." "We join the call of the Bolivian people to propose to President Evo Morales to step down to pacify the Bolivian people," said the Commander-in-Chief of the Police, General Vladimir Yuri Calderon.

Accompanied by the crowd, Luis Fernando Camacho, the most visible and radical leader of the opposition, went to the Government headquarters in La Paz to symbolically hand in a letter of resignation to the signature of Evo Morales and a copy of the Bible

The Political Crisis had been brutally accelerated on Sunday in the Andes, where general strikes and demonstrations paralyzed activity for ten days, in a climate of violence and clashes between the two camps. In three weeks, the wave of protest left three dead and 383 wounded.

The morning announcement by the President of a new election – an option he had previously rejected – aimed to "pacify" Bolivia. But brought no peace. The army has ordered "air and ground military operations to neutralize armed groups acting outside the law," General Kaliman said in reference to violent attacks on opposition protesters' buses, which had resulted in La Paz

Concerned by demonstrators who burned down his home in Potosi (southwest), the National Assembly spokesman, Victor Borda, retired, who, according to Bolivian television, was imitated by a dozen MPs. Shortly thereafter, Minister of Mining César Navarro quit his job and said he wanted "to keep his family" after the burning of his house and the aggression of his nephew. "The course of events contradicts my personal principles as well as my spiritual and democratic values," wrote Minister of Hydrocarbons, Luis Alberto Sanchez, also in his letter of resignation published on Twitter.

Durant During the day, several opposition leaders called on the head of state to resign. "If he still has a bit of patriotism, he should retire," pleaded centrist Carlos Mesa, the unlucky candidate in the first round of the presidential election on October 20.

"Evo Morales has broken the constitutional order and has to resign Luis Fernando Camacho added The President had promised to" renew all members of the Supreme Electoral Tribunal (TSE) "and then" call new elections "without indicating the date of this new ballot or represent it.

Seven TSE members are being prosecuted

The Organization of American States (OAS) has requested cancellation of the poll on Sunday morning, which is subject to irregularities. It also called for the convening of a new vote with the necessary guarantee, "the composition of a new electoral body", alluding to the TSE, including seven members, who were prosecuted on Sundays for alleged involvement in irregularities. 19659004] Deputy US Secretary of State for Latin America, Michael Kozak, asked the OAS in a tweet to send a mission to Bolivia to ensure that the new elections "free and fair" are the reflection of the will of the Bolivian people.

The October 20 poll had led to the re-election of Evo Morales for a fourth term until 2025, an option that was rejected by the people in a referendum in February 2016. His scores announced by TSE, that of Carlos Mesa more than 10 points higher, the opposition immediately described it as fraudulent.

Signs of exacerbation The situation has intensified in recent days due to the mutinies of police units in several parts of the country and the seizure of state media by protesters Evo Morales had once again launched a call for dialogue on Saturday, which the opposition immediately rejected, while Cuba expressed its support for the "putschist adventure of imperialism and oligarchy."