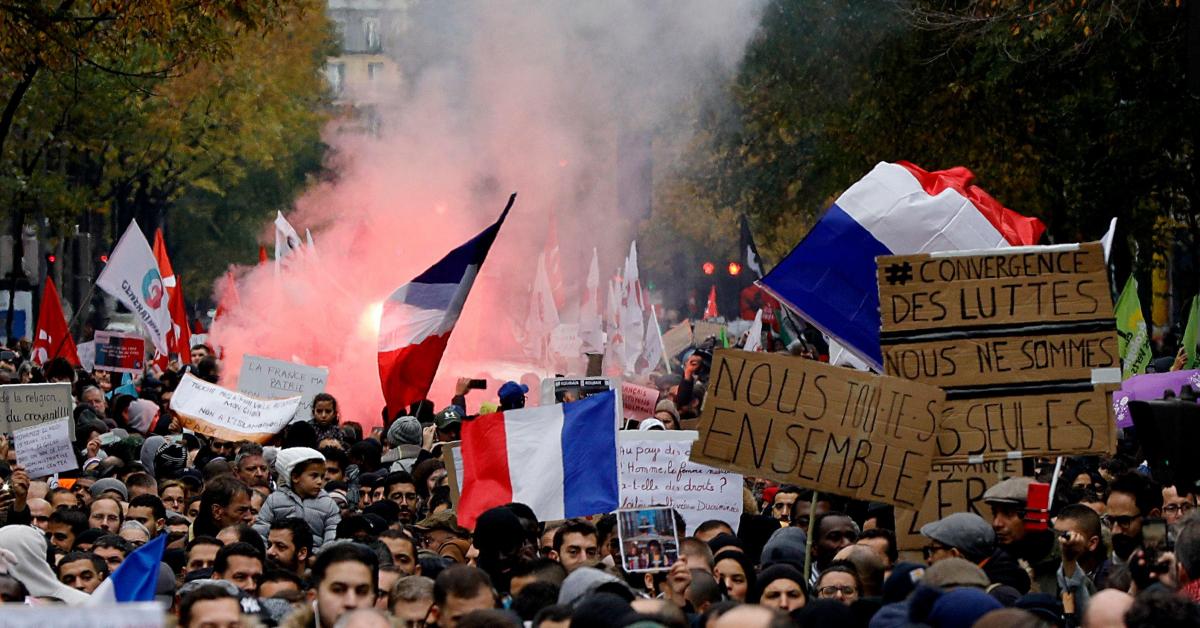 The march against Islamophobia gathered 13,500 people on Sunday in Paris, according to the company Occurence for Collective Media, including AFP. This call, issued by several individuals and organizations such as the Collective versus Islamophobia in France, sparked controversy within the political class based on a multi-week revived debate about wearing the veil and secularism.

"Yes, to the criticism of religion, not to the hatred of the faithful", "Stop Islamophobia", "Living together is urgent", one could read for signs of protesters in the midst of many French flags. "Solidarity with veiled women," participants sang.

Part of the Gare du Nord at 1

3.00 pm, demonstration at the invitation of several personalities and organizations such as the NPA or the Collective Against Islamophobia in France, has to arrive at 4 pm on the Place de la Nation.

The protest call was launched in the daily Liberation on November 1, four days after the attack on a mosque in Bayonne and in the context of a renewed debate about wearing the veil and secularism. The original message was "STOP Islamophobia", the "growing stigmatization" of Muslims, victims of "discrimination" and "aggression" The extent of hatred must not be exceeded. We are open to criticism, but we must not go beyond certain limits in aggression, "said one protester, Larbi, a 35-year-old entrepreneur.

" We want to be heard, to stand up for a society and to live together, not to excluded from society, "said Asmae Eumosid, a 29-year-old veiled woman from Epinay-sur-Seine (Seine-Saint-Denis).

Today we hear everything and everything about Islam and veiled women. To stigmatize Muslims to keep them out of society, "said the car industry engineer.

In Marseille lived a few hundred people – Muslim families, but also trade unionists and left-wing activists – Also on Sunday afternoon, Aix's doors gathered under signs "Islamophobia kills". The crowd shouted, "We are all children of the Republic."

Claudine Rodinson, a 76-year-old retiree who has traveled with a handful of Lutheran worker activists, does not understand those who "have left their dignity behind."

"There is a scandalous propaganda against Muslims, an amalgam of terrorism and Islam," she denounces.

Since the call for protest, the political class has been torn over this topic. The mere notion of "Islamophobia" as well as the identity of some of the signers of the solicitation led some of the left not to associate with the PRG or the PS (who had announced they were working for the organization)

However, at the Paris procession several elected representatives of subordinate France (Clémentine Autain, Danièle Obono, Eric Coquerel …) present alongside their leader Jean-Luc Mélenchon, who called before the march started "not to confuse some people with the value of the thing that served becomes".

Also on the street, PCF spokesman Ian Brossat believes he has a climate of hatred for Muslims. "" We can not let our arms dangle, "he added as he turned down attacks by the National Assembly President.

Marine Le Pen had indeed estimated on Saturday that it was a demonstration hand in hand with the Islamists. "

Several government members also had harsh words against the rally, by State Secretary for Youth, Gabriel Attal , was described as "unbearable".

France Insoumise and senior executives of EELV are stuck in patronage and communitarian jams, "he denounced, while Elisabeth Borne, Minister for Ecological and Solidarity Transformation, pointed to" ambiguity "and said the march had people" against each other "attracted."