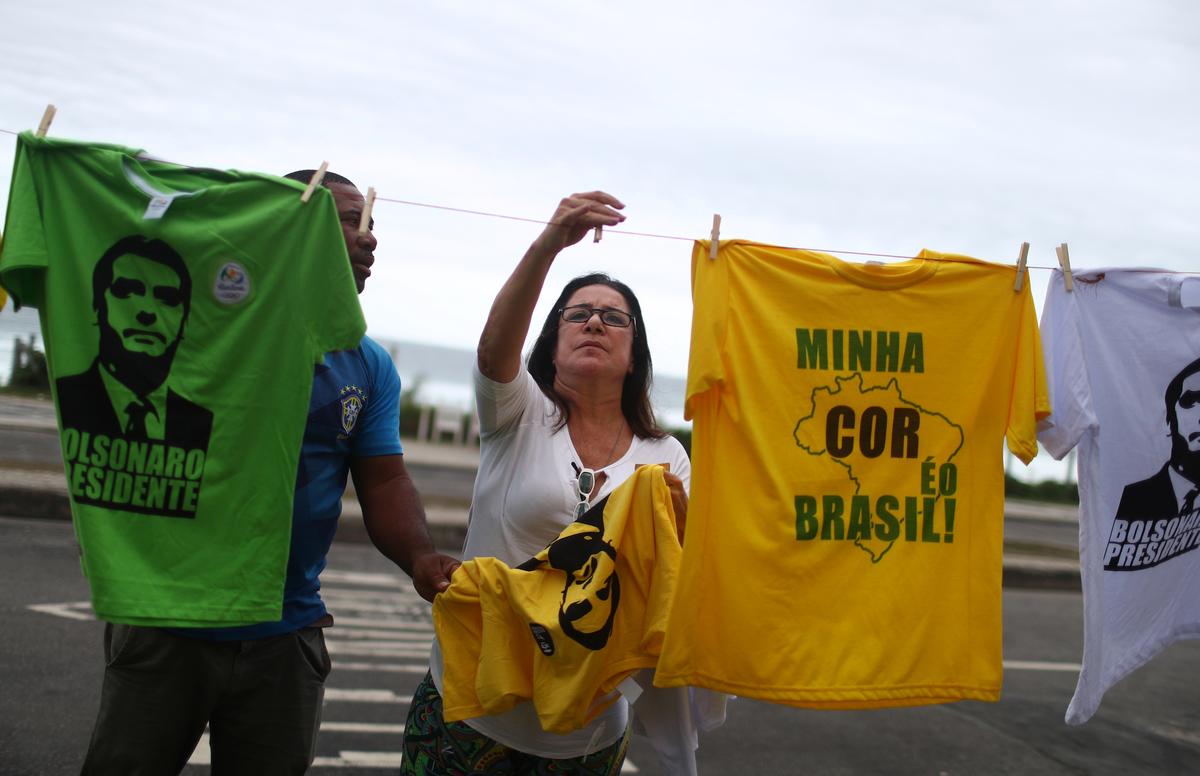 SAO PAULO (Reuters) – Brazilian President-elect Jair Bolsonaro has reiterated his most controversial election promises by calling for a looser gun law and urging that a high-level anti-corruption judge back his government and promises government media advertising delete the "lie".

A woman takes a T-shirt with the image of Brazil's new elected president, Jair Bolsonaro, in front of Bolsonaro's condo in the Barra da Tijuca district in Rio de Janeiro, Brazil October 29, 201

In interviews With TV channels and social media, Bolsonaro, a 63-year-old former army captain who won 55 percent of the Sunday's election and is sworn in on January 1, made it clear he would not waste time enforcing his conservative agenda.

Bolsonaro, who ran on a law-and-order platform, said he wanted Sergio Moro, the judge who oversees the lengthy "car wash" corruption process, to condemn the former president Luiz Inacio Lula da Silva of the Nursing Home, to join his government as Minister of Justice.

Besides, he said he would put him before the Supreme Court. The next vacancy at the court is expected in 2020.

Moro did not respond to requests for comments.

But Ascânio Seleme, chief editor of the newspaper O Globo, wrote Tuesday on the newspaper's website that Moro should not accept the offer to become Minister of Justice. He has too much work for upcoming corruption cases, wrote Seleme. [1659004] Seleme added that this would also compound the allegations made by the Workers' Party (PT), whose candidate Fernando Haddad lost to Bolsonaro on Sunday, that Moro was taking revenge on the PT and working to keep them out of power.

The PT charges Moro with convicting Silva, his founder, of the graft to prevent him from making a presidential run.

The conviction was upheld on appeal and the Supreme Court of Brazil has rejected numerous requests to exempt the former president, commonly known as Lula.

The Globo newspaper reported in a separate article, citing unnamed sources close to the judge, on Tuesday that Moro weighed Bolsonaro's offer because he felt he could reassure citizens that the elected president do not govern democratically.

Late Monday, Bolsonaro said in an interview with Globo TV that he was going to cut off publicity funds flowing to any "lies" media.

During his campaign, the right wing imitated US President Donald Trump's strategy of aggressive confrontation with the media. In particular, he aimed at Globo TV and especially Brazil's largest newspaper, the Folha de S.Paulo.

"I'm absolutely in favor of the freedom of the press," Bolsonaro told Globo TV. "But if it comes down to me, the press, the shameless lies will not have government support."

Bolsonaro referred to the hundreds of millions of reais that the Brazilian government spends on local media every year, mainly for promotions by state-owned companies.

The news portal UOL of the Grupo Folha, which also controls the newspaper Folha de S.Paulo, took advantage of Brazil's Freedom of Information Act as the basis for an article from 2015 that showed Globo in the year 2014 565 million reais received. Folha received 14.6 million reais this year.

The federal government's Communications Secretariat, which tracks the numbers, did not respond immediately to a request to see how much money the government has spent on media advertising since 2014.

Neither Grupo Globo nor Grupo Folha answered requests for comments.