Brexit: Backstop is part of the deal, says Michel Barnier 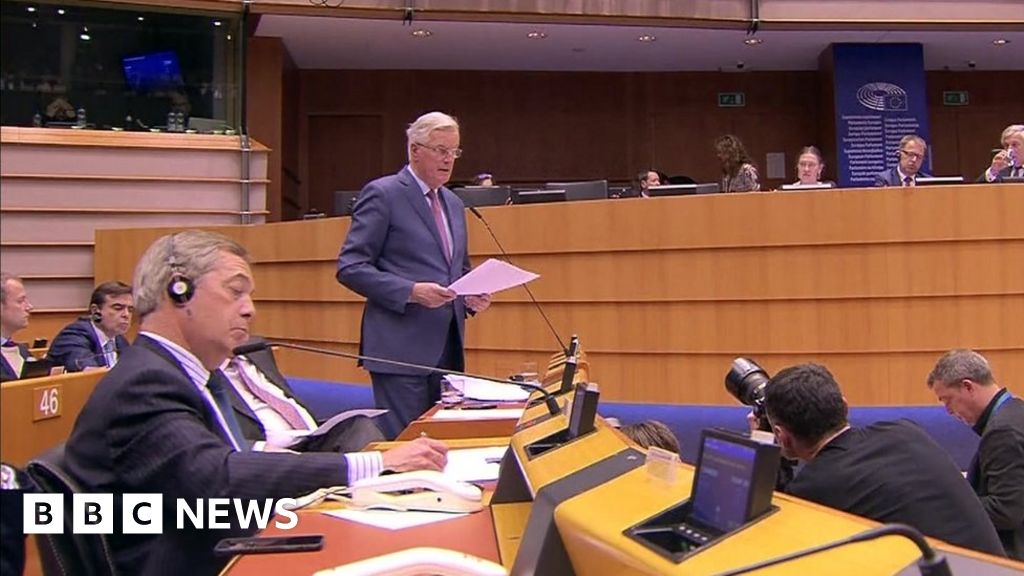 The EU's chief negotiator, Michel Barnier, says the Irish base is "part of the British Brexit Agreement and will not be renegotiated."

Speaking in the European Parliament, Barnier said it was a "realistic solution" preventing a hard line.

Instead, on Tuesday they voted for MEP Theresa May to "seek alternative arrangements" for the backstop.

The United Kingdom leaves the European Union on 29 March at 23:00 GMT. The backstop is an "insurance" to stop the return of goods and personal checks at the Northern Ireland border.

As things stand, the restraint system would actually keep the UK within the EU Customs Union, with Northern Ireland also adapting Some Internal Market rules.

This was one of the main reasons why Ms. May's Brexit deal was rejected in January with a historic head start in parliament, as critics say another status in Northern Ireland could jeopardize the existence of the UK and fear that the backstop will be permanent could be.

Ms. May has said that there are several possible alternatives to the backstops she wanted to discuss with the EU leaders.

This includes a "Trusted Merchant" to avoid physical physical checks Flowing through the border, "mutual recognition" of rules with the EU and "technological" solutions.

She also wants to discuss a time-limit on start-up and a "one-sided exit mechanism" – both of which have been EU options in the past.

But the EU's message was the restraint assistant, which remained an integral part of the resignation agreement – the so-called "divorce agreement", which agreed on conditions for Britain to leave the EU.

Mr Barnier said: "Quiet and clear, I say right here and now – with this resignation agreement proposed for ratification – we need this backing as it is.

" The rejection of restraint as it stands today runs on rejection of the solution that was found in the British, but the problem persists.

The Irish Deputy Prime Minister had previously issued a warning regarding Ms. May's future plans for the restraint attack Anyone who has admitted the "boundaries and divisions of the past" "Return would be hard to judge in history."

Simon Coveney added, "There are some things that are more important than economic relationships, and this is one of them."

The European Commission President, Jean-Claude Juncker, said he believed Mrs. May's "personal commitment" to avoid "sliding back into the dark ages", however he said the "safety net" of the backstop was necessary to prevent this.

He added, "We do not want to use this safety net, [but]. A safety net can be really safe if it can be removed at any time."

At the same time as the European Parliament was debating Brexit, Ms May and Labor leader Jeremy Corbyn held their long-awaited meeting on the subject, having previously fought over the prime minister's questions.

In the House of Commons, Mr. Corbyn repeatedly called on Ms. May to rule out a no-deal Brexit after a majority of MPs voted against the prospect on Tuesday in another vote.

But Ms. May said, "You can not just vote to refuse a deal, you have to support a deal."

Her later meeting, far from the cameras, was "very cordial", according to a Labor spokesman.

The two agreed to meet again soon, added the spokesman.

European Parliament Brexit coordinator Guy Verhofstadt reiterated his colleagues by criticizing the United Kingdom because it was not clear what they wanted from the deal.

He said the two years had been "strenuous" on both sides of the English Channel, calling on Ms. May and Mr. Corbyn to work together "not just to eat biscuits and drink tea" – to embrace a bipartisan solution come and stop "using and abusing Brexit to get rid of each other".

Mr Juncker said the House of Commons votes on Tuesday increased the risk of "disorderly" Brexit, but he still believed that an agreement could be reached between the EU and the UK, adding, "We are day and night Night work it happens, and to make sure that we are ready, if this is not the case. "