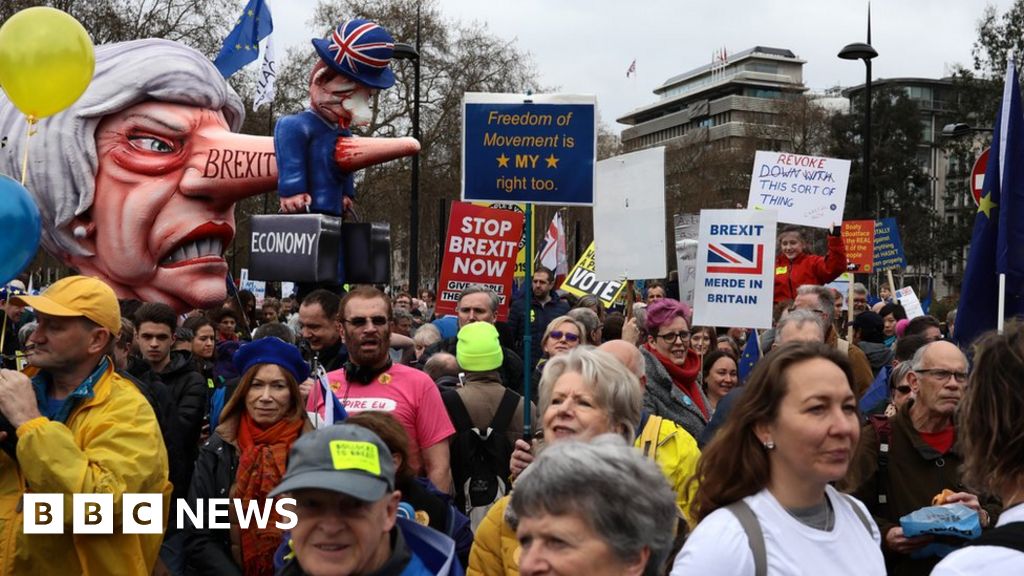 Tens of thousands are marching through central London, calling for another EU referendum as MEPs seek a way out of Brexit deadlock.

Demonstrators of the "Put it to the People" campaign march from Park Lane to Parliament Square before gathering in front of Parliament.

It comes after the EU has agreed to delay Britain's exit from the EU.

PM Theresa May has said that she will give up plans for another vote on her Brexit deal if there are not enough MPs there to support it.

If this agreement is not passed by MEPs, the UK will have to come up with an alternative plan or leave the face without a contract on April.

A record-breaking online petition on Parliament's website calling for the repeal of Brexit by revoking Article 50 has received more than 4.1

Liberal Democrat MEP Layla Moran said the petition could "give oxygen" campaign for another Brexit referendum.

Ms. Sturgeon said it was now "the moment of maximum opportunity" to avoid a no-deal Brexit.

Mr Watson is expected to be promised to support Mrs May's agreement if she agrees to hold a referendum on it.

He is expected to say, "I have come to the reluctant view that this and the only problem can be solved. In the eyes of the public, legitimacy has the legitimacy that people sign it themselves."

Ms. Soubry told the BBC, "It's good to see Tom Watson on the march today … I honestly believe this is the only way forward."

She added, "It's unbearable Situation in which we find ourselves, and I'm afraid Theresa is the problem.

"I'm not saying the government should go, because that's the last thing we want, but I think she has to go, and we need a temporary prime minister who can call on the British people to put the country first – that's what we are all going for today, a plebiscite.

Ms. Soubry also said that Ms. May had made a "desperately bad mistake" blaming Brexit's delay on MEPs in her televised speech on Wednesday.

Former Tory chief whip Andrew Mitchell agreed, "It was a very strong feeling she made a mistake However, to deny reports of growing pressure on Ms. May, he told BBC Radio 4 "Today": "Changing the Prime Minister would be a colossal mistake – it does not change the number [in the vote for Mrs May’s deal]". [1969027] 19659031] "Clear Decisions"

If Ms. May's deal is approved by MPs next week, the EU has agreed to postpone the Brexit deadline by 22 May If this is not the case and no alternative plan is presented, the UK is expected to leave the EU on 12 April.

In a letter to all MEPs on Friday evening, Ms. May offered to speak to Members in the coming days. "Parliament is getting ready to make meaningful decisions."

Children's Minister Nadhim Zahawi told the Today program that failure to comply with Mrs May's agreement would lead to "a collapse in our policies, not just the conservative ones Party, but for all parties ". He said that all other alternatives would call for MEPs calling for a much longer extension, to which Ms. May said she was not ready.

They would resign if Ms. May does not vote on the deal, Mr. Zahawi said "I can not justify it" to go to his constituents and say, "We did not make it and now we have to stay in the EU and participate in the European elections. " Image Caption

The march comes as the pro-Brexit March to Leave, which began a week ago in Sunderland, continues towards London.

Former ukip leader Nigel Farage marched back to Linby near Nottingham on Saturday morning, saying to some 200 Brexit supporters that Ms. May had "brought the nation into a state of humiliation".

Speaking from an open bus, Mr. Farage said that the people who gathered for the People's Vote March in London were not the majority before he led the crowds through the village.

Meanwhile, at 11:32 GMT on Saturday, the total number of signatures calling for the repeal of Article 50 was 4,151,815, exceeding the previous record of another Brexit application in 2016.

Margaret Georgiadou, who launched the petition, has tweeted that she "received three death threats over the phone". She also said she closed her Facebook account after receiving a "torrent of abuse."

Parliament's Petitions Committee tweeted on Friday that the signature rate was "the highest the site ever had to deal with" after the site crashed.