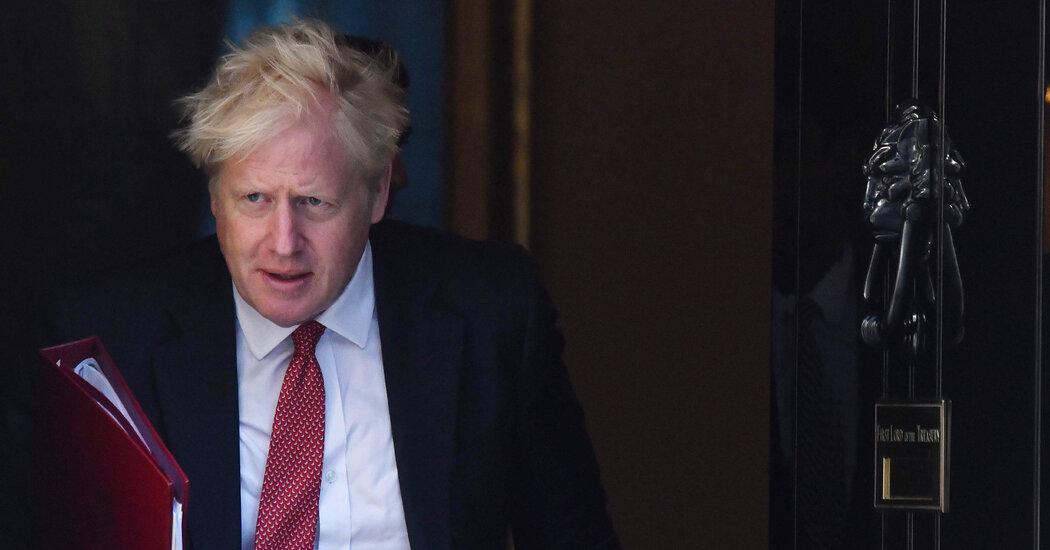 LONDON – The UK and the European Union were on a collision course Thursday after Brussels called for the swift withdrawal of proposed Brexit legislation, which Prime Minister Boris Johnson’s administration admitted violating international law.

The ultimatum, which Mr Johnson’s administration was quick to reject, is the worst crisis ever to negotiate a trade deal since Britain left the European Union’s trading zone. The talks have made little progress, but have somehow stayed alive.

The argument suggests that the moment of truth is fast approaching.

The proposed legislation would override aspects of a landmark Brexit withdrawal agreement that will treat the border between Northern Ireland, which is part of the United Kingdom, and Ireland, which will remain in the European Union.

In a harshly worded statement that underscored the growing tensions, the European Commission – the bloc’s executive branch – proposed legal action against the UK government, accusing it of threatening the fragile peace process in Northern Ireland.

Mr Johnson himself signed the withdrawal agreement with the European Union and championed it in last year’s elections on the way to a landslide victory. It was made in part to prevent the creation of a harsh border between Northern Ireland and Ireland.

However, European Commission Vice President Maroš Šefčovič said Mr Johnson’s bill would constitute an “extremely grave violation” of international law and called for its withdrawal by the end of the month. As stated, the legislation would give the UK the right to decide how sensitive aspects of the treaty should be implemented unilaterally, rather than through negotiations with the European Union as required by law.

The request was denied by Michael Gove, a senior UK cabinet minister, who said the UK government had “made it perfectly clear” that it would not withdraw the bill despite admitting that it was in limited violation of international law.

In issuing its ultimatum, the European Union has stopped taking an irreversible move or moving away from trade talks. And the two sides agreed to continue talking next week after what David Frost, Britain’s chief negotiator, called a “useful exchange” that took place separately on Thursday.

He and his counterpart Michel Barnier need to reach a trade deal next month if it is to be ratified by the end of the year, when Britain ceases to trade under European Union rules.

“With the EU saying you have until the end of the month, a page has to pull back,” said David Henig, director of the UK’s trade policy project at the European Center for International Political Economy, a research institute that is a difficult situation if we want to get a deal by mid-October. The EU will not back down. “

There is no sign of Mr Johnson’s intention to resign, claiming earlier this week that it would still be a “good result” not to reach a trade deal with the European Union. Although he has shown flexibility in the past and his government has made a number of policy reversals, the government has taken an uncompromising line on Brexit and has given few indications that it will compromise, let alone give way to Brussels.

While another crisis seemed almost inevitable in the Brexit negotiations, few expected the confrontation to be about creating an already signed and sealed deal. The UK argues that its new bill is intended to provide a fallback option in the event it cannot conclude a trade deal with Brussels, but it is not even clear that it will pass Parliament unscathed.

Critics said the risk of miscalculation for Mr. Johnson was high. The rules on the Irish border are not a marginal problem, but the core of the readmission agreement. They brought the bloc’s 27 members together during protracted, divisive negotiations with Britain over Brexit because they are seen as so closely linked to keeping the Irish peace.

“The EU will not allow the peace in Ireland to be used in negotiations,” said Mujtaba Rahman, an expert on Brexit at the Eurasia Group’s political risk advice. “They see very clearly what the government is doing and they are not bullied. Great Britain is playing a very dangerous chicken game with Europe. “

There are other international consequences for game art.

Democratic leaders in Washington warned Mr Johnson that he was jeopardizing his hopes for a transatlantic trade deal. Undermining Northern Ireland’s provisions in the withdrawal agreement would jeopardize the Good Friday Agreement, a peace deal brokered under President Bill Clinton that ended decades of sectarian violence in Ireland.

“If Britain breaks this international treaty and Brexit undermines the Good Friday Agreement, there is absolutely no chance a US-UK trade deal will pass Congress,” Californian spokeswoman Nancy Pelosi said in a statement on Wednesday.

“I sincerely hope that the UK government upholds the rule of law and honors the commitments it made during the Brexit negotiations, particularly with regard to the Irish border,” Neal said in a statement.

“Every political party on the island is against the return of a hard border,” he said.

The Democratic candidate, former Vice President Joseph R. Biden Jr., is a staunch defender of Ireland who said he would have voted against Brexit if he were a British citizen. One of his top foreign policy advisers, Antony Blinken, suggested in a tweet this week that Mr Biden should keep a close eye on the situation.

Mr Biden, he wrote, “is committed to maintaining hard-earned peace and stability in Northern Ireland.” He added: “As the UK and the EU work out their relationship, all agreements must protect the Good Friday Agreement and prevent the return of a hard border.”