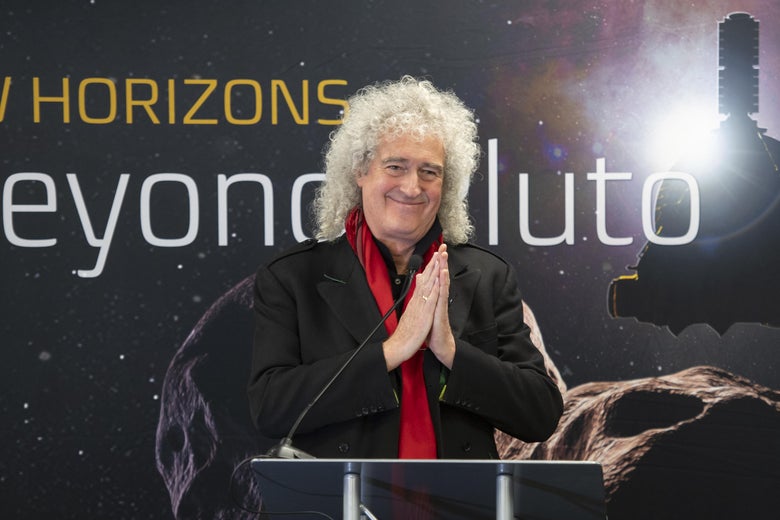 Brian May, guitarist of the band Queen, has made a new appearance these days.

As a member of NASA's New Horizons team he joined in 2015, his name appears at the bottom of the color images of a space rock called MU69 (also known as Ultima Thule), captured during one Flyby on Tuesday. It is the farthest object ever visited by a spaceship, and the earliest known relic of the early solar system, May explains on his Instagram, and it gives clues to the origin of our planetary system. "The same solar system that was born so you and I could be born!" He writes. When viewed through the eyes, May's images provide a 3D view of the object and reflect its topography.

May is something of a 3D nerd. He has an entire website about stereoscopic photography and a book titled Queen in 3-D that is filled with pictures he took with a stereoscopic camera he took with him during his time with the band wore.

He also released a single about the flyby and an accompanying music video. "This project has made music in my head, and that's what you hear," May told reporters Space.com. The Queen esque anthem is a worthy ear for a long journey, be it through space, on the road or at work. "We really taste the fruits of wishful thinking", it says in the song. "We are on new horizons, so stick to the wheel."

In May he completed a doctorate in astrophysics. 2007, after a 30-year break to pursue music. "When I was about to finish my PhD, it was just the beginning of Queen and I had to make that decision," he told Time. "My choice was made on the assumption that I was not very good at physics and maybe I'm pretty good at music." Like so many people who strive for science and art, May shows that both are not mutually exclusive.

And like every songwriter, his work includes careful word choice. The subtitle of his latest song about MU69 refers to NASA's nickname Ultima Thule (pronounced "thool-ie"). During the Roman Empire, the name referred to a cold and distant land – similar to the space rock – but was later used by the Nazis to refer to their fictional home, Meghan Bartels explains on Space.com. * She has rightly questioned NASA's term despite its racist history. Fortunately, the song itself skips the nickname, though Mai told reporters for a different reason. He could not find a suitable rhyme for it: "Do you think I would make a fool out of myself?"

Correction, January 4, 2019: This piece originally had misspelled the name of Meghan Bartels.