Chile protests: The President's apology and promises of reform can not suppress the anger 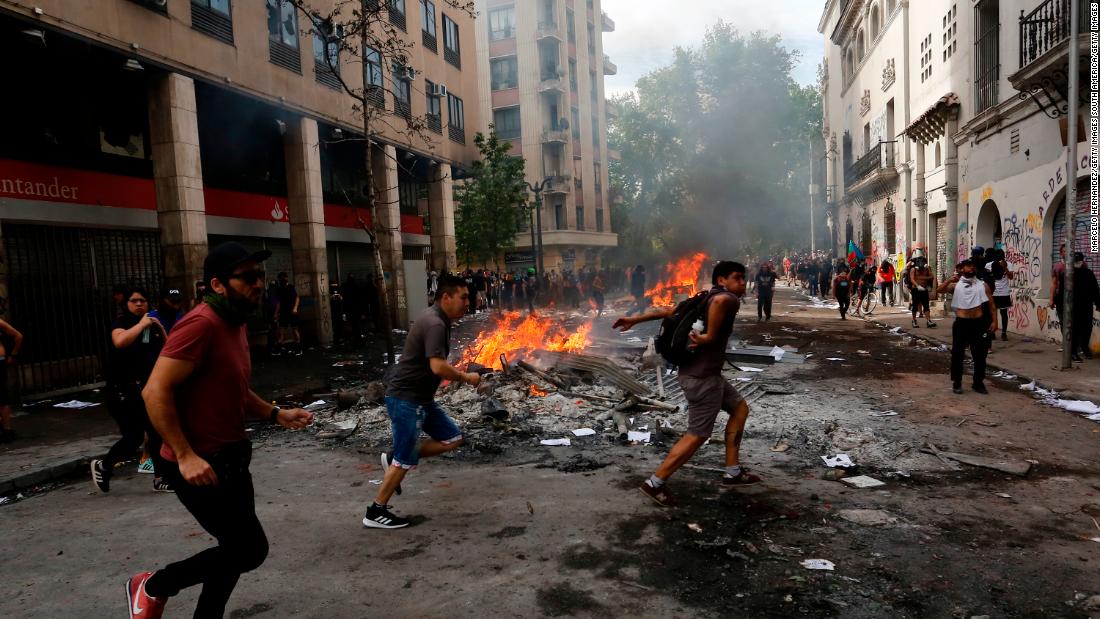 The crowd in downtown Santiago grew for a sixth consecutive day when union organizations called for a general strike. The police responded with tear gas, rubber bullets and water cannons at protesters during ongoing battles that paralyzed much of the country's largest city.

In a national televised speech, Pinera apologized on Tuesday evening for "decades" of accumulated problems and announced a new social and economic agenda following the deadly riots.

"It's true – problems have not occurred in the last few days, they've been piling up for decades," he said of the South American country of 1

But Pinera's speech has done little to calm the problem. The protests started with a now suspended price increase for subway tickets in Santiago, but have since expanded and reveal profound anger among ordinary Chileans, stemming from the economic rise of the city Nation feeling excluded.

Many are frustrated by economic inequalities, living costs and rising debt in a country that remains one of the wealthiest and most stable in Latin America. Tensions escalated on Wednesday, when a four-year-old child was killed after a person driving an unidentified vehicle rammed into a crowd in the city of San Pedro de la Paz. Another person died in the incident.

A third man was killed on Wednesday after he was attacked by the Chilean police in Santiago, Interior Minister Rodrigo Ubilla told reporters.

The three deaths increase the number of victims of the protests to 18.

In response, the government extended for the fifth year in a row a curfew for the Santiago Metropolitan Region. Classes and schools in the city are also closed until Friday.

[19659002] The curfew began at 22 o'clock local time (21.00 ET) Wednesday and ends on Thursday at 4AM (3 PM ET), "restricting citizen mobility to ensure peace and order in the region," according to a Twitter -Declaration of the Head of National Defense.

In his address, Pinera emphasized the importance of peace and told the Chileans that the government would lift the curfew when public order and peace are restored.

Although many of the demonstrators were peaceful, there was widespread vandalism. Plundering and arson of shops, shops and subway stations. The headquarters of a utility company in downtown Santiago was set on fire on Friday, and on Saturday in the port city of Valparaiso, the offices of the country's oldest newspaper, Mercurio, were set on fire, Reuters reported.

Several cities in the country were set fire to a state of emergency when thousands took to the streets. The government used the military to quell the riots – the first time since the end of the 17-year military dictatorship of General Augusto Pinochet in 1990.

Human Rights Watch has called on the government to investigate crimes committed by demonstrators and security forces who responded with excessive force.

"We are deeply concerned about the images of police brutality from Chile," said Jose Miguel Vivanco, director of America at Human Rights Watch. "President Pinera should make it clear to the Chilean security forces that they must respect human rights and ensure that abusive agents are promptly and impartially investigated."

Nearly a third of Chilean workers work in informal or fixed-term employment and one in two Chileans has low literacy skills, according to the OECD.