Climate change is having an unequal impact on global food production 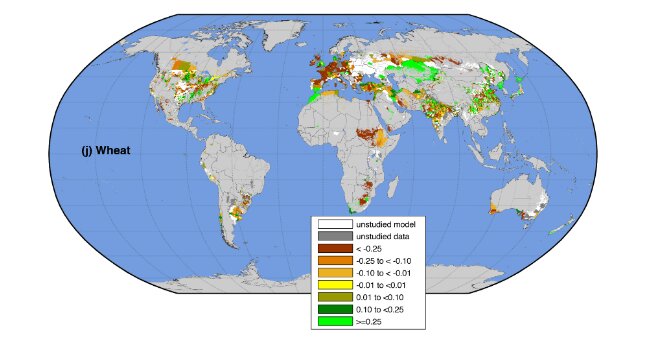 1; barley, manioc, corn, oil palm, oilseed rape, rice, sorghum, soy, sugar cane, and wheat – together provide 83 percent of all farmland-generated calories. It has long been forecasted that yields on future climatic conditions will decline. New research shows that climate change has already affected the production of these important energy sources – and some regions and countries are far worse than others.

"There are winners and losers, and some countries where food security is no longer guaranteed are proving to be worse," says lead author Deepak Ray of the University of Minnesota's Institute on the Environment, whose high-resolution global newspaper Harvest statistics databases were also used to determine how global crop production is changing over time. These results show which geographical areas and cultures are most at risk and make them relevant to those who wish to achieve U.N. Sustainable Development Goals to end hunger and limit the effects of climate change. Such insights lead to new questions and decisive next steps.

"This is a very complex system, so a careful statistical and data modeling component is crucial to understanding the dependencies and cascade effects of small or large changes," says co-author Snigdhansu Chatterjee of the University of School's School of Statistics Minnesota.

The Institute's Global Landscapes Initiative, which included contributors Ray, Paul West and James Gerber, has previously presented global insights used by international organizations such as the United Nations, the World Bank and Brookings in assessing global challenges in terms of food security and the environment. The scientists say that this report has implications for large food companies, commodity traders and the countries where they operate, as well as for citizens worldwide.

"The research documents how changes are already taking place, not just in a future time." says Ray.

Quote :
Climate change is already having an uneven impact on global food production (2019, 31 May)
retrieved on June 1, 2019
from https://phys.org/news/2019-05-climate-affecting-global-food-productionunequally.html