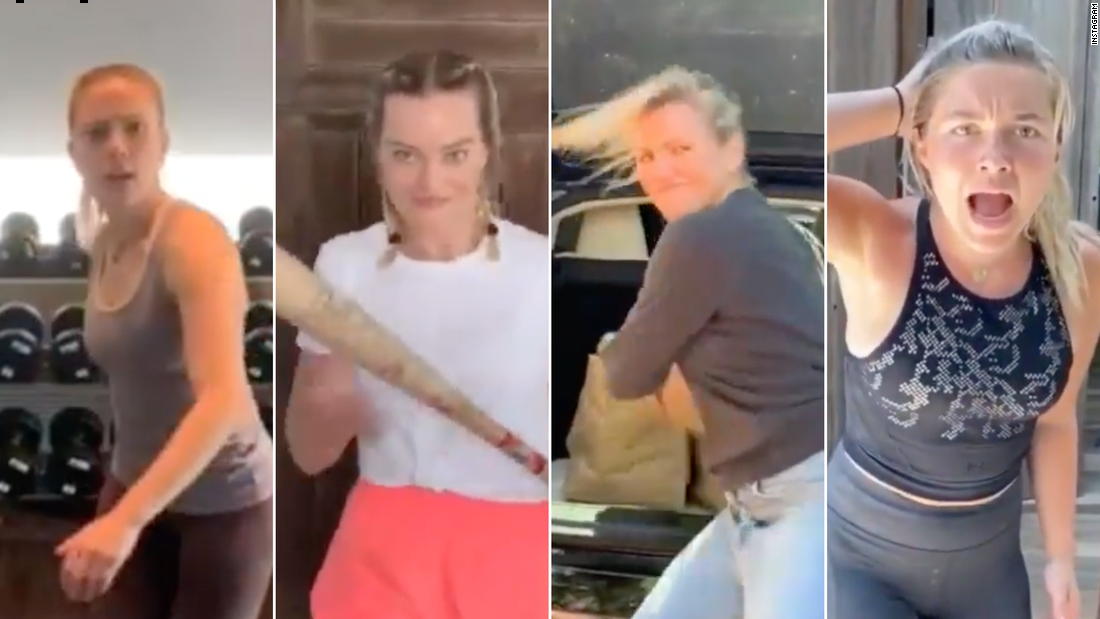 The action-packed video with clips from the respective houses of the actresses begins with Bell sitting and reading on her sofa. Then she throws her book away and exclaims: “I’m so bored. I just want to play with my friends.”

The New Zealander, who became known for her stunt work in “Xena: Warrior Princess” and “Kill Bill”, approaches the camera and appears to be stepping on the screen.

Their actions triggered a number of incredible changes in the video released on Saturday. Celebrities performed their best stunts in five minutes of adrenaline fun.

The next shot is Lucy Lawless, who responds to Bell̵

7;s blow with her legendary blade “Xena, Warrior Princess”.
Highlights of the clip include “Black Widow” star Johansson, who uses a medicine ball as her weapon of choice, “Little Women” actress Pugh, who refuses to waste precious wine by tossing a bottle, and Robbie, who channeled her inner “Harley Quinn” with a baseball bat to the screen.

The camera transitions are so seamless that viewers are forgiven for having the women together on a film set.

The “boss-bitch-fight-challenge”, which follows in the footsteps of a stuntmen video by students of the Campus Univers Cascades in Le Cateau-Cambrésis, northern France, has already received more than a million views on YouTube.

Bell is the latest celebrity to use her social media platforms to entertain fans and smile in the midst of the pandemic.

From Jack Black, who performs his dance moves on TikTok, to actor Gal Gadot and her celebrity friends, who record an uplifting version of John Lennon’s song “Imagine”, celebrities have found creative ways to spread some joy.