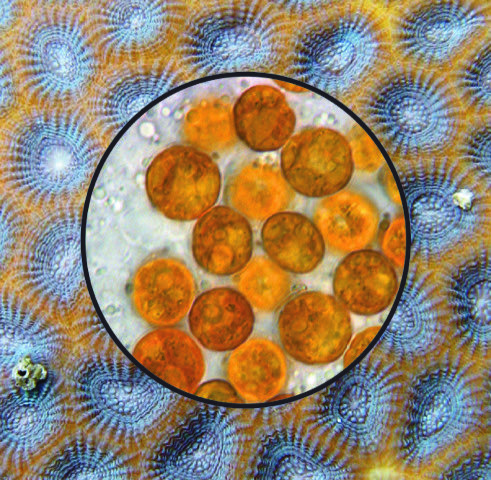 Algae and coral have leaned against each other since dinosaurs roamed the earth, much longer than previously thought, according to a new study by scientists at Oregon State University and Penn State.

The findings published today in Current Biology are an important step forward in understanding coral reefs, the largest and most important structures of biological origin.

Reefs are less than 1 percent of the ocean, but home to nearly a quarter of all known marine species. They also help regulate the carbon dioxide content of the ocean and are an important hunting ground that scientists use to find new medicines.

Corals consist of interconnected animal hosts, so-called polyps, in whose interior microscopic algae, called zooxanthellae, occur in cells. The coral-algae symbiosis or partnership is the foundation of the entire coral reef ecosystem; the polyps receive food from the algae, and the polyps in turn provide nutrients and protection for the algae.

This symbiosis goes back some 160 million years – about 100 million years longer than scientists had assumed – according to an international research collaboration between John Parkinson of Oregon State and Todd LaJeunesse of Penn State. It is also more diverse than had been supposed.

"At present, numerous algal lines that call themselves" clans "are grouped into only one genus," said Parkinson, a postdoctoral fellow at the OSU College of Science. "We provide evidence that the family is actually composed of at least 15 genera, comprising hundreds and possibly thousands of species worldwide."

The differences are important, he said, because some symbionts are more resistant to environmental changes than others.

Many corals whiten or lose their algae when exposed to higher than normal sea temperatures. Others, on the other hand, are much more tolerant of heat, and part of that resistance depends on the species of algae.

In general, corals bleach about 4.5 times as often as in 1980, with strong bleaching events now occurring every six years of 25 or 30 years.

"The updated naming scheme we have developed provides a clear framework for identifying different symbionts," he said. "Accurate taxonomy is a critical step in any biological research, especially for studies that seek to understand how reef corals and their microalgae can adapt to climate change."

"In all these millions of years, partnerships have taken big hurdles and managed to jump back," said LaJeunesse. "The fossil record shows that today's reef-building corals, such as algae, originated about 160 million years ago, and the finding that the origin of the symbionts is similar to that of their hosts implies that partnership was one of the main reasons for diversification and success of modern corals. "

LaJeunesse, Parkinson, and several other researchers used genetic sequencing and other techniques to recalibrate the molecular clock of algae.

Parkinson noted that the team has been working for nearly a decade on the modernization of coral symbiont systematics and taxonomy – Identifying and naming species to improve communication among scientists and facilitate further study.

"So far, much has been tried about these algae to compare apples to apples, but we now know that we often compare apples to oranges as divergent to some of these species," he said. "Our work will help researchers to think more objectively about comparisons they make in experiments."

Further information:
The combination of light and temperature of course regulates the algae abundance