Corona virus outbreak at U.S. bases in Japan leads to a troubled relationship 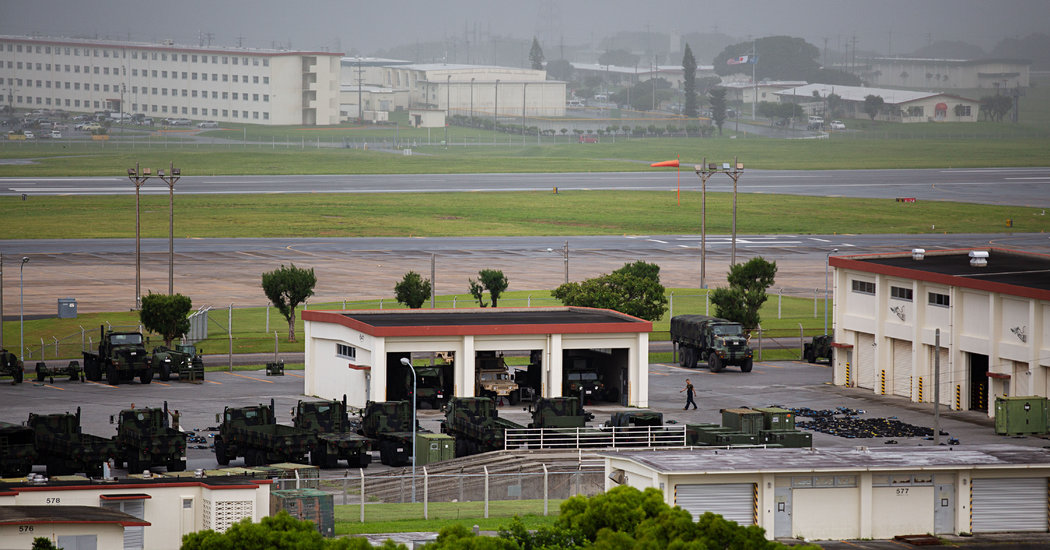 TOKYO – An outbreak of coronavirus cases on U.S. military bases in Okinawa, Japan, has alarmed the island’s local population, which at times conflicted with the Americans stationed there and otherwise successfully restricted Covid-19.

The U.S. Marine Corps, which has approximately 20,000 soldiers stationed on the island, reported 94 confirmed cases to the prefectural government and said it had taken stringent measures in all 33 facilities in the region.

Denny Tamaki, the governor of Okinawa, said he was shocked by the number of infections and that it was “extremely unfortunate”

; that so many cases had occurred among American troops and associated personnel in less than a week. Except for the American cases, Okinawa has registered only 148 infections since February.

Mr. Tamaki added that he had “strong doubts” about the preventive measures reported by the United States.

Japan, which has been relatively successful in containing the virus, has also seen an increase in new cases in Tokyo, where the state of emergency was lifted in late May. Tokyo reported two consecutive days of daily record infections last week, with a large number of cases occurring in people in their twenties and thirties who had worked or visited venues in the nightlife district of Tokyo.

The U.S. military in South Korea announced Monday that 11 troops had tested positive on arrival from the U.S. The American military is struggling with outbreaks among its troops, with a large number of infections in March on the Theodore Roosevelt aircraft carrier.

In contrast, the Japanese military reported only 14 cases among its defense forces that are believed to have contracted the virus in their communities rather than during their deployment.

The Okinawa cases put a new strain on the relationship between the military and the local government, where the presence of American bases was a constant source of friction until the end of World War II. Citizens have long complained about noise, crime, and plane accidents, and have repeatedly questioned why almost half of the 55,000 American troops in Japan – including personnel from all military branches – are stationed on Okinawa.

One of the bases where a number of recent coronavirus cases have been registered, Marine Corps Air Station Futenma, is the subject of a controversial plan to relocate operations from central Okinawa to a less populous coastal area where construction is currently underway become.

The Japanese central government views the bases as essential to the country’s security, and many Okinawa citizens and businesses welcome the troops as customers and neighbors.

When news of infections came from the bases, both the Governor and the Okinawa Prefectural Assembly requested further information from the Marine Corps about the number of cases that alarmed officials and residents of Okinawan, who were feared of unwittingly contacting infected troops be .

“When this happens, when the military doesn’t provide essential information about how many people are infected or where they come from or where they were out of the base, the people of Okinawa are really scared, frustrated, and disappointed,” he said to Manabu Sato, professor of political science at Okinawa International University, looking towards Marine Corps Air Station Futenma.

“I’m scared,” said Tomonari Kiyuna, retired Workers in a noodle shop in Chatan, a neighborhood in Okinawa frequented by American soldiers. “We are very careful, wear masks, wash hands and disinfect,” said Mr. Kiyuna. “I want them to disclose the information. They are American, but they stay in Okinawa, Japan. Okinawans or the Japanese people have the right to get information about infections that come from the bases.

Prime Minister Shinzo Abe’s chief cabinet secretary Yoshihide Suga said in a press conference that the government had “received the necessary information from the United States, such as the number of infected employees and facilities affected”.

Governor Tamaki said he was concerned that the soldiers had spread infections during the July 4th celebrations. “There is information that US forces personnel went to the nightlife district on July 4th and hosted beach parties outside the bases,” Tamaki said in a statement on Saturday. He urged the military to stop transferring new troops from the United States, where the number of cases is increasing.

In accordance with the measures initiated over the weekend, all American troops and families on Okinawa are prohibited from leaving the base without the consent of the commanders. You cannot visit restaurants, take away, travel by public transport, use childcare facilities, or train outside of the base. Futenma and Camp Hansen, where most cases have been reported, are actually closed, American officials said.

Across Japan, all US troops and families arriving must be quarantined for 14 days, said Colonel Robert A. Firman, director of public affairs for the U.S. Armed Forces in Japan.

“This measure will continue for the foreseeable future,” said Colonel Firman. “It is also at the discretion of the installation commanders to increase the protection measures based on local conditions, and we see that in Okinawa.”

Colonel Firman said that military personnel in most base facilities also have to wear masks, use social distancing, and limit the size of assemblies. Major Kenneth Kunze, a spokesman for the Okinawa Marines, said: “Thorough contact tracking is currently underway to identify and isolate those who may have come into contact with infected personnel. Anyone who has contact with an infected or suspected infected person on or off the base will be notified. “

One of Okinawa’s largest hospitals, Chubu Hospital, has offered free trials to anyone who fears they have been exposed to the virus. So far, the hospital has tested 130 people since the news of the base outbreaks.

In a Facebook post, Yoshihiro Takayama, a doctor at the Chubu Hospital’s Infectious Diseases and Public Health Department, warned against blaming the military for the spread of the virus.

“People tend to misunderstand that US service personnel have spread the virus because many cases have been found among them, ”wrote Dr. Takayama. “But I do not think. They are believed to have been infected on July 4, as of the confirmed date. However, it is not yet known who infected them because epidemiological information is not shared. They may have been infected through contact with Japanese residents or service personnel. It is believed that there are multiple routes, but we shouldn’t have any prejudices. “

He added that people “visited many bars, danced shoulder to shoulder in groups, and shared wine bottles,” including both US military personnel and local residents.

In Chatan, where there are many bars frequented by the Americans, companies noticed a downturn when the basic closures came into effect. “We saw a huge drop in customers yesterday, especially Americans,” said Itaru Maeshiro, owner of the Transit Cafe, which has about a third of its regular customers as American military personnel.

In a sushi shop in Chatan, chef Kazuya Kaneshi said that the strict blocking measures were difficult for the business. “But we don’t want infections at the same time,” he said. “If infections spread across Okinawa, it will be a big problem.”

Hisako Ueno contributed to the reporting.