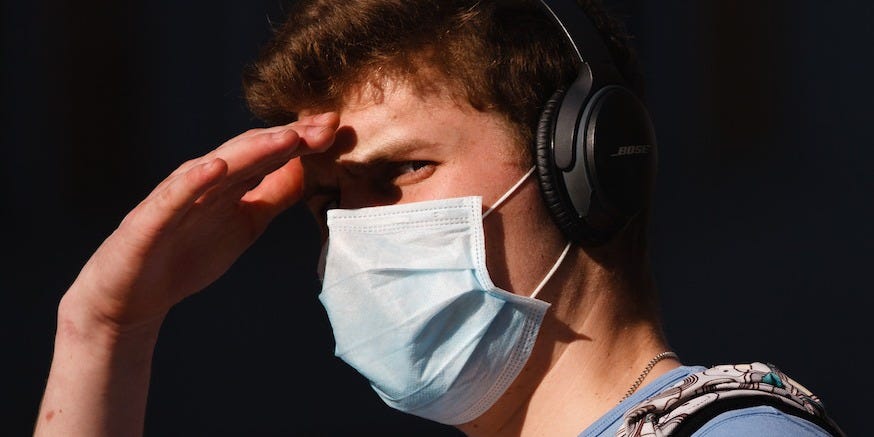 According to a large new British study that found that the antibodies peaked three weeks after the symptoms appeared before gradually disappearing, many patients’ immunity to the coronavirus can disappear within months.

In some patients, no antibodies were detected after a few months, which put the hopes of a viable, long-lasting vaccine in question.

The study, conducted by scientists at King’s College London and reported by The Guardian newspaper, “puts another nail in the coffin of the dangerous concept of herd immunity, according to one of its authors.”

Based on the antibody responses from 90 patients and health workers from the Guy and St. Thomas NHS Foundation, it was found that 60% of the patients tested had “potent” antibodies in the fight against COVID-19, but only 17% had the same for three months Later showed potency.

Antibody efficacy decreased 23-fold in the three months, the study found, and in some cases was undetectable at the end of this period.

The study, which has not yet been reviewed by experts, found that antibodies were more effective and lasted longer in patients with the most severe cases of the COVID-19 virus.

However, the results suggest that even if they developed antibodies during their first infection, people can be reinfected like a cold by the coronavirus.

It is the latest study that pours cold water on so-called herd immunity – the theory that a population becomes immune to the virus once when at least 60% of people catch it.

Two of the authors of the Spanish study, Isabella Eckerle and Benjamin Meyer, said: “Given these results, any proposed approach to achieve herd immunity from natural infections is not only highly unethical but also unattainable.”

The authors of the new British report came to similar results.

One of the other authors of the British study, Professor Stuart Neil, said the study showed that any immunity generated “does not last very long.”

He said: “One thing we know about these coronaviruses is that people can get infected again quite often.

“That has to mean that the protective immunity that humans create doesn’t last very long.

“It looks like Sars-Cov-2, the virus that causes Covid-19, could also fall into this pattern.”

The study “puts another nail in the coffin of the dangerous concept of herd immunity,” said Professor Jonathan Heeney, a virologist at the University of Cambridge, and warned that deliberate attempts are being made to infect the risk of serious damage to health in the name of herd immunity the future.

“I cannot underline how important it is that the public understands that it is not a good thing to get infected with this virus. Some of the public, especially the youth, have become a bit carefree when they become infected because they believe that they would contribute to herd immunity. “he said.

“They don’t just put themselves and others at risk by becoming infected and losing immunity. They can even put themselves at higher risk for more serious lung diseases if they become infected again in the coming years.”

However, Professor Arne Akbar, an immunologist at UCL, told the Guardian that T cells made to fight the common cold could complement the protection provided by antibodies, which means that immunity may persist longer than the study suggests.

The results suggest that one vaccine is not enough

Dr. Katie Doores of King’s College London, the lead author of the British study, said the results could be a sign that any future coronavirus vaccine will need to be provided on a regular basis so that people can maintain their immunity.

“People produce a reasonable antibody response to the virus, but it disappears over a short period of time, and depending on how high your peak is, this determines how long the antibodies stay close,” she said.

“Infection is usually the best scenario for an antibody response, so if your infection leads to antibody levels that decrease in two to three months, the vaccine may do the same.”

“People may need to be strengthened and one shot may not be enough.”

In an interview with Sky News reported by The Guardian, Professor Robin Shattock of Imperial College London said that re-infection is likely to be “less serious” because people retain “immune memory”, the risk of passing the virus on , however, this would likely require regular boosts to the vaccine.

“Ultimately, this may require the use of annual boosting vaccinations, especially for the most vulnerable. This could be combined with annual influenza vaccinations,” he said.

Prime Minister Boris Johnson’s British government initially refused to pursue a strategy of herd immunity before being warned that this would result in the deaths of hundreds of thousands of people.

An Italian health minister claimed last month that Johnson had announced his intent to pursue herd immunity in a phone call to Italian Prime Minister Giuseppe Conti on March 13, just over a week before Britain entered a nationwide ban.

On the same day, Patrick Vallance, the UK government’s chief scientific advisor, said he believed Britain would be able to achieve herd immunity.