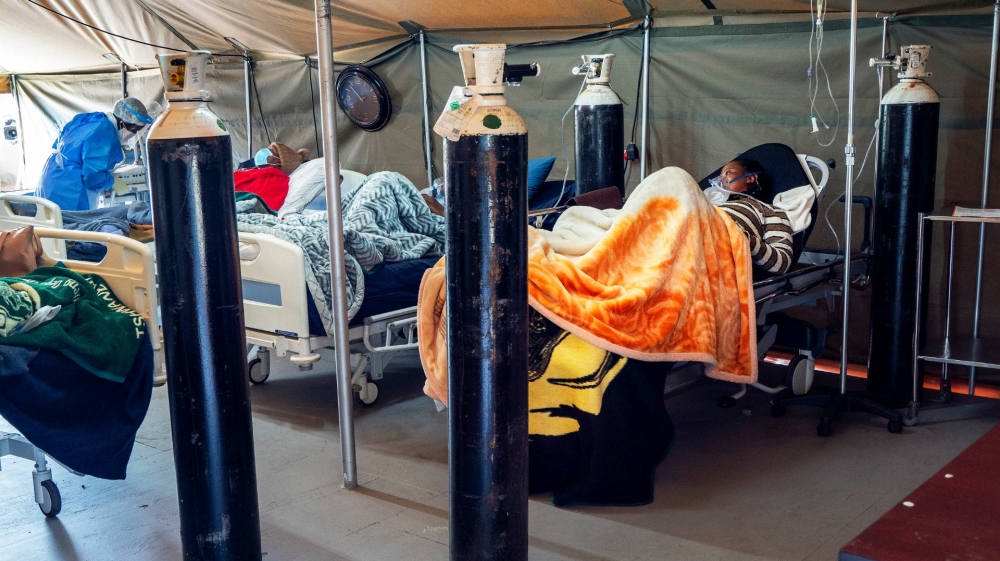 Here are the latest updates.

Denny Tamaki, the governor of the Japanese island of Okinawa, has demanded stricter preventive measures and greater transparency from a leading U.S. military commander after telling officials that more than 60 Marines have been infected at two bases in the past few days, the AP news agency reported on Sunday.

Okinawa officials reported a total of 61 cases on Sunday – 38 at Marine Corps Air Station Futenma, which is at the center of a relocation dispute, and another 23 at Camp Hansen – since July 7. They said US military officials told them the two bases have now been closed.

The exact figures were released after Okinawa’s repeated requests to the US military.

“Okinawans are shocked by what we have been told (by the US military),” Tamaki said at a press conference on Saturday. “We now have strong doubts that the US military has taken appropriate disease prevention measures.”

The number of New Yorkers hospitalized with the coronavirus has dropped to its lowest level in almost four months.

However, Governor of New York Andrew Cuomo is concerned that a resurgence in cases of outbreaks in other states is inevitable.

Cuomo had previously told WAMC radio that the state’s quarantine rules are difficult to enforce for travelers returning from hard-hit areas. He says the only question is how high the rate will go in New York.

Organizers and community workers cover the burned remains of Mexicans who died of COVID-19 before a Saturday service at St. Patrick’s Cathedral in New York [Eduardo Munoz Alvarez/AP]

The Greek authorities have announced 41 new cases of coronavirus in the past 24 hours, 11 of which have been found among incoming tourists. There were no new confirmed deaths.

The number of confirmed coronavirus cases is 3,772 and 193 deaths.

According to the Yonhap news agency, new virus cases in South Korea recovered on Sunday as cluster infections continued to increase in the Seoul metropolitan area and in the southwestern city of Gwangju.

The country added 44 cases, including 21 local infections, and increased the total number of cases to 13,417, Yonhap cited the Korea Centers for Disease Control and Prevention (KCDC).

The balance marked an increase in 35 new virus cases reported on Saturday, but a slight decrease compared to 45 on Friday.

The country also reported another death, bringing the death toll to 289.

Mourners, many with masks, gather in front of Seoul City Hall on Saturday to pay tribute to the late Mayor’s Park of Seoul, which was soon won amid the proliferation of the corona virus in the city [Ahn Young-joon/AP]

The authorities canceled less than 24 hours before the kick-off on Saturday of one of the largest soccer derbies in southern Brazil after 14 members of a site tested positive for COVID-19, Reuters reported on Sunday.

The State Championship of Santa Catarina resumed on July 8 with four games, including Chapecoense’s 2-0 home win over Avai.

The second leg was due to start on Sunday, but was canceled by order of the state health secretariat.

The state of Santa Catarina has registered 42,026 cases of the new corona virus with 485 deaths. To date, 71,469 people have died in Brazil, more than in any other country outside the United States.

Italy has confirmed another 188 coronavirus infections, a third in the hard-hit Lombardy region, the AP news agency said.

Public health officials say the outbreak in Italy, once the epicenter of the outbreak in Europe, remains under control, but they are watching out for clusters of national and international infections.

Italy stopped all air traffic to Bangladesh and 13 other countries after more than two dozen cases involving charter flights by returning immigrants from Bangladesh. On Saturday, eight of the 19 new infections in the Lazio region around Rome were linked to the Bangladeshi community cluster.

Another seven people with the coronavirus died on the previous day, increasing Italy’s total number of confirmed deaths to 34,945.

Members of the Bangladeshi immigrant community queue up in front of a health center in Rome on Thursday to undergo swabs to test for COVID-19 [File: Mauro Scrobogna/LaPresse via AP]

The Mexican Department of Health has reported 6,094 new confirmed coronavirus infections and 539 additional deaths, totaling 295,268 cases and 34,730 deaths in the country.

According to the Reuters news agency, the actual number of people infected is likely to be significantly higher than the confirmed cases, according to the government.

00:30 GMT – Indian tribes are struggling with coronavirus deaths and infections

The Indian tribe’s death toll rose to 396 as tribal officials reported 56 more confirmed cases, increasing the total number of the reserve to nearly 8,100. The number of infections is believed to be far higher since many people have not been tested. Studies suggest that people can become infected with the virus without feeling sick.

The block began on Friday evening and ends on Monday at 5 a.m. All Navajo Nation companies must also close during the closure.

00:10 GMT – US corona virus deaths have been worsening for a long time

According to data on the pandemic, a long-awaited rise in coronavirus deaths in the US has started, due to deaths in southern and western states.

According to an Associated Press analysis of data from Johns Hopkins University, the 7-day moving average for daily reported deaths in the U.S. rose from 578 two weeks ago to 664 on July 10.

Daily reported deaths increased in 27 states during this period, but the majority of these states have fewer than 15 new deaths per day on average. A smaller group of states has driven the nationwide increase in deaths.

An average of 91 deaths per day were reported in California, while Texas was just behind with 66. However, there have also been significant increases in Florida, Arizona, Illinois, New Jersey and South Carolina. The recent jump in New Jersey is believed to be due in part to the less frequent reporting of likely deaths.

“It is increasing. And it is increasing when you would expect it to,” said William Hanage, an infectious disease researcher at Harvard University.

South Africa reports a further 13,497 confirmed coronavirus cases with a total of 264,184 cases, including 3,971 deaths. More than a third of the cases are at the new hot spot in Gauteng Province, which includes Johannesburg and the capital Pretoria.

Public hospitals are already voicing concerns about the lack of available beds and medical oxygen. The percentage of positive tests is now over 25 percent. However, the National Institute of Infectious Diseases states that this could reflect both the increase in infections and more targeted testing.

The country’s health minister said the “storm” that the authorities had warned citizens about had arrived.

All important developments from yesterday July 11th can be found here.