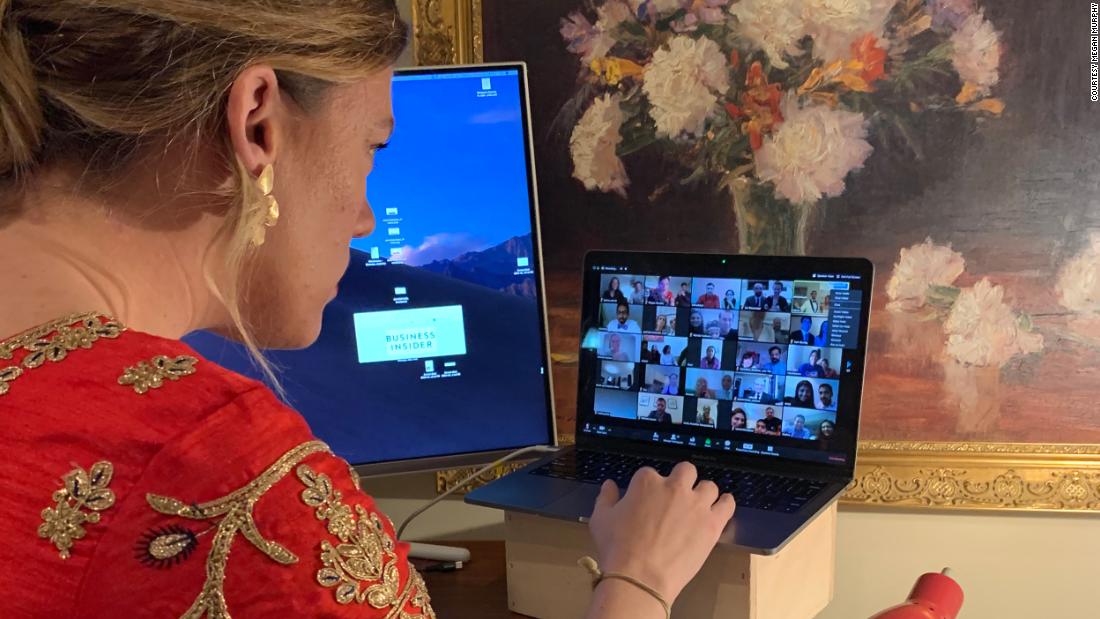 When the Atlanta-based Elsie Brotherton and Bree Beal married at the weekend, their 140 guests gathered to watch their wedding ceremony despite the coronavirus threat. But their guests did not clap or cheer as usual. Instead, they responded with thumbs up, hearts and emojis with smileys.

The couple decided to exchange vows in a neighbor’s backyard on Facebook’s live stream. More than 700 people attended the ceremony.

“It feels great to be newly married right now. In fact, at a time when there is usually a lot of uncertainty in the world, it has made us feel safe,” Brotherton told CNN.

The venue, decoration and wedding dress were ready. They planned to have dinner in their favorite restaurant for the reception. As governments tried to curb the spread of the virus by closing restaurants, ordering locks, and enforcing orders to stay at home, they opted for alternative plans.

“In the end, we ordered food at the restaurant we originally wanted to eat in. Not only is it delicious, but we also wanted to support a local company that was having trouble shutting down Covid-1

34-year-old Brotherton is a small business owner with four yoga studios in Atlanta and had to change her business online.

“It was an extremely stressful couple of weeks for me and it was a blessing to be able to pause for a few hours on my wedding night and get in touch with all of our friends around the world online. It felt like I could breathe for the first time since it went crazy, “she said.

The couple asked all “guests” who were watching online to take a selfie of theirs that was raised with the hashtag #loveinthetimeofcoronavirus. They received more than 100 selfies.

The show must go on

The big question that engaged couples are asking is whether or not to have wedding plans in the coming weeks and months. Almost a third of the world’s population, 2.5 billion people, is restricted from movement related to the corona virus. With more than 500,000 cases worldwide and more than 101,000 in the United States alone, large gatherings have been severely disrupted.

Canadian couple Celena Peters and Josh Whiteman had family and friends who had traveled from all over Canada to attend their wedding in Alberta. Since some guests were at high risk for Covid-19, the couple’s pastor mentioned live streaming as an option so guests could continue to join them.

Almost 40 guests attended the couple’s livestream wedding on Zoom. Some even dressed to see it from home. Others were in sweatpants and ate snacks.

While the bride and groom are looking for workarounds, they spend their days requesting refunds and asking for credits.

“It is a relief that it is over and we no longer have to worry about the constant updates and implications for our planned wedding. That was the worst – we didn’t know what was going to happen,” Whiteman told CNN.

Many couples rely more than ever on friends and family. Sarah Marchese and Varun Khedekar from Sarasota, Florida said their friend surprised them with the idea of ​​broadcasting their reception live last weekend. More than 40 of their guests attended the zoom meeting.

“She created a Spotify music playlist that we can play at the virtual reception,” said the couple. “We had no idea that so many of our friends and family members would sign up for Zoom and celebrate with us virtually. The best thing was that some of our guests were still dressed in suits and dresses despite their home was a wonderful surprise!”

Megan Murphy, the friend who hosted the live stream, said it was “the best night of its own.”

“The callers interfered with congratulations and love messages, both by voice and in the chat function, and we all howled and roared when they kissed on camera,” she recalled.

Drew Piers, a guest at a friend’s live stream wedding on YouTube in Tallahassee, Florida, said he had “wheezed” when the bride first walked down the aisle.

At the end of the ceremony, Piers’ wife made the situation clear, attended the wedding with her, and reported to the bridesmaid.

“She grabbed a small potted plant that we had in the house and went to music through our house because she couldn’t personally follow the bride and groom. We then sent the video to them to laugh even more.” Piers said.

For some couples it is a “painful decision”. Trish Barillas and Charlie Sandlan have spent over a year and a half planning their Guatemalan wedding. As the outbreak escalated, the couple worried about friends and family members who had traveled from the United States.

“We originally had 67 Americans flying down to the wedding and 120 Guatemalans present. The week before the wedding, we lost 42 American guests, including the maid of honor, when our friends were forced to make painful decisions about what was best themselves and their families, “said the couple.

The couple decided to broadcast the Guatemala wedding on Instagram for those who couldn’t attend.

“We wanted to offer them something that included love and optimism. Although we never saw our car, the ceremony or the reception, we were surrounded by tremendous love and support,” the couple told CNN.

Houses of God deal with calls to close or limit the number of people allowed to enter their congregations.

Danica Vella and Ian Attard from Malta decided to broadcast their church wedding live on Facebook just when the country imposed a partial ban.

“The strangest part of everything … going to all these empty places … and the empty church even though our parents and siblings are there … but knowing that there is a good reason for the health of all of us to ensure, “said the couple wrote.