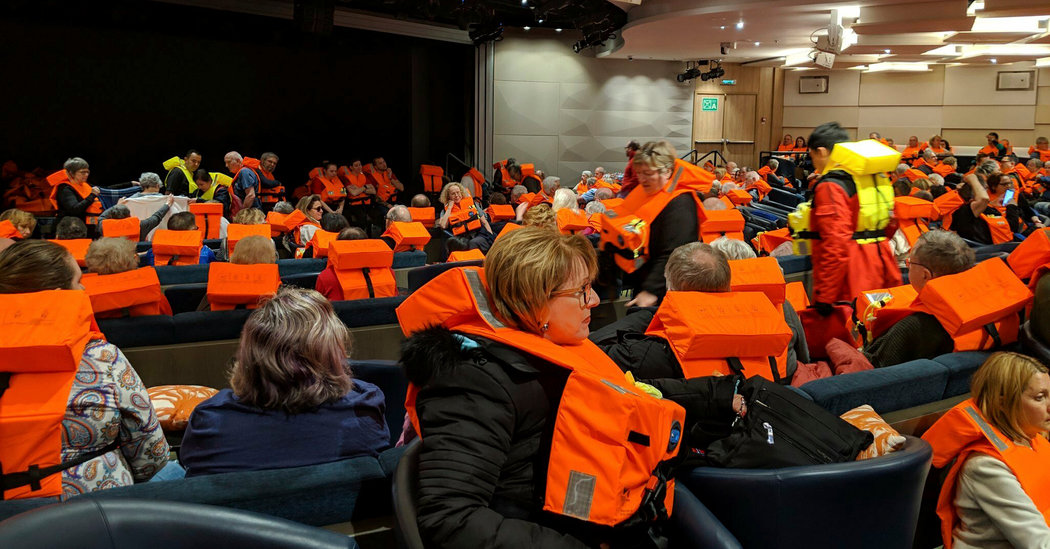 LONDON – A cruise liner that boarded over 1,300 people reached the Norwegian shore on Sunday after being stranded at sea for almost 24 hours with engine malfunctions.

Over 890 passengers – 436 passengers and 458 crew members were left behind on the 47,800-ton Viking Sky ship when it returned to Molde, a coastal town in western Norway, after some of the engines were restarted. On Sunday at about 16:30 clock. Local time, after about six hours of sea voyage with one tug in front and another in the stern, the ship docked.

On footage shared on Twitter cheers and whoops were heard from the land.

"It has reached Molde; Everything was going according to plan, "said Einar Knudsen, a spokesman for the Southern Rescue Coordinating Office for the rescue operations, calling on Sunday.

Before the ship managed to limp into the harbor, the rescue workers had to do it in inclement weather a shocking operation to evacuate hundreds of people by helicopter.

Some of the airlift passengers arrived squeezed and battered ashore, the Red Cross said. Passengers reported to NBC News that many people were falling through Objects and broken glass had been injured as the waves shook the ship.

"Nothing similar has happened so far, not on this scale," Knudsen said. Many of them were elderly and came from countries like Australia, Britain, Canada, New Zealand and the United States.

The ship was scheduled to arrive in Tilbury on Tuesday the Thames arrive in southeast England. When the ship sailed between two Norwegian ports, Tromso and Stavanger, an alarm was sounded on Saturday afternoon that several engines had failed.

It was not immediately clear what had caused the ship to lose power. According to Eirik Walle, a Southern Rescue Center coordinator, this was the case along a particularly dangerous part of the Norwegian coast called Hustadvika.

The rescue operation involved five helicopters and several other ships. (According to local reports, two helicopters also helped a cargo ship on Saturday, the Hagland captain, who was in Norwegian waters when he sent out an SOS message stating that he had "engine problems." The crew members were evacuated.) [19659012] Rough weather – strong winds and 26-foot waves – hampered the evacuation of Viking Sky's passengers, which began at 2pm local time on Saturday.

"We are now aware that 20 people have been injured by this incident," said a spokesperson for Viking Cruises, who runs the ship, by e-mail. He added that they were all receiving medical treatment in Norway and some had already been released.

The Red Cross said in a statement Sunday that several of the rescued passengers had suffered cuts or broken bones. "Many are also traumatized by the experience and need to be cared for at the landing," said the organization.

Video material that cruise ship passengers shared on social media showed a terrible ordeal as the ship swayed. People, plants and furniture pushed across the floor. Other shots showed hundreds strapped into fluorescent lifejackets as water streamed past their feet inside the ship.

"The ship is rocking and rolling, but at anchor," passenger Alexus Sheppard said Saturday the New York Times. "Everyone is calm except when we are being rolled by a big wave," she said.

Others praised the crew members of the ship, who gave the passengers water and sandwiches.

A couple, Allen and Susan Dollberg from Novato, California, talked about their experiences on Sunday in front of the Norwegian state broadcaster NRK.

"At first we took it easy," Dollberg said. "We thought we could make it through the water." But he added, "Then suddenly the alarms we needed to evacuate the ship suddenly sounded."

Dollberg said, "We looked at each other and said," That really happens. "Everything broke, furniture, glassware," she said. "The cabinet doors rattled back and forth." She added, "When we got the signal for the evacuation, there was no time to think about important things like passports . "

The operation seemed to be under control on Sunday the challenging weather with strong currents, strong wind and high waves.

Mr. Knudsen said the day before that the ship had been turned from west to east with the help of two tugs and three of its four engines had been restarted

The cause of the ship's engine failure was unknown, as Torstein Hagen, the Norwegian founder and chairman of Viking Cruises, headquartered in Switzerland, reports on Sunday via local news agencies.

He said the passengers would be compensated. "They will get their money back," he said, adding, "They will also receive a letter from me and be invited back."

Mr. Hagen told the VG Sunday newspaper: "What happened today is one of the worst I've ever experienced. But as it seems that everything will turn out well, I have to say that we were lucky. We continue to do the best we can. "

In a Sunday statement, Viking Cruises said:" The 479 passengers that were transported by ship are currently ashore and provision has been made to fly them home with the first passengers to leave home today.

It was also announced that the company's next sailing trip, scheduled for March 27, had been canceled. "Guests and their travel agents were contacted directly. At this time, we do not expect any additional cancellations, "said the statement.

The Viking Sky will remain for a public investigation of the events in the port in Molde, said the spokesman of the rescue operation, Mr. Knudsen.

The cruise industry has in the suffered a series of disasters over the past decade, including the sinking of the Costa Concordia in 2012 and the deadly Norman Atlantic fire in 2014, as well as setbacks such as outbreaks of disease and on-board drug raids