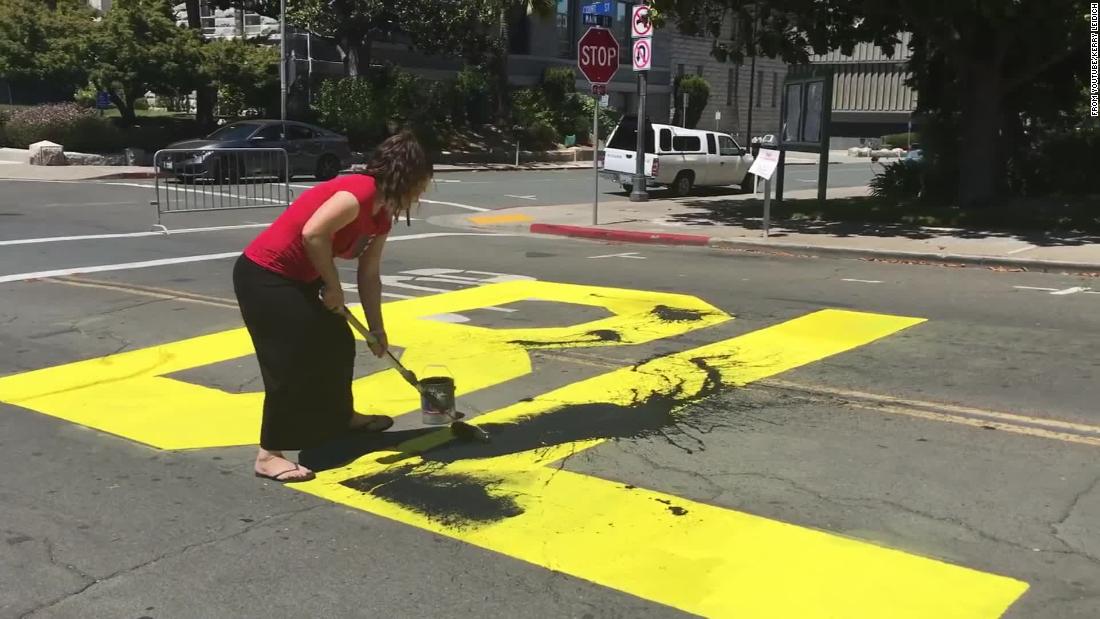 David Nelson and Nicole Anderson are each charged with three crimes, including violations of civil rights, vandalism, and possession of vandalism or graffiti tools, the prosecutor said in a statement. The incident occurred shortly after the mural was painted on July 4th in front of the Martinez, California courthouse.

“We need to address the root and byproduct of systemic racism in our country. The Black Lives Matter movement is an important civil rights issue that deserves our full attention,” District Attorney Diana Becton said in a statement.

“The mural that was completed last weekend was a peaceful and powerful way to communicate the meaning of black life in Contra Costa County and in the country,”

; she said. “We need to further intensify the discussions and actually listen to each other to heal our community and our country.”

When Nelson, 53, was contacted by CNN on the phone, he said, “I have no comment – for you anyway.” CNN’s attempts to reach Anderson, 42, remained unanswered Tuesday evening.

A woman wearing a red t-shirt and flip-flops began painting the yellow-labeled mural with black paint on Saturday, as seen in a video posted on YouTube that was released in a police statement. A man in a red Trump shirt labeled “Four Years Left” started filming when the woman started painting.

“We are fed up with this story, that’s wrong,” said the man in the video. “The story of police brutality, the story of oppression, the story of racism, it’s a lie.”

You can hear a spectator arguing outside the camera with the man. She asked what was wrong with him before adding, “This is racist what you do.”

Martinez residents were given permission by the city to paint a mural of Black Lives Matter on July 4, Martinez chief of police Manjit Sappal said in a statement.

The police had searched for the man and woman seen in the video.

“It appeared that the couple came to the mural with paint cans and a roller to destroy the mural,” said Sappal in the statement. “The community has spent a lot of time painting this mural just so that the suspects can destroy it by dousing and rolling over part of the message.”

During the incident, the woman stopped painting to express her concern and suggested that such murals be kept in New York. “It doesn’t happen in my city,” she said.

The mural was repainted after the incident, according to CNN member KPIX. The area was cordoned off and the mural was surrounded by chalk paintings from Sunday afternoon, KPIX reported.
In an unrelated incident on Sunday, a man was arrested for shouting “All life is important” and putting a gun on a young man who viewed the same mural from Black Lives Matter, the CNN subsidiary KGO said.

Nelson and Anderson are notified to appear in court. This date has not yet been released, according to DA spokesman Scott Alonso. If each defendant is convicted of an offense, the press release could end up in a district prison for up to a year.