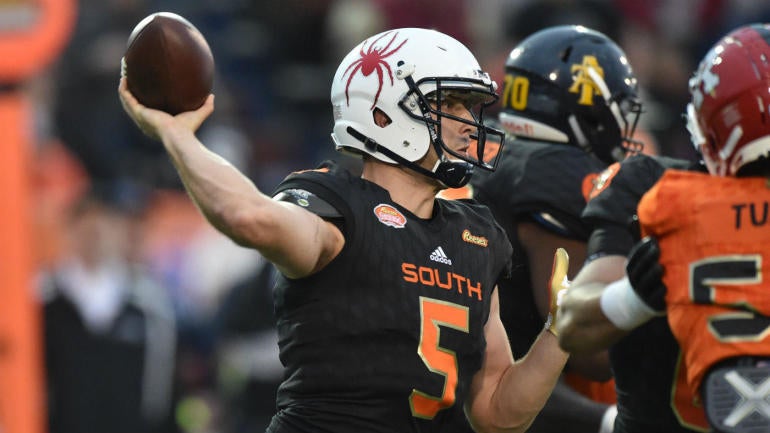 When Thursday was over, we had a crazy Round 1 and now it's time to turn our attention to Day 2. Chris Trapasso gave you his opinion on the Top 25 remaining prospects and here I'll try to give you a glimpse of how rounds 2 and 3 could shake out.

Will Brinson announce his winners and losers if he wants to know more about the events in Round 1, out of a crazy night. Plus, you can read all Pete Prisco's Round 1 Sheet Music

Looking for a hot new NFL podcast that is your home for NFL Draft coverage? Do not look any further. The Pick 6 podcast with Will Brinson has treated you each day of the draft with new episodes of about 30 minutes each. Subscribe: via iTunes | via Stitcher | via TuneIn | on Google Play .

Let's get to the tips.

Harold Landry, DE / LB, Boston University. The Browns add some pass-rush after passing Bradley Chubb to No.4. But would not you rather have Chubb and Josh Jackson?

Will Hernandez, G, UTEP. Maybe not the biggest need, but Hernandez is a first round talent and fits in with what the Giants are doing in attack.

Connor Williams, OT, Texas. The Browns get a new left tackle on Joe Thomas' resignation if Williams can stay in position.

Joshua Jackson, CB, Iowa. The Colts get a first-round talent in the cornerback phase as no linebackers are worth it here.

Sam Hubbard, DE, Ohio State. Add another nice piece for defense after being attacked in Round 1.

Nick Chubb, RB, Georgia. Running Back should be the choice, and my gut feeling says it could be Chubb over Derrius Guice and Ronald Jones II.

James Daniels, G / C, Iowa. The bears are given a great value when they have missed Quenton Nelson.

Dallas Goedert, Texas, South Dakota State. We could see the Broncos move up for James Daniels or Will Hernandez, but if they stay, there's a talented tight end.

Malik Jefferson, LB, Texas. This plectrum must be Defense after being attacked in the 1st round. Jefferson is probably the best available.

Fred Warner, LB, BYU. This satisfies a need, and I think Warner could go higher than we expect because of his cover ability.

Mason Rudolph, QB, Oklahoma State. If someone would not trade with Rudolph here, Pats could get him with the Jimmy Garoppolo.

Derrius Guice, RB, LSU. If the Redskins can get Guice back in fifth, they have to like that.

Lorenzo Carter, DE / LB, Georgia. The Packers landed a corner in Round 1 and got their pass rusher.

Isaiah Oliver, CB, Colorado. This would be a great value to Oliver, who could have been a late choice on Day 1. Also, do not exclude another offensive lineman.

Christian Kirk, WR, Texas A & c. M. There is a good value in the corner, but why should Josh Rosen not give a receiver to grow?

Harrison Phillips, DT, Stanford. The Chargers value security in the first, and here they come back and pick up a defensive weapon.

Courtland Sutton, WR, SMU. When Sutton takes off from the first few tips, I imagine the cowboys trying to step up. Here they only miss, as the Colts land a large receiver to replace Donte Moncrief.

D.J. Chark, WR, LSU. The cowboys should get involved with Sutton, but if they miss that, Chark is a nice consolation prize.

Ronald Jones II, RB, USC. The Lions should have a good start in the second round to run back.

Donte Jackson, CB, LSU. The Eagles might try to go back, but if not, there should be a good value in the corner.

Carlton Davis, CB, Auburn. The Bucs have the ammunition to maneuver for important targets, but if they keep all their tips, the top talent will still be late in the round.

Dorance Armstrong, OLB, Kansas. The Chiefs showed great interest in Armstrong during the preliminary draft, and perhaps did not want to miss it.

Justin Reid, FS, Stanford. The Panthers would be thrilled to bring Reid here. Expect them to take care of him in the second round.

Austin Corbett, G / C, Nevada. The Bucs did not get Nelson in the first round, but Corbett is a solid consolation prize for guard duty.

Josh Sweat, DE / LB, Florida State. I thought sweat was an option for the titans in the first round, so this could be a bargain as an apprentice behind their upcoming free agent.

Braden Smith, G, Auburn. It's hard to pass on Maurice Hurst, but I think medical problems could bring him down. The Falcons might look for DT in a round our two, but a guard upgrade here makes sense.

Jerome Baker, LB, Ohio State. This is the place where the 49ers tackle a linebacker and Baker a second-round talent.

Darius Leonard, LB, South Carolina State. The Steelers could not land a linebacker in the first round, but Leonard is a nice consolation prize.

Tyrell Crosby, OT / G, Oregon. An interesting talent is on the board at Receiver and Tight End, but I can see how the Jags take Crosby and make him wake up.

Uchenna Nwosu, DE / LB, USC. The Vikings could take up Nwosu and train him under Anthony Barr if they continue to put talent into their defense.

Rasheem Green, DE, USC. The Patriots finally go with a defensive pick, taking a pass rusher who can produce down on the third inside.

Orlando Brown, OT, Oklahoma. The Browns could try to go back without round 3 pips, but although they used to go with a tackle earlier, it makes sense to deepen their position.

Michael Gallup, WR, Colorado State. The Ravens have added a lot of listener talent in the offseason, but they still need young players who can become starters like Gallup.

Brian O'Neill, OT, Pittsburgh. The Giants add two offensive linemen on the second day after snatching back to No. 2 and giving Eli Manning all the help he needs.

Genard Avery, LB, Memphis. The Colts had no value in the linebacker position in Round 2, but they need to address that need sometime.

Jamarco Jones, OT, Ohio State. When the Texans finally come up against the clock, Priority # 1 should be the offensive.

Duke Dawson, CB, Florida. Even if they focus so much on the offensive, the Giants have the chance to find good corners in the third round.

Nathan Shepherd, DT, Fort Hays State. Would not be surprised to see this little school sneaking into the second round.

James Washington, WR, Oklahoma State. That's a nice value for Washington, which gives the Broncos a future in the recipient position.

Mike Gesicki, TE, Penn State. The Jets used to find a franchise quarterback, and here they give it a new favorite destination.

Martinas Rankin, G / C, Mississippi State. The 49ers take Rankin and kick him in to improve their talent.

Maurice Hurst, DT, Michigan. The Raiders have plenty of tips on the third day, so they can afford to risk that Hurst's medical alerts will not be a big problem.

Arden key, DE, LSU. The Bengals will bet on a guy with character issues, and Key could be a devastating pass rusher.

78th Kansas City Chiefs (by WAS)

Anthony Miller, WR, Memphis. The value is too good to miss Miller, who brings depth to Tyreek Hill and Sammy Watkins.

Kerry Johnson, RB, Auburn. This pimple was traded twice on Thursday, and the Steelers may consider using it for a potential heir of Le Veon Bell.

Holton Hill, CB, Texas. The Texans should put more talent into the corner, even after signing Aaron Colvin.

Ronnie Harrison, S, Alabama. Harrison could go much sooner, so consider that a good value for the cowboys defense.

Jessie Bates III, S, Wachwald. Another great value for the safety of Lions.

Josey Jewell, LB, Iowa. The Raven have earlier focused on offensive, and here they improve their depth at linebacker

Kyle Lauletta, QB, Richmond. The Chargers take on a young quarterback to develop behind Philip Rivers.

Rashaan Gaulden, CB, Tennessee. Considering that Gaulden can instantly become a slot corner, it could be a bargain.

Anthony Averett, CB, Alabama. After trading with Marcus Peters, the Chiefs need to improve their talent.

Ogbonnia Okoronkwo, OLB, Oklahoma. Look, it's the Rams! With their first pick, they take a pass rusher to add to the rotation.

Chad Thomas, DE, Miami The Panthers must bring young talent to the game with a defensive end with Julius Peppers on his last legs.

Armani Watts, S, Texas A & M. The Titans add a third security to the back end of their defense.

P.J. Hall, DT, Sam Houston State. Now is the time to put even more talent on the defensive after an offensive.

Ian Thomas, Texas, Indiana. The Saints once paid a high price for a pass rusher, and now they can add talent on a tight end.

Kemoko Turay, OLB, Rutgers. The Steelers have previously added an inner linebacker, and here they add depth to Pass-Rusher.

Jeff Holland, DE, Auburn. The Jaguars add more Pass-Rush talent and could think about developing Holland as a strong linebacker.

Geron Christian, OT, Louisville. The Vikings are attacking a new real tackle, and if he is able to start, they can retake Mike Remmers.

Dalton Schultz, TE, Stanford. The Patriots are attacking a man who can provide better depths behind Gronk.

Dante Pettis, WR, Washington The Bills lost many draft picks by appearing twice, and after a long wait, eventually added talent to the receiving position.

M.J. Stewart, CB, North Carolina. The Cardinals should take care of the corner position on Day 2, and Stewart is a good value here.

Chukwuma Okorafor, OT, western Michigan. The Texans are doubling because they need all the help they can get in the position.