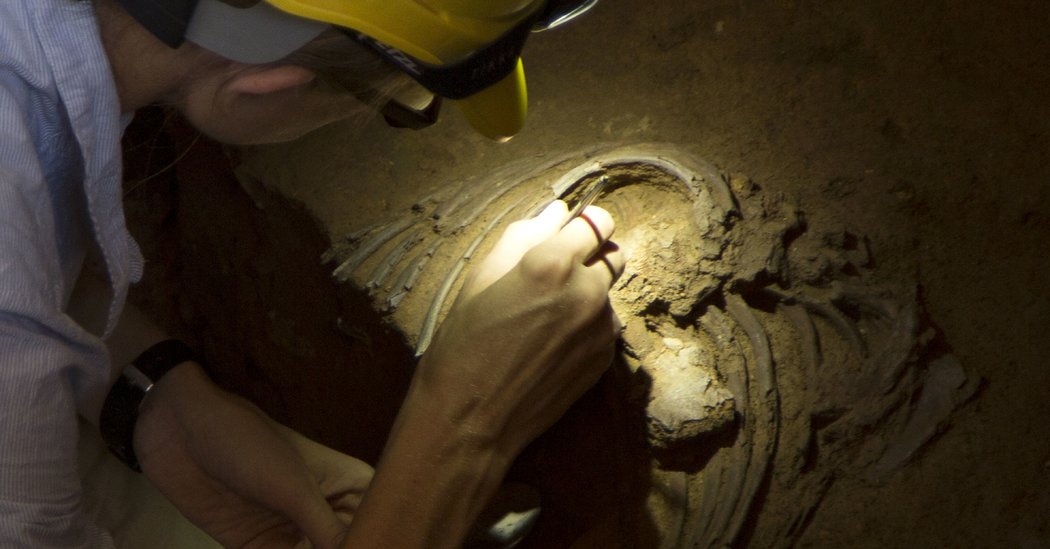 A DNA segment associated with Covid-19 was passed on by Neanderthals 60,000 years ago, according to a new study.

Scientists do not yet know why this special segment increases the risk of a serious illness caused by the coronavirus. However, the new findings, which were put online on Friday and have not yet been published in a scientific journal, show how some evidence of modern health stems from ancient history.

“This cross-over effect, which occurred 60,000 years ago, continues to have an impact today,” said Joshua Akey, a geneticist at Princeton University who was not involved in the new study.

This piece of the genome, which contains six genes on chromosome 3, has had an enigmatic journey through human history, according to the study. The variant is common today in Bangladesh, where 63 percent of the people carry at least one copy. Across South Asia, almost a third of the people inherited the segment.

However, the segment is much rarer in other countries. Only 8 percent of Europeans wear it and only 4 percent have it in East Asia. It is almost completely absent in Africa.

It is not clear what evolutionary pattern this distribution has produced in the past 60,000 years. “That’s the $ 10,000 question,” said Hugo Zeberg, a geneticist at the Karolinska Institute in Sweden, who was one of the authors of the new study.

One possibility is that the Neanderthal version is harmful and has become less common overall. It is also possible that the segment will improve the health of people in South Asia and possibly offer a strong immune response to viruses in the region.

“It should be emphasized that at this point this is pure speculation,” said Dr. Zeberg’s co-author Svante Paabo, the director of the Max Planck Institute for Evolutionary Anthropology in Leipzig.

Researchers are only beginning to understand why Covid-19 is more dangerous for some people than for others. Older people are more seriously ill than younger people. Men are at higher risk than women.

Social inequality is also important. In the United States, blacks contract coronavirus far more often than whites, due in part to the history of systemic racism in the country. Black people have a high rate of chronic diseases such as diabetes, as well as living conditions and jobs that can increase exposure to the virus.

Genes also play a role. Last month, researchers compared people in Italy and Spain who were very ill with Covid-19 to people who had only mild infections. They found two sites in the genome that were associated with a higher risk. One is on chromosome 9 and contains ABO, a gene that determines blood type. The other is the Neanderthal segment on chromosome 3.

However, these genetic findings are updated rapidly as more people infected with the coronavirus are examined. Just last week, an international group of scientists called the Covid-19 Host Genetics Initiative released a new dataset that downplayed the risk of a blood type. “The jury is still not dealing with ABO,” said Mark Daly, a geneticist at Harvard Medical School who is a member of the initiative.

The new data showed an even stronger link between the disease and the chromosome 3 segment. People who carry two copies of the variant are three times more likely to suffer from serious illnesses than people who do not.

After the new data stack was released on Monday, Dr. Zeberg to find out whether the chromosome 3 segment was passed on by Neanderthals.

Some 60,000 years ago, some ancestors of modern people from Africa expanded and swept across Europe, Asia and Australia. These people met Neanderthals and crossed. Once Neanderthal DNA entered our gene pool, it spread across generations long after Neanderthals died out.

Most Neanderthal genes have been shown to be harmful to modern humans. They may have affected people’s health or made it difficult to have children. As a result, Neanderthal genes became rare and many disappeared from our gene pool.

However, some genes appear to offer an evolutionary advantage and are common. In May, Dr. Zeberg, Dr. Paabo and Dr. Janet Kelso, also from the Max Planck Institute, that a third of European women have a Neanderthal hormone receptor. It is associated with increased fertility and fewer miscarriages.

Dr. Zeberg knew that other Neanderthal genes common today even help us fight viruses. As modern humans expanded to Asia and Europe, they may come across new viruses against which Neanderthals had already developed a defense system. We have stuck to these genes since then.

Dr. Zeberg examined chromosome 3 in an online database with Neanderthal genomes. He found that the version that increases the risk of heavy Covid-19 is the same version that was found in a Neanderthal man who lived in Croatia 50,000 years ago. “I texted Svante immediately,” said Dr. Zeberg in an interview, referring to Dr. Paabo.

Dr. Paabo was on vacation in a cottage in the remote Swedish countryside. Dr. Zeberg appeared the next day and they worked day and night until they put the study online on Friday.

“It’s the craziest vacation I’ve ever had in this cottage,” said Dr. Paabo.

Tony Capra, a geneticist at Vanderbilt University who was not involved in the study, found it plausible that the piece of DNA originally offered an advantage to Neanderthals – perhaps even against other viruses. “But that was 40,000 years ago, and here we are now,” he said.

It is possible that an immune response that acted against old viruses overreacted against the new corona virus. People who develop severe cases of Covid-19 usually do so because their immune systems trigger uncontrolled attacks that scar their lungs and cause inflammation.

Dr. Paabo said the DNA segment could be partially responsible for why Bangladeshi ancestry in the UK is dying from Covid-19 at a high rate.

It is an open question whether this Neanderthal segment continues to have a strong connection to Covid-19 as Dr. Zeberg and other researchers examine more patients. And it may take segment discoveries in ancient modern man fossils to understand why it became so common in some places but not in others.

But Dr. Zeberg said that the 60,000-year journey of this piece of DNA in our species could explain why it is so dangerous today.

“His evolutionary history can give us some pointers,” said Dr. Zeberg.