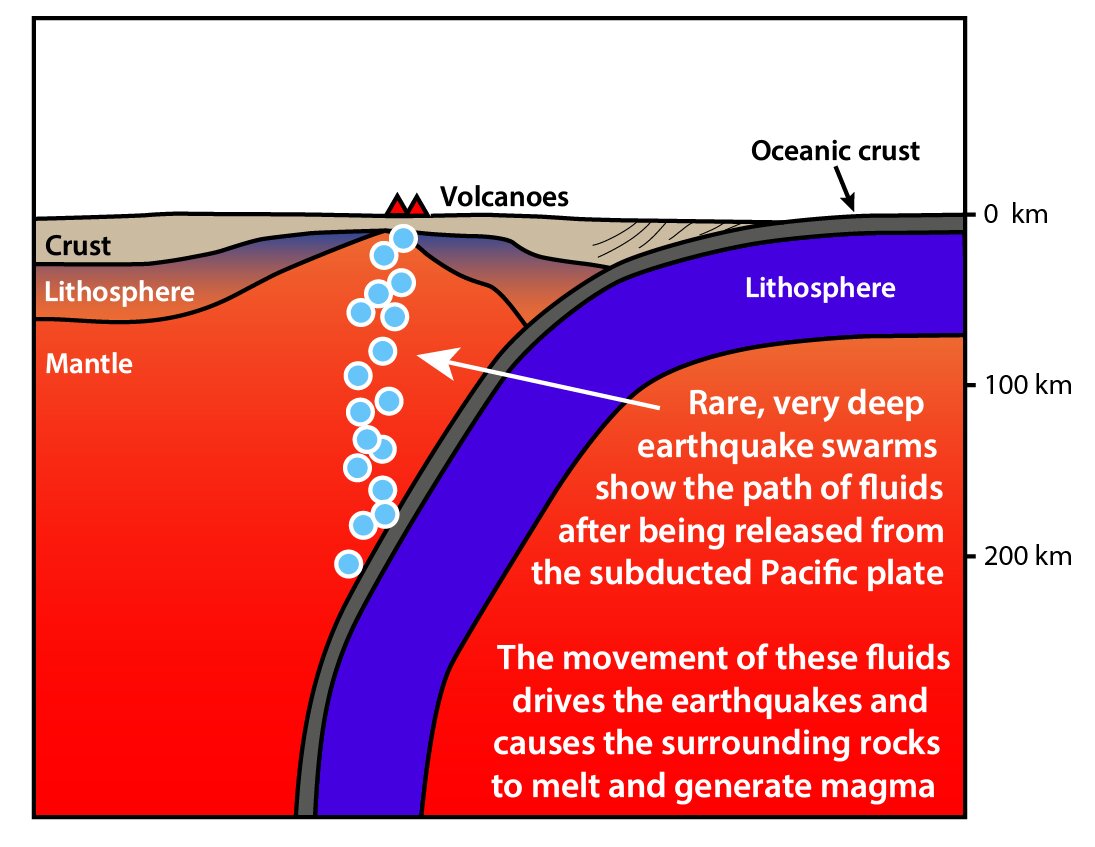 Deep beneath the seafloor, a sinking tectonic plate causes a "swarm" of earthquakes that deliver newly formed volcanoes melted rock.

Earthquake swarms occur when a large number of earthquakes occur in close proximity within a short time. Two such swarms found the researchers in the investigation of the bow system Mariana and Izu-Bonin in the Pacific Ocean.

Plotting each earthquake swarm on a three-dimensional map, the earthquakes formed a tubular structure through which the melt flowed. The rock traveled from a sinking tectonic plate at a depth of about 200 km to a magma chamber beneath a volcano.

The discovery solves a missing piece of the tectonic puzzle: it reveals the way liquids and molten rock pass through the deep earth to form volcanoes on the surface.

The bow system of Mariana and Izu-Bonin lies on the seabed and stretches over 2800 kilometers from Japan to the south to Guam and beyond. This is where two tectonic plates meet – the Philippine Sea Plate and the Pacific Plate.

As the Pacific plate sinks into the mantle, it carries water deep into the earth. The plate gets hotter and experiences the more pressure the deeper it goes, until superheated water tries to escape, causing the rock to break and melt and create a path for the molten rock to rise.

Leading author Lloyd White from the UOW's School of Earth, Atmospheric and Life Sciences described the process as a natural hydrofracting effect.

"When fracking, which is used by the oil industry, they drill deep into the earth up to a few kilometers and then continue to pump liquid down until the pressure rises and the rocks break, creating a path for the oil or oil Natural gas is created to flow through the rocks and into a pipe back to the surface, "said Dr. White.

"In this case, the tectonic plate carries the water very deep into the earth, up to about 200 kilometers below the surface, and as the plate falls it gets hotter and the pressure rises, driving water out of the subducted plate.

"Ultimately, it is the water that melts these slowly moving stones and causes these rare earthquakes. The water gets so hot and is under pressure that it has to go. When it moves up, the stones break and melt and form magma. This magma feeds the volcano at the top of the system.

"It's much like fracking, but on a much larger scale and completely driven by Earth's natural processes rather than being induced by humans."

The two earthquake swarms occurred deep in the earth in a zone where there are usually no earthquakes. The simplest explanation is that they were caused by a process similar to fracking, either by breaking the rock in front of the superheated fluid or by collapsing the tube after the fluid had passed through the system.

"Geologists have always believed that the water in this system is going up, but we've never had a good chance to figure that out – these examples – a crazy event we've come across – clearly show where the water is going flow, "said Dr. White.

co-author dr. Dominique Tanner, also from the UOW's School of Earth, Atmospheric and Life Sciences, said, "We can actually use the earthquakes to find out how fast these fluids are moving, we know exactly when and where the earthquakes occur estimate how fast the liquid moves through the deep earth, which is faster than one kilometer per hour – much faster than we thought so far. "

Although much more research is needed, the discovery can help scientists monitor which volcanoes are primed with increasing amounts of magma from the deep earth.

Is there an ocean under our feet?