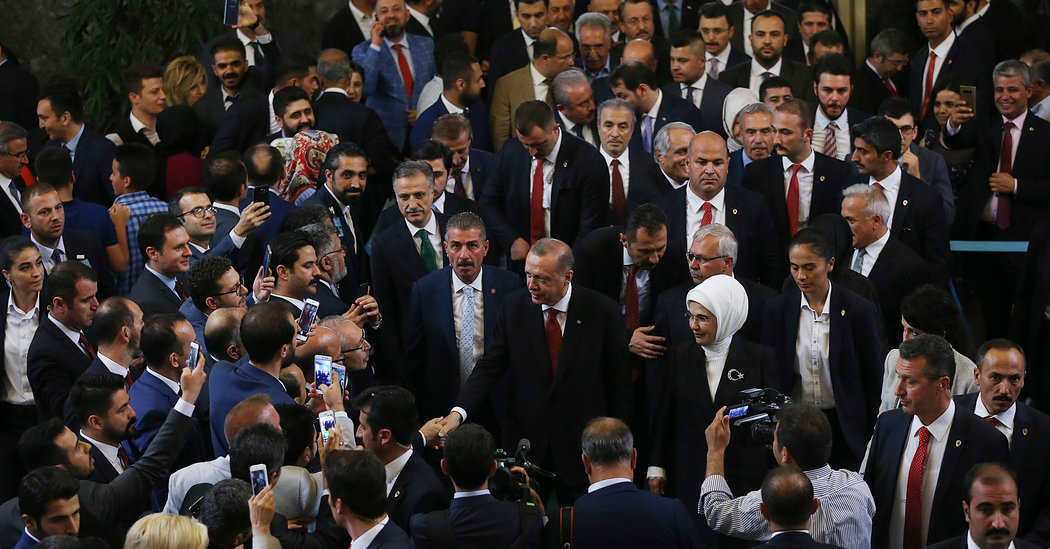 ANKARA, Turkey – Recep Tayyip Erdogan was sworn in on Monday for a five-year term under a new constitution that gives the Turkish president full executive powers. He promptly named his son-in-law finance minister, an appointment that unsettled financial markets and raised new concerns over the concentration of so much power in a politician.

"We as Turkey and the Turkish nation are making a new start here in your presence," Erdogan told hundreds of foreign leaders, dignitaries and party members gathered in the gardens of the Presidential Palace in the capital, Ankara. "We will take significant steps in all areas, from macroeconomic balances to investments, to make Turkey one of the 1

0 largest economies in the world."

Mr. Erdogan, who has been at the forefront of Turkish politics since 2003, received a new mandate from voters last month, a pledge to make Turkey more efficient, and a large and strong state. After a referendum for which he campaigned last year, the once-ceremonial presidency has greatly expanded its power.

Whether Mr Erdogan can handle the staggering Turkish economy is another matter. The public debt has exploded, fueled by extensive infrastructure projects, many of which were built by contractors linked to Erdogan and his allies. The Turkish economy is still one of the fastest growing in the world, expanding by 7.4 percent last year, but the lira has recently declined, reflecting fears among creditors and investors.

The currency continued on Monday after Erdogan appointed his son-in-law, Berat Albayrak, a former energy minister, treasurer and finance minister. The new Cabinet, which was announced late in the evening, was eagerly awaited to receive an indication of what Mr. Erdogan is planning with his newfound powers.

Many of the appointments were bureaucrats; only four were elected politicians. The Foreign Minister, Mevlut Cavusoglu, maintained his position; former army chief Hulusi Akar was appointed Minister of Defense; and an American-trained bureaucrat, Fuat Oktay, was appointed vice-president.

Mr. Oktay had served as Undersecretary in the Prime Minister's office, which was abolished with the transition to a presidential system.

"That means there will be more continuity than change," said Ozgur Unluhisarcikli, director of the German Marshall in Ankara United States Fund, said before the announcement. "They'll be translators," he added, "so he'll take matters into his own hands."

Mr. Erdogan has defended his constitutional amendment to introduce a strong presidential system, passed by referendum last year, to increase efficiency and a responsive government.

"The presidential system is not a compulsion, but a specific choice to which history has led us," he told his guests. "For the first time in Ottoman history, Turkey did not make its choice at a critical juncture through a military coup," he said, "but with the free will of our nation."

Critics warn the new president The system will not solve Turkey's problems, from growing economic tensions to its bitterly divided policy.

"It's completely wrong that when we change the system, problems will be solved," said Murat Sevinc, a constitutional law professor who writes a column for the Duvar newspaper. "They have built a system that is not governable, not manageable, whoever is elected."

Few Western leaders were present – the only leader of the European Union was the President of Bulgaria – although a former Chancellor of Germany, Gerhard Schröder, who had close ties with Mr Erdogan since his term in office, was present

Prime Minister Dmitri A Medvedev from Russia sat next to the presidents of Somalia, Sudan, Chad and Pakistan in the front row. The Emir of Qatar was the only Arab leader and President Nicolás Maduro of Venezuela was the only leader from America. The United States was represented by the Chargé d'Affaires in Ankara, Philip S. Kosnett.

The US and European nations have criticized the increasing authoritarianism of Mr. Erdogan in recent years, in particular his crackdown on policy opponents since a failed coup in July 2016. More than 100,000 people have been arrested since the coup in a state of emergency and 150,000 people freed from their jobs.

hours before his inauguration Mr. Erdogan dismissed a decree that ordered the shooting of another 18,000 civil servants, mostly police and military personnel, but also teachers and academics.

The symbols of the day's events were scrutinized as they reflected on what was to come. Some of the celebrations were canceled out of respect for the 24 people who were killed when derailed a Sunday night train in northwestern Turkey.

The President remained strict throughout, even as he beckoned to clapping supporters.

Mr. Erdogan won the presidential race with 52 percent of the vote, but his party won no majority in parliament and will work with the Nationalist Movement Party. Almost half of the Parliament, representing a population the size of Spain, remains against Mr. Erdogan, said Soner Cagaptay, author of a book on Mr. Erdogan, "The Last Sultan."

A thunderclap sounded the next moment Mr. Erdogan vowed and it rained over the crowd gathering to celebrate the inauguration of the city in the gardens of the Presidential Palace.

At first Erdogan honored in the mausoleum of Mustafa Kemal Atatürk, the founder of the modern Turkish republic.

The gesture seemed to appease opponents who had accused Mr. Erdogan of unraveling the secular parliamentary republic. The legacy of Mr. Ataturk

Mr. Erdogan rode in a black car with red carnations flanked by a mounted police escort to the presidential palace when the Turkish artillery fired 21 salute shots.

On land that Atatürk had reserved for a trial farm, Mr. Erdogan built a monumental palace four times the size of Versailles.

In royal procession, he went with his wife Emine by his side past a colored honor guard in medieval costumes. He greeted guests and supporters and allowed himself a smile.