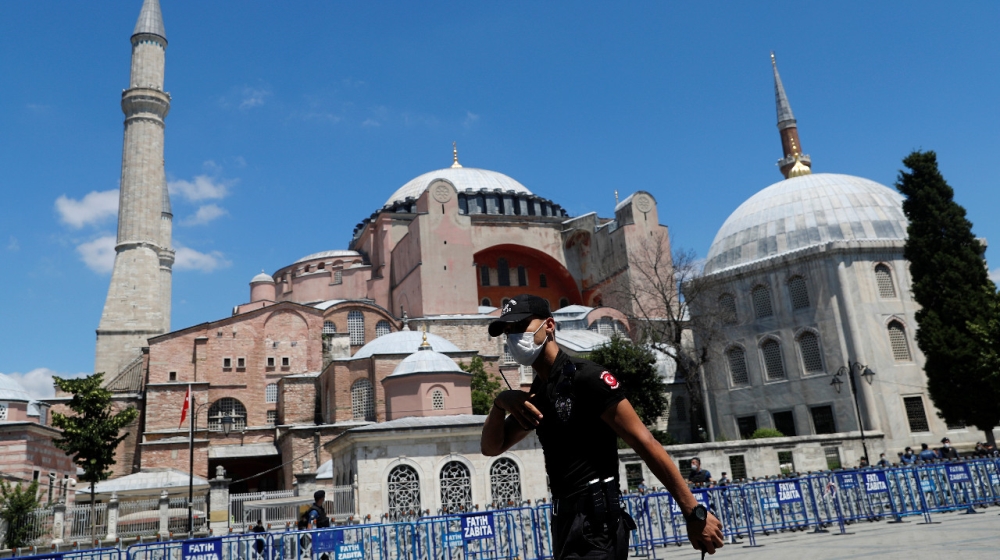 Turkish President Recep Tayyip Erdogan opposed the international condemnation of the decision to change the status of Istanbul’s landmark Hagia Sophia from a museum to a mosque, saying it was an expression of his country’s willingness to exercise its “sovereign rights”.

In the past, he has repeatedly called for the impressive building to be renamed the Mosque, and in 2018 he recited a verse from the Koran in Hagia Sophia.

“Those who do not take a step against Islamophobia in their own countries … are attacking Turkey’s will to exercise its sovereign rights,”

; said Erdogan at a ceremony he attended on Saturday via video conference.

The colossal Hagia Sophia was built 1500 years ago as an Orthodox Christian cathedral and after the conquest of Constantinople, today’s Istanbul, by the Ottomans in 1453, it was converted into a mosque. The secular Turkish government decided in 1934 to make it a museum.

Erdogan officially converted the building back into a mosque on Friday, declaring it Muslim, hours after a Supreme Court annulled the 1934 decision to convert it into a museum. He said Muslim prayers would begin on July 24th in the UNESCO World Heritage Site.

After the court decision on Friday, the Muslims gather for evening prayer in front of Hagia Sophia [Murad Sezer/Reuters]

The president continued the plan despite the calls by NATO ally USA and Russia, with which Ankara has had close ties in recent years.

Greece quickly condemned the move as a provocation, France regretted it, while the US also expressed its disappointment.

“The cathedral is on the territory of Turkey, but it is without question everyone’s legacy,” he told Interfax news agency.

The World Council of Churches wrote to Erdogan, expressing “grief and dismay” at the move and asking him to reverse his decision.

As a World Heritage Museum, “Hagia Sophia was a place of openness, meeting and inspiration for people from all nations,” said Interim Secretary General Ioan Sauca in the letter published on Saturday.

Sauca said museum status was “a strong expression” of Turkey’s commitment to inclusion and secularism.

“It is a blow to global Christianity … For us [Hagia Sophia] remains a cathedral dedicated to the Savior, “he told the state-controlled television Rossiya24 late Friday.

But Ozgur Unluhisarcikli, Ankara director of the German Marshall Fund, told AFP that the move would win hearts and minds at home, as most Turks “would favor such a decision for religious or nationalistic sentiments.”

“This is a debate that President Erdogan cannot lose and the opposition cannot win. In fact, this issue also has the potential to separate the opposition parties.”

Erdogan’s nationalist ally Devlet Bahceli welcomed the decision and said that the reopening of Hagia Sophia for Muslim worship “has long been our wish”.

The police put up barriers

On Saturday, the police had put up barriers around Hagia Sophia.

“We wanted to visit Istanbul and the Hagia Sophia Museum, but unfortunately we found that it is closed from today,” said Renato Daleo, a tourist from Italy.

Ksennia Bessonova, a Russian woman living in Istanbul, flanked by her 16-month-old daughter and husband, said they also wanted to visit. “It was our little dream, because since our daughter was born we have not been able to come and let’s go,” she said.

She hoped the authorities wouldn’t change that.

“From what our friends and family told us, it was special and we wanted to feel the same. At the moment I’m not sure what to expect, but I’m kind of sad.”

On Friday, Erdogan assured that Hagia Sophia was open to all visitors, including non-Muslims.

“The doors of Hagia Sophia remain open to visitors from all over the world,” tweeted his press spokesman Fahrettin Altun on Saturday.

“People of all religious denominations are welcome and encouraged to visit them, just as they have been able to visit other mosques, including the Blue Mosque.”