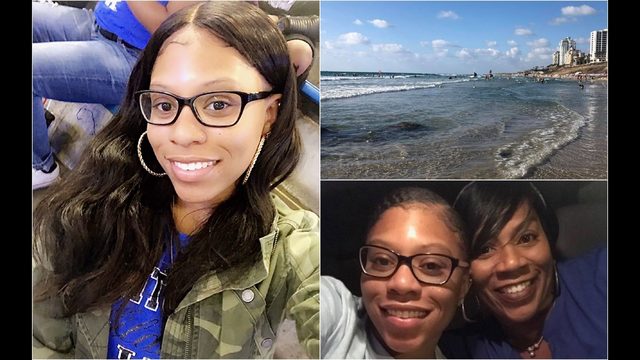 A Fort Myers teenager on an exchange program in Jordan has disappeared in Tel Aviv, Israel.

Thomas-Mora exchanged text messages with her daughter at 3:30 pm Saturday. It was 10:30 in Israel. and her daughter had told her that she was "for the night". Less than eight hours later, she received a call from CIEE: Council On International Educational Exchange, which offered the study abroad program through the University of Kentucky.

Bill Bull, Vice President of Health and Safety at CIEE, gave her a voice mail message that her daughter, who was studying in Amman, Jordan, had gone to Israel for the weekend. "I want to talk to you about what's going on in Tel Aviv and give you some updates," Bull said in a recorded message. "Right now, there are concerns that she went swimming and she has not come back yet and it's about 2 ½ hours, she is looking for search and rescue and the US Embassy is involved."

When Thomas-Mora called him back, Bull said that the teenager had left with two other young people from the "Midnight Swim" exchange program. When they were out in the water, they were trapped in a torrent. All three swam towards the shore, Thomas-Mora said Bull would have told her, but Jones was not there. The other students alerted the authorities.

Thomas-Mora said she also received a call from the US Embassy in Tel Aviv. The woman she spoke with told her that the Israeli police are still actively looking for her daughter.

Bull, reached by telephone, said the US embassy and Israeli authorities supported and worked with a search and rescue team to track down Jones.

"There were other students in Tel Aviv," Jones said, "and they are naturally concerned for the well-being of their friend."

More: Oregon woman rescued on a cliff after 4-day disappearance charged with 96 offenses

According to family members, these friends were a 20-year-old woman from Washington, DC , who also attended the University of Kentucky, and a 21-year-old man from Illinois who visits West Virginia University.

Thomas-Mora said that her daughter could swim but prefer to walk on the beach.

"She's a decent swimmer," Thomas-Mora said, but she had never known she swam in the Gulf when she walked to the beach in southwest Florida. "The furthest thing I know is that she has to go to wade and take photos on the water's edge."

Jones's cousin Jean Davis, one of about 50 disturbed relatives who gathered in Thomas Mora's house told Dupree Street on Sunday that she does not believe that Jones would have gone swimming at midnight. "That's not like her," Davis said. "She would not take such a risk."

In December, Thomas-Mora's son, Samuel Jones Jr., 22, was shot dead in a double homicide in Lehigh Acres. She has another daughter, the 3-year-old Naomi Ruth Mora

Jones was in the International Baccalaureate program at Dunbar High School, said Thomas-Mora. Jones was a biology major with a minor in Islamic Studies, which was why she studied in Jordan, her mother said. She traveled to Amman in June and should return to the US next week.

Thomas-Mora prepares to go to Tel Aviv on Monday.

Jones, her mother said, is an excellent student whose high G.P.A. She had helped her earn a place in the University of Kentucky's pre-medical program. "It should start on the 23rd," Thomas-Mora said before bursting into tears.