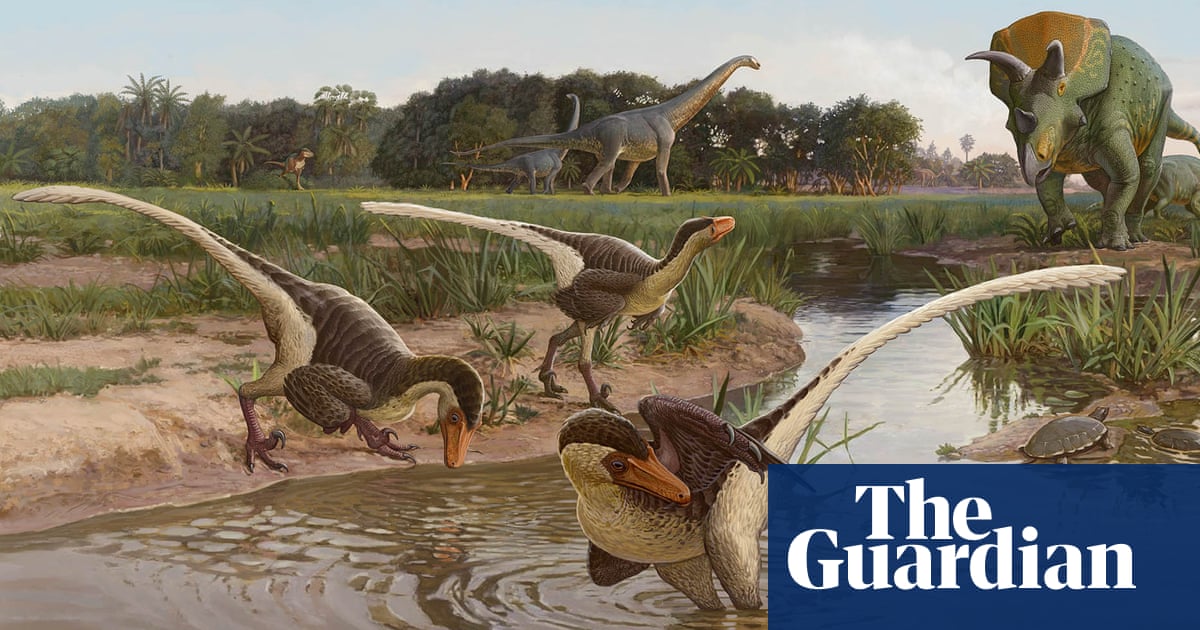 A carnivorous dinosaur with a feathered body, an iron handle, and a tail for agile prey tracking was discovered by fossil hunters and revealed that birds of prey dinosaurs thrived to the point where the asteroid hit 66 million years ago.

The remains, which comprise about 20 bones, were found in rocks in the San Juan Basin in New Mexico, which were formed about 67 m years ago. They are believed to come from a type of dromaeosaur ̵

1; a family of theropodendinosaurs, which includes raptors – that appear to be closely related to the Velociraptor.

Synchronized Dineobellator notohesperus – a nod to the region’s indigenous people, the Navajo, the Latin word for warrior, and the southwestern United States where it was found – the animal would have been about two meters long, about 18 to 22 kg, and covered in feathers.

Researchers say the fossils have a number of unusual features. “The upper arm bone has a very pronounced angle, and that basically means that the muscles attached to it would have been more efficient than others [dromaeosaurids]”Said Dr. Steven Jasinski of the University of Pennsylvania and co-author of the research.

“[That] would have allowed muscles of similar size to become stronger and do more work faster on that animal. “

The animal’s claws also showed large projections on their underside, to which muscles and tendons would have attached. “They are particularly large, which would have given this animal a really strong grip and the ability to grasp things with both hands and feet,” said Jasinski.

And while many dromaeosaurids had stiff, reinforced tails that served as a counterweight and helped the animals run fast while they were low on the ground, the newly discovered animal had an additional feature: mobility.

“The most important thing about dineobellator is that the vertebrae at the base of the tail are arranged differently so that the tail is very flexible at the base,” said Jasinski. That, he added, means the dinosaur would have been able to flip its stiff tail while chasing zigzag prey, meaning that it was not only a brisk predator but also agile.

While Dineobellator’s last moments are lost for time, the team found a furrow in one of the animal’s claws that appears to have been created at the time of its death – suggesting that the animal has found a sticky end. “We speculate that a fight with another dineobellator or other predatory theropod led to these signs,” they write.

Jasinksi noted that dromaeosaurids were found in both Asia and North America about 125 million years ago, but there were only a few fossils from the subsequent period, with more recent remains discovered mainly in Asia.

“It looks like Dineobellator’s ancestors had basically emigrated from Asia and would have diversified as soon as they returned to North America shortly before their extinction at the end of the Cretaceous period,” said Jasinski.

Jasinski said the results emphasized that there was still considerable diversity before mass extinction, although some argued that dinosaurs were in decline. “It shows that dromeosaurids are basically still evolving and are still trying new evolutionary paths and functions to the end,” he said.

Dr. Stephen Brusatte, a paleontologist at Edinburgh University who was not involved in the research, agreed, adding that Dineobellator was the best fossil bird of prey dinosaur from South North America at the end of the dinosaur age and one of the last survivors was bird of prey.

“In fact, there seem to be many types of raptors in North America at the time, so they were really successful,” he said.

The creature would have been scary, he added. “If you had seen it alive, Dineobellator would have looked like a strange, long-tailed, toothy bird – but one that could hunt you on foot and exempt you with its claws.”

Farewell, earth! The mercury probe successfully flies by to penetrate deeper into the solar system.

Starlink mission scheduled for next week at the Kennedy Space Center

The corona virus study by Belgian professors caused a sensation and called for people to stay 13 to 65 feet away from hikers, runners and cyclists