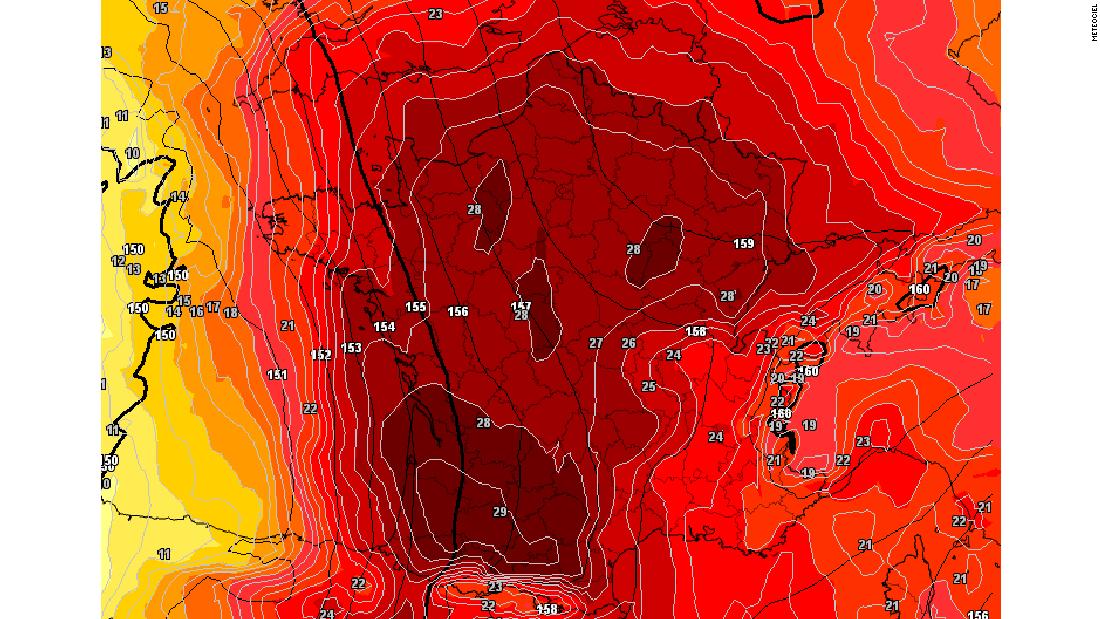 Last week, meteorologist Ruben Hallali found a fitting metaphor in this image: a weather forecast model for Thursday, June 27th, with temperature patterns across France randomly creating the image of a screaming skull. Of course, he tweeted it matched with Edvard Munch's 1983 painting "The Scream".
The map was first published on June 20 on Météociel, a French website that automatically generates weather pattern visualizations based on data from various predictive models. Météociel spokesman Sylvain Dupont told CNN that this special map was generated from real data created by the US Forecast Global Forecast system.

"By coincidence, it was simply possible to imagine a particular form of skull in this map," he said, emphasizing the randomness of the apparition. "On our website, there are so many maps created for every updated prediction that it's statistically possible that some look like something."

The card is still "remarkable," Dupont said, with air temperatures of 26 to 28 degrees Celsius in most of France, an unusual high for the season. "It represents well the current Canicule," he added. CNN Weather forecasts a peak of 34 degrees Celsius for Paris on Thursday.
According to the French weather service Météo-France Canicules differ from ordinary heat waves by their relentless intensity with sultry nights and days. They usually occur between the 15th of July and the 15th of August in late summer.
Climate change could explain the high temperatures reaching Europe unusually early this year, CNN reported earlier. On Wednesday, a German city broke a record at 38.6 degrees Celsius – the hottest temperature ever recorded in the country. Several locations in France also broke heat records.
According to Météo-France, global warming is expected to increase the frequency and intensity of dangerous canicules in the future. The extreme heat has already been killed in Europe and in 2003 hit the whole of France with the death of more than 14,000 mostly older people.

Canicule itself, derived from the Latin word for dog, is a term full of foreboding. Just like Italy's Canicola and the "Dog Days of the Summer" in the US and UK, the term refers to the time of year when the star Sirius, also known as the "dog star" or Orion's hound, rises with the sun Time, there are the ancients, who are connected with heat and chaos on earth.

In the Iliad, Homer describes "the star that men call Orion's Hound" as the brightest of them all – and yet one that is "evil for mortals, for it brings fire and fever into its train." ,