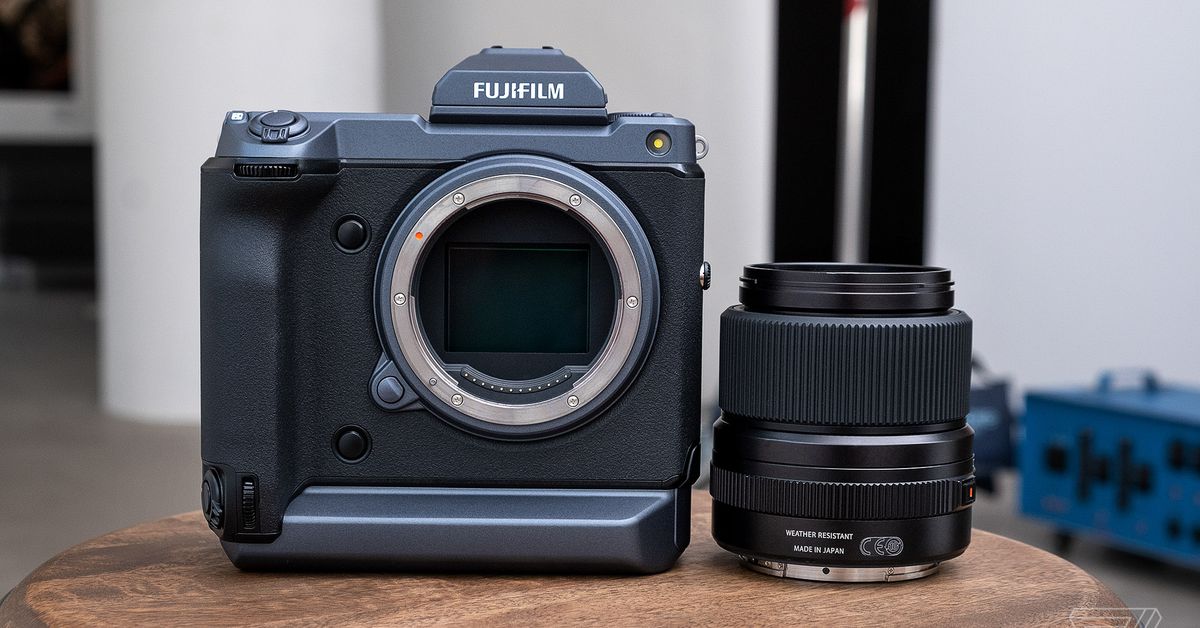 Fujifilm has just officially announced its next medium format camera, the GFX 100. The latest GFX, the new model, connects the GFX 50S and GFX 50R released in 2016 and 2018, respectively. The GFX 100 offers some significant improvements over its predecessors, including much higher resolution, image stabilization in the body, and much faster performance. It will be available for $ 9,999.95 from June 27th.

Unlike Fujifilm's earlier mid-size cases, the GFX 100 has a full-size design, with an integrated vertical handle and a much larger position than the typical mirrorless camera. It's much smaller than Canon's EOS-1

The first medium-format camera with phase detection and autofocus significantly improves the autofocus performance compared to previous GFX models. Fujifilm claims that it offers up to 210 percent performance improvement over the GFX 50S and 50R contrast detection systems. It can track subjects at speeds of up to 5 frames per second in its Continuous Focus Tracking modes and focus at up to -2 EV illumination. The sensor measures 55mm diagonally and provides about 1.7 times the surface of a 35mm full-frame chip.

The new 102 megapixel sensor also offers a much higher resolution. The GFX 100 can compete with some Hasselblad and Phase One mid-range high-end systems. It is a back-illuminated CMOS chip that – similar to the sensor in Fujifilm's X-T3 consumer camera – can output 16-bit images through the company's X-Processor 4. The new sensor has an ISO base of 100, with a peak range of 12,800 before boosting.

Other hardware changes include a new 5.76 million pixel electronic OLED viewfinder, two of which support batteries with up to 800 battery-life shots, a bi-directional touch screen, and full weather resistance. Fujifilm has redesigned the top plate of the camera to be more flexible for different types of shooting (video, manual or automatic). While the special ISO and shutter speed dials, which have made Fujifilm's X Series so popular for mirrorless cameras, have become obsolete, the new display panel can digitally mimic these dials and provide similar direct control.

I had the opportunity to photograph with a GFX 100 before today's announcement, and my biggest win was how similar the smaller Fujifilm X-Series cameras felt in terms of usability and performance. While the GFX 50S and 50R were noticeably slower than the X-T2 or X-T3 on virtually all fronts and therefore much more cumbersome to take pictures of, the GFX 100 felt as snappy and responsive as I would expect from a modern mirrorless camera would, albeit with a much higher output resolution. I was most impressed by the autofocus performance: the camera was able to focus on a variety of lenses and subjects and had the same face recognition and eye detection autofocus features as the X-T3.

] Of course, handling the GFX 100 is a completely different matter from a smaller camera, and I could (accidentally) test the durability of its magnesium alloy case as it slipped off my hands and dropped over the concrete floor. Apart from a bit of dust that could be easily wiped off, the camera remained undamaged and continued shooting smoothly.

The GFX 100 is a big step format world for both Fujifilm and the medium. It is a camera that can compete with the best in terms of resolution and features, but at a much lower price. While it's certainly not the camera for me or the average amateur or semi-professional photographer, professional shooters who rely on digital full-size cameras as a substitute for their medium-format film cameras should give the GFX 100 a serious look.

An external lens does not completely resolve your webcam problems, but it does have its advantages