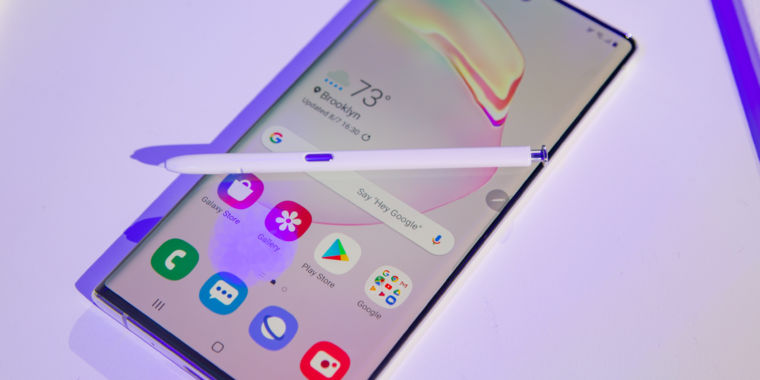 NEW YORK CITY-Samsung showed off its next flagship smartphone last night: the Galaxy Note10. It comes in two variants-large (the Note10) and larger (the Note10 +).

In person, the larger Galaxy Note10 + is absolutely huge. And I say this is not enough for you, but it's just about to come to you. Android phones out there. First the display is actually bigger, with the Note10 + screen topping out at 6.8-inches diagonally, a new high-mark this year. The smaller note is 6.3 inches, which is silent extra huge. The other thing contributing to the imposing presence is the sharper display corners.

The front and back of the device is curved along the long edge, which helps to wrap your tiny, pathetic human hands around Samsung's giant slab of glass and pixels. This is the Note10 + 's 77.2mm wide body has got a new high watermark in phone girthiness. The bigger size is actually quite nice to use with the S-pen, which always feels like it needs a lot of real estate as possible for drawing or handwriting. I still never I do not want to talk to you, but I do not think so.

Samsung Galaxy S10, Samsung's hole-punch camera design is not the greatest on the market and needlessly reduces the useful screen space. Android's compliance rules require an application with an uninterrupted rectangle, so the system status bar needs to be large enough to encompass any camera notch or hole on the front. It makes sense, then, to squeeze your front camera into a small area as possible, so the status bar can be the normal size.

Samsung does not do this, though-and the camera hole impinges so deeply into the display that the status bar needs to be twice as tall as normal to cover it. Relying on a pop-up system or slider mechanisms for the front camera.

The pen is mightier

Like last year, the S-Pen is packing its own internal battery and Bluetooth antenna, allowing it to be used as a remote control. Like last year, you can make the S-Pen's single button photo Like this is the pen's six-axis sensor, allowing for what I call "Harry Potter Mode." You can flick the pen around to remotely do stuff, like it's a magic wand. A left or right flick wants change music tracks or camera modes. There's a circle motion you can zoom in on the camera.

I tried this in person and it felt like playing an old Nintendo Wii game with waggle controls. I still do not understand the idea of ​​remotely controlling a smartphone with the S-Pen. The screen is not big enough, and the phone is up with something to see from a distance. Like many Samsung features, Harry Potter Fashion feels like something designed for a showroom demo and nothing else. The S-Pen is really the only unique thing the Note line offers anymore, and I do not think there's any technical reason for this.

Past Samsung devices had a "Bixby button," which was an extra physical side button that could Samsung's digital assistant. On the Note10, the Bixby button is gone-or maybe it's better to say the Bixby button and power button have merged into one. You can wake and sleep the phone with a single tap of the button. A long press, which is now bringing up the Android power menu, now brings up Bixby. Double tapping the button still brings up the camera. You can not summon the power menu from the side button anymore, either-instead of, a software power button lives in the pulldown notification panel.

It's hard to see how the Galaxy Note10 is likely to excite me. Samsung is likely to be the "speeds and feeds" company, but the device does not have the fastest Qualcomm SoC out there. Qualcomm recently took the wraps off the upclocked Snapdragon 855+ and is already shipping the part in some phones. The Note10 has a regular old Snapdragon 855, with no extra clocks added.

I can not say the Note10 has the best screen, since faster, high-refresh-rate displays are hitting the market now, and they are making a difference in the feel of a smartphone. You can get a 90Hz OLED display on the excellent OnePlus 7 Pro, or a 120Hz OLED on the Asus ROG Phone 2. How Samsung, the smartphone industry's leading display manufacturer, missed the faster refresh rate trend beyond beyond. Heck, the OnePlus 7 Pro's 90Hz display is made by Samsung . It's not like the company does the technology-just reach into the parts and put the better screen in your phones!
The Note line is not the "everything" anymore, either with the removal of the headphone jack and the waffling over at SD card slot (the larger Note10 + has one, but the still-large Note10 does not). Samsung even killed the rear-mounted heart rate sensor this year, if anyone cares. Power users looking for the smartphone version of a Swiss Army Knife should look elsewhere. The Asus ROG phone actually feels more Samsung-y than this Samsung phone, launching it with new display tech, a new SoC, a headphone jack, two USB ports, and a million crazy accessories.

When I reviewed the OnePlus 7 Pro, I said that the pop-up camera, all-screen design, would like to chase the next year. After the Note10 launch, I still feel that way. Samsung needs an answer for its competitors' devices, with faster technology and camera solutions that do not intrude on the display. All these companies from China are kicking Samsung's butt, and they are doing so at a lower price point. The Note10 costs a thousand dollars while a OnePlus 7 Pro is $ 670. These items should be swapped.

Samsung is not turning a new leaf. It's not the same as it is. The Note10 is still shipping with Samsung's slow reskinned version of Android with Samsung's slow updates. It's still full of half-baked redundant software like Bixby. The Note10 is the same strategy Samsung has been doing it for years. The smaller Note10 seems like a bad deal-you're spending $ 950 and you're dealing with cost-cutting measures like the sub-par 1080p display and the missing MicroSD slot.

This year, and the company needs more than a mid-cycle upgrade to keep up. Hopefully Samsung has major upgraded in the works for next year's Galaxy S11.