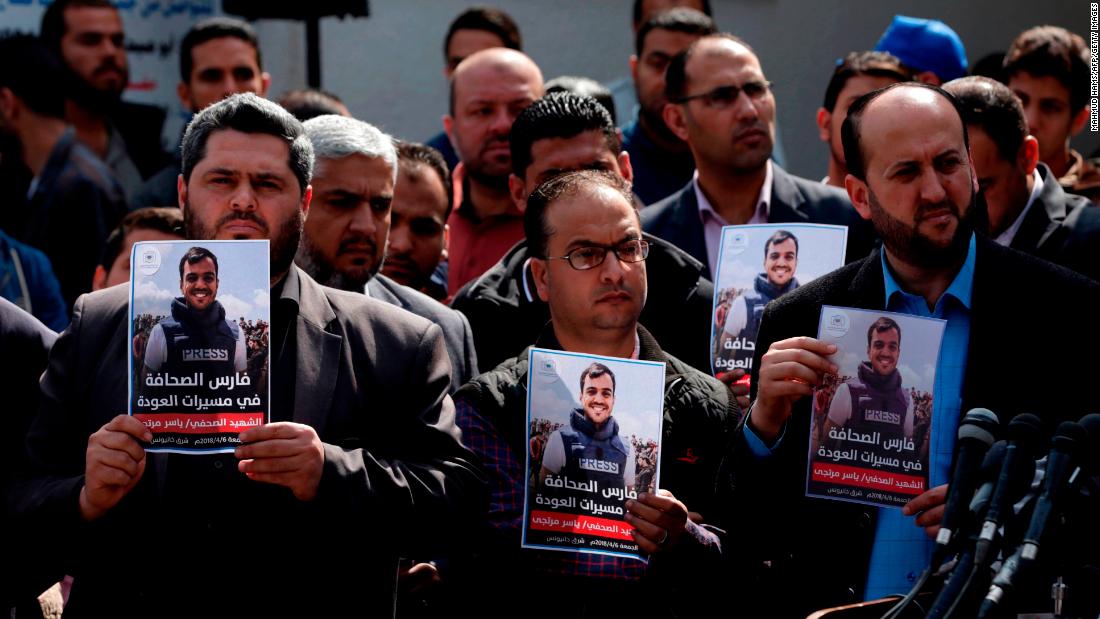 Israeli troops fired live on Friday against Palestinians trying to break the border fence, a week after the violence led to the bloodiest day in Gaza.

Asked About the Journalist's Death Israeli Defense Forces told CNN, "The IDF does not deliberately target journalists, and the circumstances in which journalists were allegedly hit by IDF fires are unfamiliar to the IDF and are under investigation. " When he was injured he wore a vest with the inscription "PRESS".

In total, since the first border fence protest on March 30, 31 people have been violently killed in Gaza by a CNN count based on figures from the Palestinian Ministry of Health

,356 were injured in Friday violence, the ministry said serious about them. Of these, 399 were injured by shots and 16 by rubber bullets.

According to the ministry, the casualties included 24 women and 81 children, as well as another journalist who was moderately injured east of Rafah in southern Gaza.

The Israeli military said it had thwarted numerous "terrorist attacks" and attempts by Palestinians to break the border fence on Friday under the protection of smoke from Gaza in Israel. The military said the Palestinians threw explosives and incendiary bombs against Israeli troops.

Israeli troops responded on Friday with "counterinsurgency riots" and "live fires" in accordance with the rules of engagement, the IDF said. There were no reports of Israeli military casualties.

On both sides of the border between Gaza and Israel, tensions have come to be known by some Palestinians, alternately as "Friday of the Fire" or "Friday of the Tire" – a reference to the lit tires to cover the sights of Israeli sniper. It was the second in a series of "march of return" actions that were scheduled until mid-May.

The goal of the "march of return" protests, say the Palestinians, is to cross the border fence and return to their land that became part of Israel seven decades ago.

A UN High Level spokesperson Commissioner for Human Rights Liz Throssell said the Commissioner's office was "very worried" that more violence could begin in the coming days and urged Israel to respect the international rights of the demonstrators.

"In light of the numerous casualties and deaths, the ominous statements made by the Israeli authorities in the days leading up to the protest and indications that the killed or injured were unarmed or did not pose a serious threat to well-protected security forces – and in some cases even in fact, ran away from the fence – there is strong evidence that security forces use excessive force, "said Throssell.

"We reiterate the request of the UN Secretary-General for an independent and transparent investigation into these incidents in order to hold them responsible for those responsible." We also call on the leaders of both sides to do everything in their power to prevent further violations to prevent the loss of life. "

"We use water, tear gas and other means to try to distance rioters from our security fence, using deadly means sparingly and only against certain people who are a real threat to our security infrastructure "he told CNN.

"It's up to Hamas and it's their responsibility, and the fact that they're pushing these insurgents on the fence and breaking them means they're responsible for the civilian population in Gaza."

The United Nations Security Council has published for the second time on Friday rejected a press statement on violence in Gaza.

Diplomats, the United States did not approve the draft statement and prevented it from being released. "UN Rules stipulate that if a permanent member of the UNSC does not approve the publication of the draft press release, the issue will be blocked [19659003] CNN received a copy of the draft opinion.

" The members of the Security Council expressed their views Deep concern about the situation on the border of Gaza for the second week in a row. The members of the Security Council reaffirmed the right to peaceful protest and expressed their grief over the loss of innocent Palestinian life. "The draft also calls for an" independent and transparent investigation "of violence in Gaza