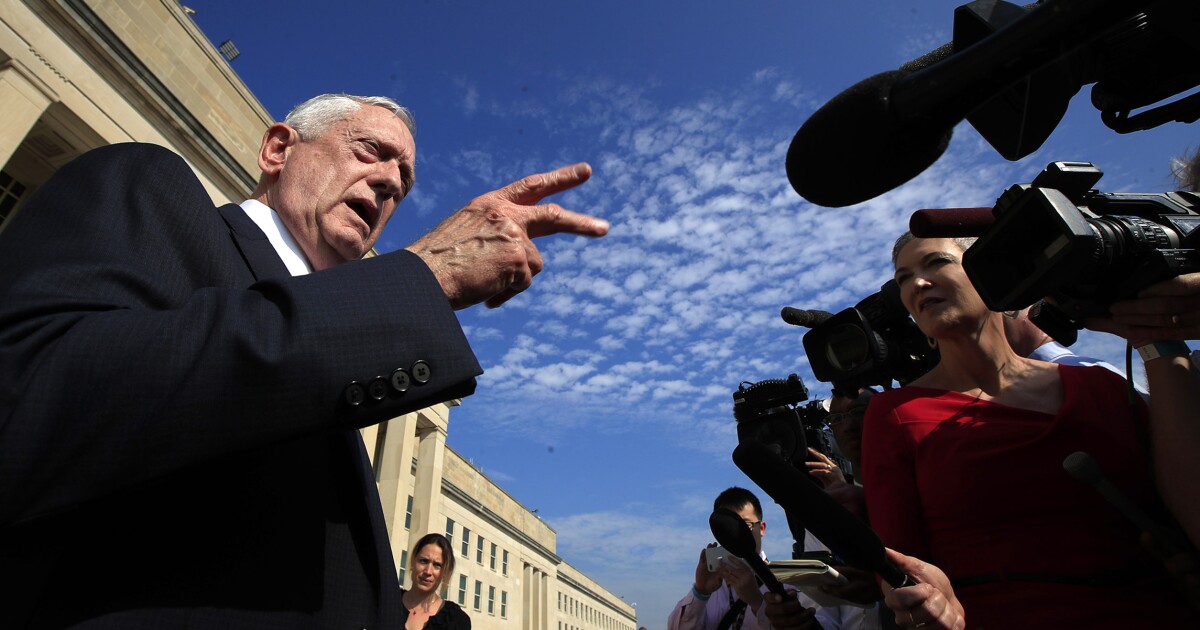 Some key phrases from a Wall Street Journal piece by General Jim Mattis, the former Secretary of Defense, serve as a not so veiled but so important warning to and about President Trump.

If Trump does not listen, we should both listen and act responsibly to find a reasonable alternative to the re-election of this President.

Mattis' essay, an adapted excerpt from an upcoming book speaks passionately against such unilateralism as Trump.

"Nations prosper with allies, and wither without them," writes Mattis. "America alone can not protect our people and our economy. At this time we can see thunderclouds rising. … A leader must show a strategic sense that includes respect for those nations that stood with us when difficulties arose. When we return to a strategic stance that includes the interests of as many nations as we can together, we can better deal with this imperfect world that we take together. Otherwise, we will take an increasingly lonely position, exposing us to increasing risk.

Compare this to Trump's hideous isolation at last weekend's G7 summit, in which he unpopularly and falsely wore water for the Russian dictator Vladimir Putin ignored the requests of other leaders to end his trade war with China quitting, defended the recent missile tests in North Korea and generally behaved like the caricature of the "ugly American" who was led to rather undesirable lives.

Mattis also expressed concerns about our citizenship: "Currently, our own community seems to be breaking up. What concerns me most as a military is not our external adversaries; it is our inner division. We share hostile tribes who cheer against each other, fueled by emotions and a mutual contempt that endangers our future, rather than rediscovering our commonalities and finding solutions. … We all know that we are better than our current policy. Tribalism must not destroy our experiment [American constitutional]. "

Evidently Trump does not nourish this harmful tribalism by mistake, but with pleasure.

Worst of all, though, Mattis writes books and columns instead of serving in the Pentagon. His essay contained a brief nod of why this happened.

"When my concrete solutions and strategic advice, especially trust in our allies, were no longer correct, it was time to step down," wrote Mattis.

This is a delicate way to express it. The reality is that Mattis has resigned because Trump has announced virtually without consultation that he would get away from one of the most impressive victories in US military history by withdrawing from Syria the small but deadly contingent of American troops extinguished.

Trump considered later after Mattis resigned, but Trump's commitment to the effort has failed our Kurdish allies.

Although Trump likes to claim he has exterminated ISIS, the truth is that ISIS is now reconstituted because Trump took the boot off his neck. While the Kurds are overwhelmed by a crisis of 60,000 angry jihadists / ISIS supporters (women and children and other relatives of fighters) imprisoned in porous "camps" in eastern Syria, the biggest winners in the rest of the country are The Brute Dictator Bashar Assad and his supporter Putin.

Jim Mattis was one of the most effective generals and defense ministers in US history. Writing instead of leadership is for him a sign of an incompetent, unstable presidency.

Marines, Mattis wrote, "expect that you have done your homework, mastered your profession. Amateur performances are an abomination. "Diplomatically and militarily, our current administration is unfortunately dangerously amateurish.