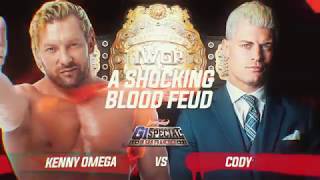 – Above is a preview of the upcoming NJPW G1 Special in San Francisco on July 7th (full map here). Kennedy Omega will join Cody in the fight against the IWGP heavyweight champion on the show.

– Last night, the Fighting Games Championships / NJPW CEOs held a show in Daytona, Florida with Kenny Omega and Kota Ibushi defeating Tetsuya Naito and Hiromu Takahashi. If you missed the event, it was streamed on CEOGaming's Twitch channel. Below are the full results:

– ROH has made "10 questions" with Christopher Daniels and asked him about his first impressions, which go back to being in the main event of ROH's first show.

"Honestly It was only a year later that I realized that Ring of Honor would be a long-lasting one," said Daniels. "For the first few months, it was one of many bookings I've had on the independent scene, but slowly and surely I saw a fanbase grow and a dressing room became a coherent crew of outstanding talent."