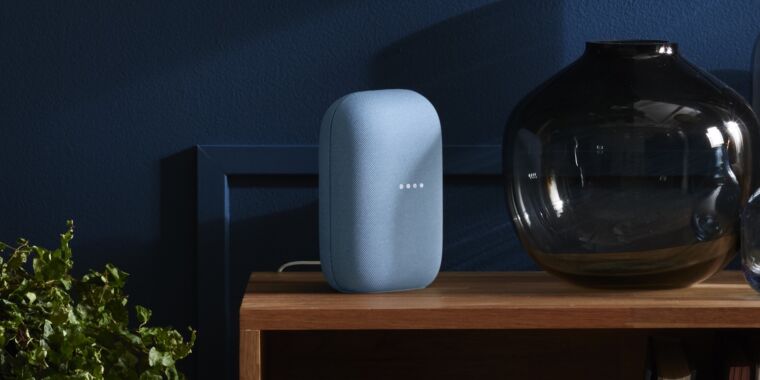 Say hello to Google’s next smart speaker, which is expected to replace the original Google Home. Earlier this week, the speaker leaked through tests on Japan’s FCC equivalent (which bears the much cooler name “Ministry of Internal Affairs and Communications” or “MIC”), and since MIC took some rather unflattering pictures, Google has decided to Determine the setting Just record and send an official press order to various press offices.

9to5Google mentioned the existence of this device back in June. The report said the spokesman had the code name “Prince” and was a replacement for the original Google Home. According to the report, the speaker had a “high-excursion speaker with 2-inch driver”, which would supposedly represent a sound upgrade compared to the current Google Home.

The new speaker has a fabric design with four lights on the front that matches the Nest Mini / Google Home Mini and Google Home Max. The old Google Home is the outlier in the Google product range with a hard plastic lid and 12 lights. The design doesn’t have much besides the fabric exterior. On the back you will find a DC barrel connector for the power supply, a “G” logo and a mute switch. A short video Google sent to XDA Developers shows a person sitting between two speakers. This suggests that the speakers can be paired as stereo devices. This function was previously only reserved for Google Home Max.

What do you call it?

We don’t really know the name of this thing, but it starts with “Google Nest,” a smart home brand that Google is transitioning to. These intelligent speakers used to be called “Google Home”. You can currently find two products with the old branding in the Google Store: the original “Google Home” speaker and the “Google Home Max”. For the new Nest material you have the “Nest Mini” (an upgrade to Google Home Mini), the Nest Hub (formerly the Google Home Hub Smart Display) and the Nest Hub Max (a larger Home Hub). Will this new gizmo be called “Nest Home”? The “nest speaker”? Nothing really fits the smaller “Nest Mini” speaker that sounds like a tiny thermostat.

Google has not scheduled an event that may start this. However, we do see a number of products that could cause a hardware event. There is the Pixel 4a, which is still missing after it did not keep the supposed start window for Google I / O in May. We’re also only about three months away from the launch of a new flagship smartphone by Google, which is the Pixel 5 this year. There is the Android TV dongle “Sabrina”, which sounds like the fusion of Android TV and Chromecast, and this speaker also has it.