Half of UK voters support the referendum on the Brexit deal, no deal or stay: Sky 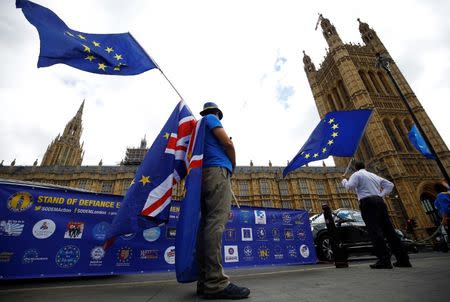 LONDON (Reuters) – Half of British voters support a referendum to decide between leaving the government and the EU. Sky News reported on Monday, citing the EU's own poll

The survey showed that 40 percent opposed such a poll, while 10 percent did not know.

With less than eight months to go before Britain leaves the EU, there is little clarity on how trade will flow Prime Minister Theresa May, who is dealing with a rebellion in her party, is fighting for a deal with the block

May has pushed ahead the plan for a so-called "no-deal" breakthrough, which is the fifth largest in the world. On March 21, 2019, the economy plummeted from the EU, a move that shook financial markets and shifts trade flows in Europe and beyond could.

The Sky poll found that 78 percent of voters believed the government would bargain for Brexit by 23 percentage points. Only 10 percent felt that the government was doing a good job.

When asked if they should choose between three options – May's deal, no deal or stay in the EU – 48 percent said they would rather stay in the EU, 27 percent wanted to go No Deal and 13 Percent would opt for the government's deal.

Eight percent said they would not vote while 3 percent did not know.

Sky Data interviewed from July 20 to 23, 2018, a nationwide representative selection of 1,466 Sky customers. Data is weighted according to the profile of the population.