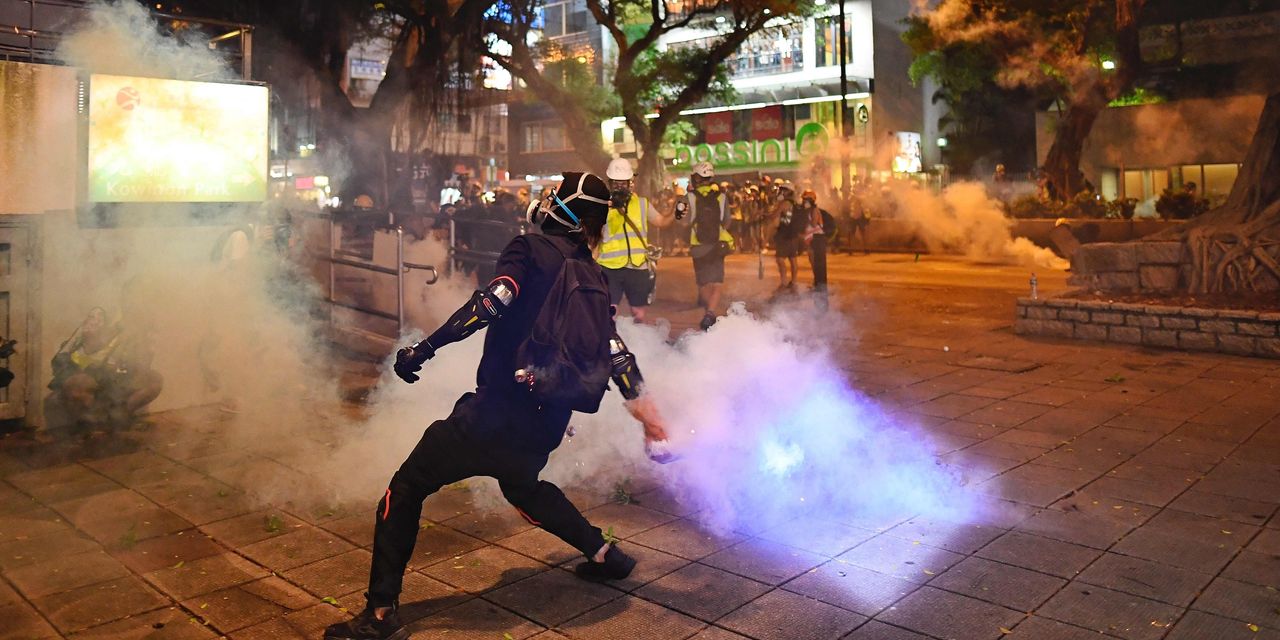 HONG KONG – Protests throughout the city worsened into urban battle scenes in several neighborhoods as demonstrators resisted severe warnings from Beijing and unleashed their message on the streets for a tenth weekend in often unpredictable directions.

] Thousands of demonstrators hit tourist attractions and neighborhoods on Sunday and built metal barricades, some throwing stones and what police identified as smoke bombs. Live footage showed at least one flaming projectile, which was apparently a Molotov cocktail. The police equipped with combat equipment used tear gas to disperse the masses. In the meantime, a peaceful sleep at the airport continued into the third day.

The fluid character of the increasingly violent protests poses a challenge to authorities and local residents. In the district of Wan Chai in front of the police headquarters, there was very little at 5 pm. Sunday, with people enjoying drinks in a popular bar. Only an hour later, demonstrators came and started building barricades and waving lasers to the police. Soon the riot police fired several salvos of tear gas. Bars closed and hotels lowered their shutters to bring guests to safety.

The protests this summer reflect the public's anger at the Hong Kong government, which was triggered by a law on extradition that would allow those in Hong Kong to be brought to justice under the opaque legal system of mainland China. The Hong Kong government finally stopped the bill and declared it "dead" but still had to formally withdraw it.

The protest movement has maintained its momentum – fueled by frustrations over the government's handling of the situation and allegations that the police have exploited excessive force in dispersing protesters and calling for democratic overhaul – even if Beijing's growing intolerance towards the Dissent has signaled and local authorities have said that ongoing tensions could plunge the city into recession Catchment of immigrants from Fujian province in southeastern China and scene of a clash between demonstrators and men who waved the stick a week earlier. In recent days, there have been rumors of a similar confrontation in social media. Pro China signs were installed on Sunday on a major business street along with the occasional Chinese flag.

Over 10,000 Hokkien-speaking people live near North Point, forming a community that has supported China since the 1960s. It was a major draw during a months-long uprising in 1967 when leftist Hong Kongers colluded with Beijing's support with the ruling British government.

On Saturday, representatives of the Fujian Group held a rally and vowed to protect their adopted country. They sang slogans in Mandarin and Cantonese supporting the Director-General and the police, and called for the violence to stop and the chaos to end. In a speech on Wednesday, China's senior Hong Kong official called on the city's patriotic residents to oppose violent demonstrators.

On Sunday, police and reporters gathered around a group of men in red T-shirts who said they were from Fujian. There were some arguments between the men in the red shirt and the reporters, and some local journalists argued fiercely. A crowd of press and the men ran briefly off the sidewalk into the street as they pushed and shoved. But at 19 o'clock. The demonstrators still had not turned up.

At some point, men chased a supposed demonstrator down the street, while other men lounging in front of shutters kicked and beat him. Dozens of police tried to stem the fighting and seemed to arrest a person. Several police officers parked in the area.

Like on Saturday, the protesters on Sunday spontaneously crowded around the entrance of a multi-port tunnel and let vehicles drive without paying tolls. They seemed to have accepted proposals from the chat groups frequented by demonstrators after the closure of a tunnel last Monday had angered other citizens.

The huge amount of hundreds of thousands of protesters at the beginning of the summer has become smaller. Groups of mobile protests using more aggressive tactics, such as: For example, lighting fires on roads and throwing objects at the police.

The police said Sunday they arrested 16 people the day before, including for unlawful assembly. Hong Kong police said they had taken nearly 600 arrests and fired more than 1,800 rounds of tear gas and at least 160 rubber bullets since the protests began two months ago.

-John Lyons and Jon Emont contributed to this article.

Fact check: Trump says some states are not at risk from the virus and denies that it would go away by April