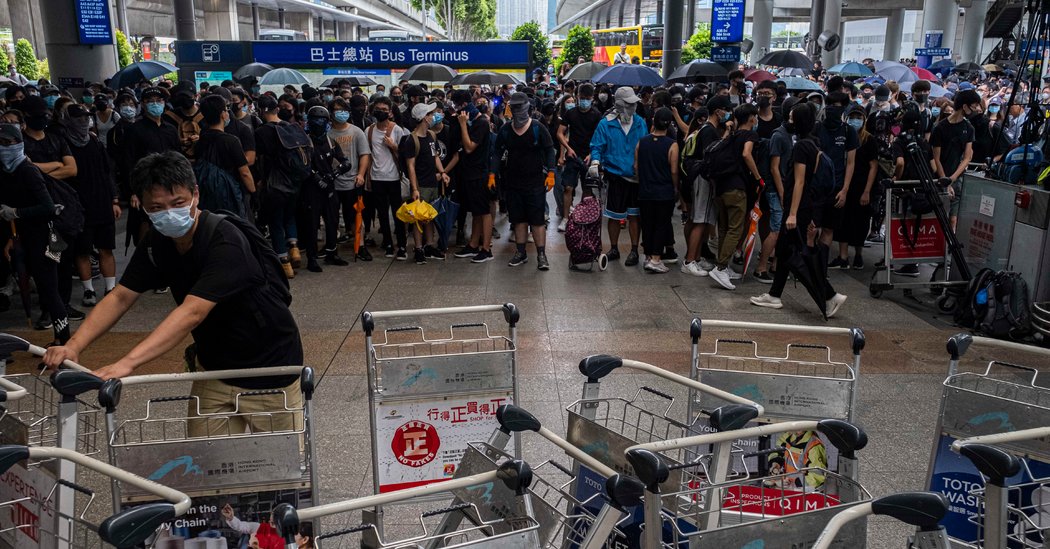 HONG KONG – Pro-democracy protesters in Hong Kong launched a new campaign on Sunday to block access to the airport, hours after one of the most turbulent days since protests began in the city in June.

Tens of thousands of people marched through parts of downtown on Saturday despite a police ban. Some demonstrators gathered around the local government headquarters where they threw bricks and firebombs as the police responded with tear gas, pepper spray and water cannons.

On Sunday, demonstrators gathered at Hong Kong International Airport to block access to the critical Asian travel hub. The airport has been closed to demonstrators since mid-August, when days-long sit-ins led to attacks on two Chinese mainland men and hundreds of canceled flights.

Classes begin for many Hong Kong students and schools on Monday could become the next front in the protest movement, which became angry over a delivery bill that would allow criminal suspects to be taken to mainland China. Since then, protesters' demands for universal suffrage and investigation into allegations of police brutality have increased.

[ How the protests in Hong Kong have evolved with changing tactics and more violence . ]

Hundreds of demonstrators gathered at the airport on Sunday afternoon, traveling by bus, car and on foot from a nearby subway station. A court order issued following the airport protests last month allows only passengers and airport employees to enter the main terminals. But outside near the entrances, demonstrators gathered and sang, "Fight for freedom! Get in touch with Hong Kong. "Some used their cars to block the lanes.

"We have been protesting and engaging for months," said 18-year-old student Daniel Chan, who took the bus to the airport. "Nevertheless, what we have done seems to be pointless."

Mr. Chan said he had no intention of doing anything illegal, but he was not worried about the court order. "There's almost nothing left to worry about," he said. "A document can not put me off."

MTR, the Hong Kong subway operator, announced on Sunday afternoon that the Airport Express train service was discontinued between the airport and downtown and later trains to the city later The throws of the demonstrators were set on rubble on the tracks. Tung Chung subway station, which is closest to the airport, was also closed on Sunday night, according to MTR, because demonstrators damaged the facilities.

The protests forced many travelers to seek alternative routes to the airport. Nicole Zhao, 38, was one of many who had to squirm, dodge and jump through the barriers built on the streets.

Zhao, who is from mainland China and works in education, had just landed in Hong Kong from Beijing when she was told by the airline that she should postpone her trip.

"What the demonstrators are doing is crazy," she said. "This only shows how different the systems in Hong Kong and on the mainland are."

Eric Jabal, 47, an education consultant, walked with his wheeled suitcase and suit jacket on debris walking by street, evading demonstrators and barricades. He said he left his house at 12:30. for 20.50 hrs flight to Bangalore and was on foot for 25 minutes after being dropped off by a Uber.

But Mr. Jabal, a Canadian living in Hong Kong for 25 years, said he did not mind the inconvenience.

"I'm really sad," he said. "That the failure of the leadership has led to such profound unrest among so many people – it has clearly gone beyond the turning point."

The students were an important part of the protests and the beginning of the lesson throughout the summer. Www.mjfriendship.de/de/index.php?op…80&Itemid=58 On Monday, the questions arose as to whether or not to start school Decrease in movement or activism would shift to campus. Chinese University of Hong Kong. Many students have also negotiated with school administrators to attend sit-ins or reserve classrooms for self-study or silent protests on the first day of school.

The education authorities indicated that students need letters from parents to skip this class or to participate in strike activities.

A high-ranking government official said on Sunday that the government "stubbornly" opposed the planned boycotts and called them "irresponsible."

"Schools are places of learning and absolutely no places for expressing political views or demands," Chief Secretary Matthew Cheung wrote in a blog post.

On Sunday, police in Hong Kong said they had arrested dozens of people in a subway station, some of whom were involved in the most violent violence of the weekend, as officers grouped a group of demonstrators in a train car and pepper spray sprayed.

Edia's face was covered with members of the special police force in dark uniforms storming into a waiting train car at Prince Edward Station, whirling with truncheons at men and women cowering on the floor, unable to resist. After heavy beatings, a policeman spilled the group on pepper spray and then left.

"The police were out of control," said Crystal Yip, a 20-year-old student who was in the police station when the police arrived. "They were crazy and they were crazy. They tried to express their anger through arbitrary attacks.

Yolanda Yu, chief police commissioner, said 40 people were arrested in the area on suspicion of unlawful assembly, criminal charges and obstruction of officials.

"Protesters used sticks and hard objects to attack the police. We responded to the situation with equal force, "Ms. Yu told a reporter and asked why the police used pepper spray on commuters kneeling on the ground.

She said the police warned civilians to stay away. "In chaotic circumstances, it is indeed difficult to determine if someone is a real journalist, a protester or a violent person," she said.

Violence at Prince Edward Station began during a dispute between protesters and some older men who insulted them. One of the men hit the demonstrators with a hammer, tossing water bottles and umbrellas, and later on firing extinguishers in the car. After the clashes, the subway system ceased operations in much of Hong Kong. Three stations were closed on Sunday.

Underground operator MTR has been targeted for vandalism since last month, when it began to stop operating stations near places where protests are planned. It continued this pattern on Saturday and stopped the service at Sai Ying Pun Station, near the Chinese Government Liaison Office, where protests took place.

"Chaos in Hong Kong Can not Go On!", An editorial in the Overseas Issue of People's Daily, the party's main newspaper, said Sunday. "At this crucial moment, the administration of the Special Administrative Region must have the courage and the skill to use all legal means to stop the violence and chaos, act decisively, arrest and arrest violent lawbreakers, and strictly apply the law to criminals quickly punish restoration of social order.

An online report from China's largest television channel, CCTV, said that Ms. Lam was to use emergency powers under a colonial-era decree to end the violent protests. This move could empower the Hong Kong government to ban demonstrators from wearing masks, accelerate arrests, and censor "harmful media."