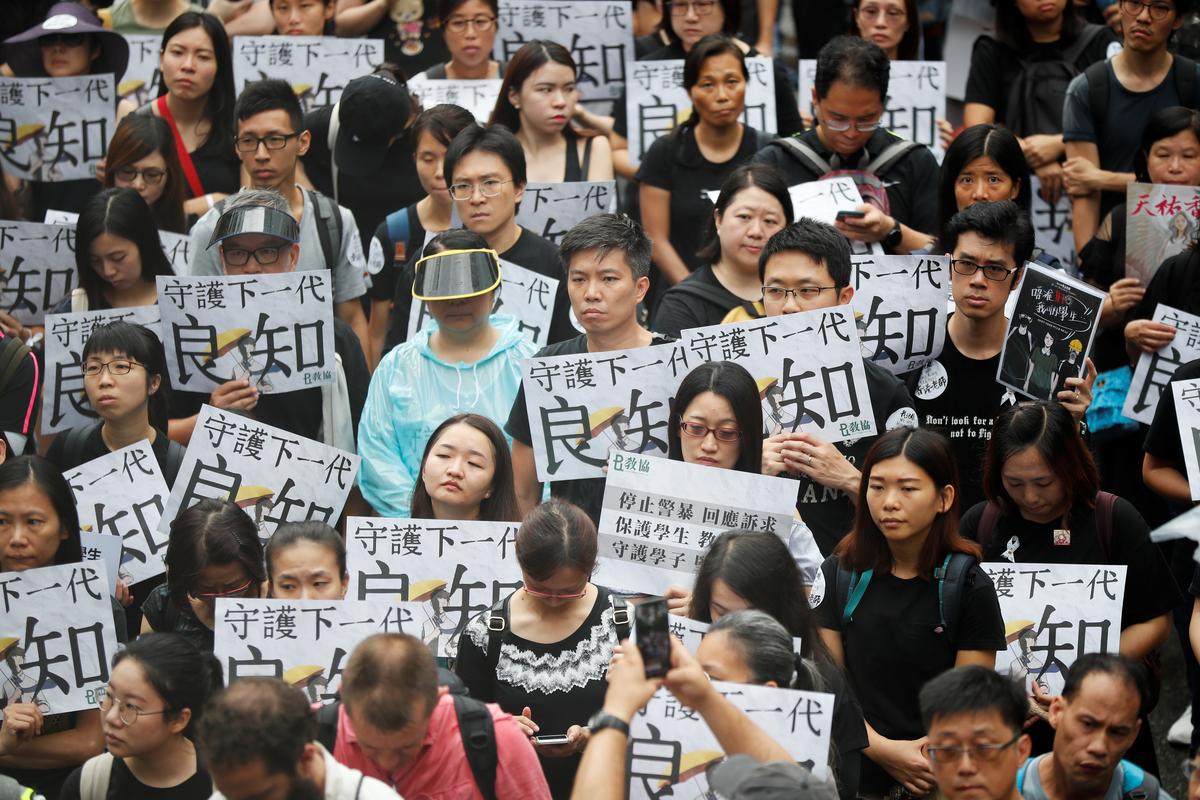 HONG KONG (Reuters) – Several thousand teachers and supporters of the Hong Kong school brave the storm on Saturday to start a weekend of anti-government protests, although police fear the tactic could be tightened to get activists off the streets to evict.

Following the escalation of violence in recent days Demonstrations this weekend will provide a litmus test of whether the protest movement can retain the broad support it apparently enjoys.

Protesters claim to erode the erosion of the One Country, Two Systems agreement, which sets some autonomy for Hong Kong since China rescinded Britain in 1997.

Over the past week, they have increasingly channeled their frustrations to the police, who have reacted with the utmost determination to remove them from the streets.

Yu, an over 40-year-old music teacher at a local secondary school, said she was determined to support protesting students, although she did not agree with all the actions.

"I appreciate their courage and their concern for Hong Kong … they are definitely more courageous than our government," she said.

The teachers 'rally – which, according to organizers' estimates, attracted 22,000 people while the police said 8,300 – had been approved by the police.

After peacefully gathering in the main business district, they marched on the governmental residence of Hong Kong's embattled leader Carrie Lam and sang "Hong Kong's police know the law, they break the law."

"If Carrie bothered to respond to our demands from the start, nobody would be hurt," said Lee, a retired primary school teacher.

Anti-government demonstrators were also expected to march through Kowloon districts, which are popular with merchants and tourists from mainland China.

The pro-democracy civil rights front, which held peaceful, million-strong demonstrations in June, has scheduled another protest on Sunday.

"We all feel tensions are rising and stress is rising," said 22-year-old frontman Pun Reuters during a sit-in at the international airport earlier this week.

"I know that violence can not fight violence, but sometimes aggression is required to attract the attention of the government and others," he said. "I threw stones … I was also beaten by the police with batons. We all get used to it slowly. "

Thousands of mostly young demonstrators had to stop their flights at Chek Lap Kok International Airport on Monday, disrupting flights until late Tuesday.

The increasingly violent clashes have plunged one of Asia's financial capitals into the worst crisis in decades. The riots are also one of the biggest challenges for Chinese President Xi Jinping since he came to power in 2012.

Western governments, including the US, have increasingly called for restraint after ugly and chaotic scenes at the airport.

On Friday, the CEO of Cathay Pacific Airways announced that China's aviation authority had asked Hong Kong Airlines to suspend or assist staff involved in the protests.

Chinese officials have compared some of the demonstrators' actions to "terrorism", and Chinese state media have demanded a harsher response from Hong Kong police.

In the past week, the clashes have worsened. Protesters shot marbles at the police with a fling, laser aimed at them, and sometimes thrown stones and firebombs.

After firing tear gas to disperse demonstrators on the streets and at a point in a subway station, the police warns that they could become tougher.

Although their stations have been targeted many times during the crisis, the police have so far refrained from using armored vehicles that could pierce barricades. They also did not use a water cannon – two were bought in 2014 – or the troop's dog squad was unleashed on protesters.

"We have a more flexible strategy," said a police officer. "We are in a much better position to respond more efficiently and faster."

Across the border, in the mainland city of Shenzhen, China's People's Armed Forces units have been doing extensive exercises in recent days, but the Hong Kong police say they can handle the situation.

With demonstrators pursuing a flash mob strategy that retreated as the police moved forward to reappear elsewhere, the police also used covert officials dressed as demonstrators to gather information and arrests make.

Police have arrested around 750 people since the riots began in June and have indicted some demonstrators for rioting that could lead to a 10-year sentence for punishment.

In some cases, the arrests were accompanied by extensive searches and seizures of telephones and computers, according to police sources.

"They're doing these hits and runs lately," a senior police officer told the media earlier this week. "Arrests should be a natural consequence. If we can arrest more and more people because they commit illegal acts, then so be it.