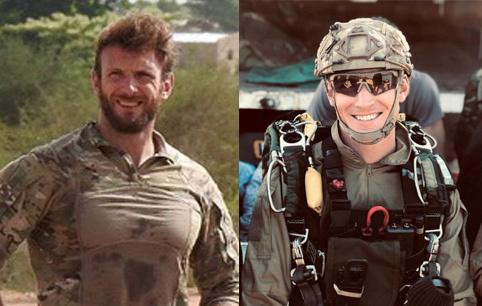 OUAGADOUGOU (Reuters) – Hostages freed by French commandos from militants in Burkina Faso offered their condolences on Saturday to the families of two French soldiers killed in the rescue operation.

The two French special forces soldiers Cedric de Pierrepont and Alain Bertoncello were killed in a night-time rescue of four foreign hostages including two French citizens in Burkina Fasso are seen in an undated photo released by French Army, May 10, 2019 Sirpa Marine / Handout via REUTERS

In a Daring raid over the night from Thursday to Friday, French special forces were kidnapped in neighboring Benin more than a week ago as well as an American woman and a South Korean woman who were being held with them.

The two Frenchmen, Laurent Lassimouillas and Patrick Picque, and the South Korean woman who met Burkinabe President Roch Kabore at the presidential palace in the capital Ouagadougou.

French President Emmanuel Macron at a Paris airport later on Saturday. The American, who has not been identified, is repatriated to the United States.

"All our thoughts go to the families of the soldiers and to the soldiers who lose their lives," said Lassimouillas in remarks to reporters.

"We wanted to present our condolences right to those families because we feel ambivalent about everything that happened to us," he said.

Lassimouillas so expressed the death of Beninese park guide, who was killed when the two tourists were kidnapped while safari in northern Benin before being spirited across the border into Burkina Faso.

French officials said they had kidnapped them in Benin but described their captors in Burkina Faso as "terrorists" who planned to hand over them to Qaeda affiliate Mali.

Jihadist groups with left to Qaeda and Islamic State have expanded their presence across West Africa's Sahel region, a strip of scrubland beneath the Sahara desert, in recent years and taken a number of Western hostages.

France, the former colonial power in the region, intervened in Mali in 2013 to stop by advance Islamist militants towards the capital Bamako and has kept about 4,500 troops in the Sahel since then.

"The zone where our two compatriots have been considered as a red zone … where you take a major risk by going," Le Drian said.

It's still unclear how the American and South Korean ended up as hostages. French officials said they had been in captivity for four weeks but did not believe the U.S. or South Korean governments were aware they were being held.